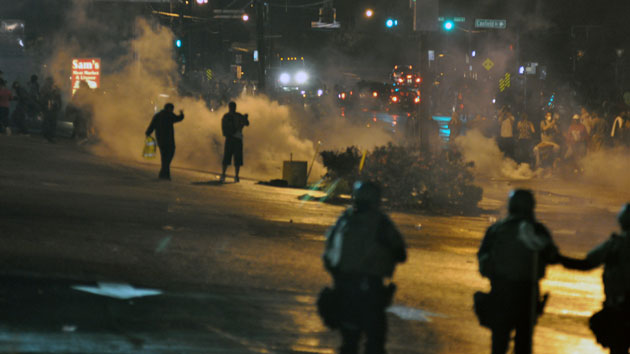 Every single US state fails to comply with global standards for police use of lethal force, according to an Amnesty International USA report that was released late last week. Several states allow the use of lethal force in order to “suppress opposition to arrest,” to “suppress a riot or mutiny,” and even to prevent an escape from prison. In some states, the report notes, deadly force can be used in cases of less serious crimes, like burglary. Only eight states require a verbal warning before law enforcement can start firing. And nine states have no laws dealing with the issue at all. All of which, Amnesty says, is out step with international standards established by the United Nations.

The report comes in the middle of a national debate on police violence after the high-profile killings of Michael Brown, Eric Garner, Tamir Rice, Walter Scott, Freddie Gray, and others. This year alone, law enforcement officers throughout the nation have fatally shot more than 500 people, a trend that, if it continues, could reach 1,000 police homicides by the end of the year. In this regard, the United States performs far below other countries that more closely follow the international standards. In the United Kingdom, for example, the police force is unarmed as a matter of course. Its “firearms officers” undergo extensive training and can only use deadly force when authorized by a superior. As the Guardian recently reported, police in the United States kill more people in days than other countries do in years.

Amnesty’s analysis reviewed use of deadly force laws in every state where such laws exist and compared them to the UN guidelines. Amnesty’s determination? US state laws are “too broad” to protect citizens from police-involved killings. While UN principles dictate that police should use deadly force only as a last resort—in “unavoidable” circumstances—US state laws allow for police to use deadly force in “a wide range of circumstances.” Nowhere in the United States are states legally required to make the preservation of life a top priority for governing how police use lethal force. What’s more, no state laws include provisions for holding officers accountable.

“If the United States is to comply with its international legal obligations on human rights, these policies must be brought in line with international law and standards,” said Steven W. Hawkins, executive director of Amnesty International USA, in a statement accompanying the report. “The fact that absolutely no state laws conform to [the international] standard is deeply disturbing and raises serious human rights concerns.”

In a recent analysis, Vocativ, an investigative and deep web news outlet, found that fatal police shootings in the United States outnumber all criminal gun homicides in 30 other developed nations:

These numbers likely underestimate the true dimensions. As Amnesty notes, while it’s clear that “hundreds of men and women are killed by police each and every year across the United States…no one knows exactly how many because the United States does not count how many lives are lost.”

Here’s a passage from the report outlining its key findings:

All 50 states and Washington, D.C. fail to comply with international law and standards on the use of lethal force by law enforcement officers.

Nine states and Washington, D.C. have no laws on use of lethal force by law enforcement officers: Maryland; Massachusetts; Michigan; Ohio; South Carolina; Virginia; West Virginia; Wisconsin, Wyoming; and the District of Columbia.

Thirteen states have laws that do not comply even with the lower standards set by US constitutional law on the use of lethal force by law enforcement officers: Alabama; California; Delaware; Florida; Mississippi; Missouri; Montana; New Jersey; New York; Oregon; Rhode Island; South Dakota; and Vermont.

None of the state statutes require that the use of lethal force may only be used as a last resort with non-violent and less harmful means to be tried first.

No state limits the use of lethal force to only those situations where there is an imminent threat to life or serious injury to the officer or to others.

Nine states allow for the use of lethal force to be used to suppress a riot: Arizona; Delaware; Idaho; Mississippi; Nebraska; Pennsylvania; South Dakota; Vermont and Washington.

Only eight states require that a warning be given (where feasible) before lethal force is used, however no state meets the requirement for a warning under international standards: Connecticut; Florida, Indiana; Nevada; New Mexico; Tennessee; Utah and Washington.

Only three states provide that officers should create no “substantial risk” to bystanders when using lethal force: Delaware; Hawaii and New Jersey.

Only two states provide by statute for training on the use of lethal force: Georgia and Tennessee.

None of the states’ “use of lethal force” statutes include accountability mechanisms, including for example the requirement of obligatory reporting for the use of force and firearms by law enforcement officers.

The Amnesty report doesn’t examine use of force in jail cells, but the existing problem was highlighted Monday when the Supreme Court issued its decision on excessive use of force in pretrial detention. The justices sided with the plaintiff in a claim in which jail officers allegedly slammed his head against a hard surface and used a taser on him for several seconds—even though he was handcuffed and lying face down.

Whether it’s excessive force occurring in jails or in other circumstances, as Hawkins put it in his statement, “Reform is needed and it is needed immediately. Lives are at stake.”