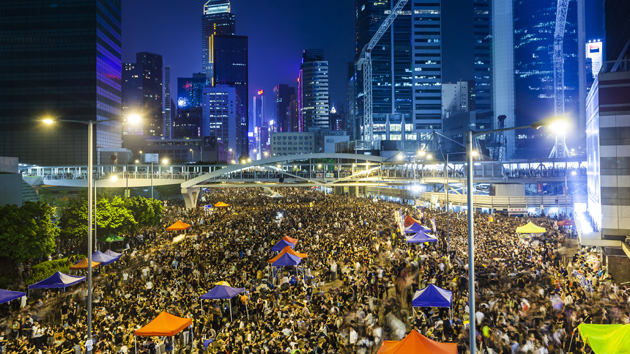 Last fall, the streets of Hong Kong filled with protestors demonstrating for greater autonomy after China proposed an election system that would undermine their right to vote for the city’s highest official. Students and concerned citizens camped outside of government buildings and blocked major thoroughfares for weeks on end wielding umbrellas to protect against police tear gas (leading to the name “Umbrella Revolution”). Eventually the demonstrations lost steam and protestors acquiesced to government demands to evacuate the streets. Many feared that the end of the protests meant a win for China and a blow to democracy in Hong Kong.

However early Thursday, Hong Kong’s legislature voted down the Chinese proposal that instigated the massive demonstrations. Pro-democracy supporters are calling it a major legislative victory. In order to understand why, we have to back up a bit.

Hong Kong becomes part of China…sort of: In 1997, the United Kingdom handed over control of Hong Kong to China. Under an agreement known as “one country, two systems,” however, China promised that Hong Kong would maintain political autonomy and many civil liberties that are not afforded to mainland Chinese (Vox does a good job laying out this confusing transition). One right citizens of Hong Kong did not get was the ability to directly vote for the city’s executive chancellor. Instead, a mostly pro-Beijing 1,200-member election committee has chosen the leader through simple majority every 5 years. In 2007, though, China told Hong Kong it would be allowed to elect its leader by popular vote in 2017.

Fall 2014, protests begin: But then, in August of 2014, the Chinese Communist Party released a proposed election plan outlining their version of a popular vote. In it, a special committee controlled by the Chinese Communist Party would choose up to three candidates for whom Hong Kong’s 5 million eligible voters could cast a ballot. Hong Kong’s current chief executive, Leung Chun-Ying, supported the proposal but thousands of Hong Kong citizens viewed this system as a “sham democracy” that would allow China to continue exercising control over Hong Kong. They took to the streets flooding the area surrounding Hong’s Kong’s government buildings for weeks before finally going home.

Okay, so what just happened: Hong Kong’s Legislative Council voted today on whether or not it would enact the the election system proposed by China. It was struck down with only 8 lawmakers out of 70 voting for the proposal, a big hit to the Chinese Communist Party and victory for the pro-democracy camp.

What‘s next: Pro-democracy activists are praising the legislature’s move, but also point out there is a long way to go before real democracy is achieved. Because China’s election plan was voted down, the current system will stay in place until at least 2022. Some believe a more productive short-term approach to reforming Hong Kong’s election system would be pushing the current election committee to better represent the people of Hong Kong instead of Chinese interests.