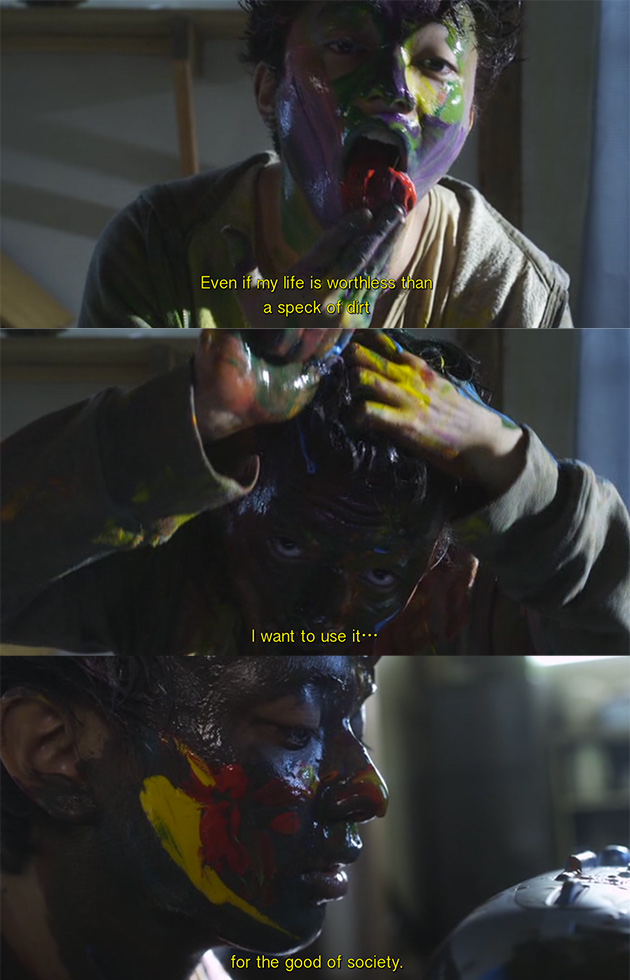 Screenshots taken from the film Himizu.

Among the many violent and racist images in the apparent manifesto of Dylann Roof, the alleged mass murderer, is something slightly more exotic: a reference to the 2011 ultra-violent Japanese crime drama, Himizu (a New York Times “Critics Pick”). The manifesto uncovered on Saturday morning reads: “To take a saying from my favorite film, ‘Even if my life is worth less than a speck of dirt, I want to use it for the good of society’.”

The movie, adapted from a popular manga by director Sion Sono, is set in tsunami-hit Japan in 2011, and follows the story of two teenagers—unloved, unwanted—struggling to survive amid the chaos wrought by the earthquake, and corruption. It’s a twisted and dark coming-of-age story (at some points a romance) that is beautifully shot and scored, but I wouldn’t say it’s an easy watch.

The full scene in which that quote appears is in many ways far more disturbing than the quote in the manifesto, and might contain even darker clues about what might have inspired Roof’s attack at the Emanuel AME church in Charleston, S.C., on Wednesday, which killed nine people. One of the main characters, Sumida—a brooding, angry boy—is recording his own voice onto a tape deck, preparing for an act of mass violence in the streets of Japan:

It’s May 7, the first day of the rest of my life. No police, no suicide. I guess I’m stingier than I figured. Even if my life is worth less than a speck of dirt. I want to use it for the good of society. I must have been born to do some good. I’ll kill idiots who trouble citizens.

Sumida has just brutally attacked and killed his father in a fit of rage in the previous scene. Caked in mud, he returns to a trailer to contemplate his next steps—some kind of vigilante justice—covering his face and body in multi-colored paints, and rather calmly intoning his plans. He then takes a large knife and begins killing people.

The choice of a Japanese film might seem peculiar at first, given the manifesto is a white supremacy rant. But in a section titled “East Asians”, the essay reads: “Even if we were to go extinct they could carry something on. They are by nature very racist and could be great allies of the White race. I am not opposed at all to allies with the Northeast Asian races.”

The film was widely praised by reviewers. The Guardian wrote that the director “Sono retains his go-for-the-throat approach, but the violence here somehow connects with the brutal economic conditions, and he fosters very tender, affecting performances.”

If Roof watched the whole film, he surely missed the point—the moral universe of the film is pretty clear. The film ends with Sumida’s friend Keiko convincing him to give himself up to the police and seek redemption. The end of the film, tracking through the rubble left by the tsunami, is especially haunting.

Roof did the opposite: he extinguished the hopes and dreams of so many innocent people and their families on Wednesday night.

Watch the film’s trailer below:

Himizu (trailer) from Cinefamily on Vimeo.