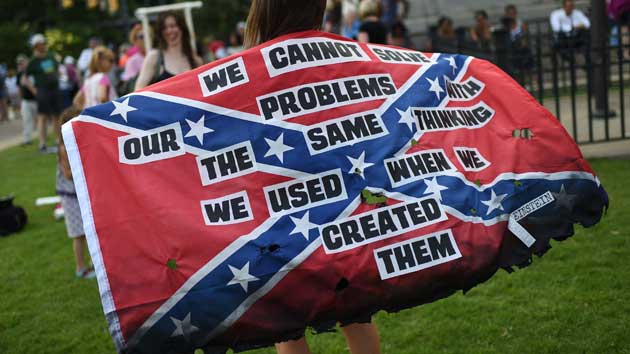 Protesters hold signs during a rally to take down the Confederate flag at the South Carolina Statehouse. Rainier Ehrhardt/AP

Within a week of the murders of nine black church congregants in Charleston, South Carolina, southern politicians and GOP presidential hopefuls have been pressured to address the continued flying of the Confederate flag. Previously justified as a symbol of Southern pride and history, the flag—and all its racist baggage—has become more difficult for prominent supporters to defend. This became increasingly clear over the weekend when a website apparently belonging to suspected shooter Dylann Roof emerged, featuring a racist screed and photos of Roof posing with white supremacist insignias and a Confederate flag license plate.

Right after the murders, South Carolina Gov. Nikki Haley said, “It’s him, not the flag,” but by Monday afternoon, flanked by a bipartisan group at a news conference, she announced her support for the flag’s removal from state Capitol grounds. Standing next to her was Sen. Lindsey Graham, another former flag supporter. Since then it has been like Dixieland dominos, with conservative politicians, southern state leaders of all stripes, and  corporations including Walmart coming forward to support the flag’s removal.

The shifting tide has been accompanied by some telling statements:

The day after the murders, Republican South Carolina State Rep. Norman “Doug” Brannon, a former Confederate flag supporter, announced plans to sponsor legislation that would have the flag removed from the state Capitol grounds. Brannon was close friends with state Sen. Clementa Pinckney, one of the victims in the church attack, which catalyzed his move to abandon the flag. “What lit a fire under this was the tragic death of my friend and his eight parishioners,” he told the New York Times last week. “It took my buddy’s death to get me to do this. I feel ashamed of myself.”

Gunn was one of the first to speak out after Haley’s announcement. He took to Facebook, where he left the following message:

We must always remember our past, but that does not mean we must let it define us. As a Christian, I believe our state’s…

On Friday, Graham defended the south’s affinity for the Confederate flag, saying it is “part of who we are,” but by Monday he was standing with Haley opposing it. “After the tragic, hate-filled shooting in Charleston, it is only appropriate that we deal once and for all with the issue of the flag,” the senator and presidential hopeful said in a statement following his appearance behind Haley. “I hope that, by removing the flag, we can take another step toward healing and recognition—and a sign that South Carolina is moving forward.” While Graham wants to remove the flag from the Capitol grounds, that doesn’t mean he is totally against its use. In a tweet Monday, he indicated it should still be flown and not completely eliminated.

Today, I am urging that the Confederate Battle Flag be removed from statehouse grounds to an appropriate location.

Taking to social media, the senator waited until Monday before releasing a statement on the Confederate battle flag:

.@SenateMajLdr McConnell on Confederate Battle Flag: “the time for a state to fly it has long since passed” pic.twitter.com/5uKy19uE54

On Tuesday evening McConnell made calls for a statue of Jefferson Davis, the president of the Confederate States of America, to be moved from the Kentucky state Capitol to a museum. While McConnell was vocal about this Jefferson Davis statue being removed, he did not have comments about the one currently on display within the US Capitol’s Statuary Hall.

On Tuesday, Gov. McAuliffe took steps to ban the Confederate flag from state license plates. “Although the battle flag is not flown here on Capitol Square, it has been the subject of considerable controversy, and it divides many of our people. Even its display on state issued license tags is, in my view, unnecessarily divisive and hurtful to too many of our people,” McAuliffe said in a statement. Prohibiting the flag on license plates falls in line with a a recent US Supreme Court ruling that gives states the authority to restrict certain plate designs.

Gov begins to remove Confederate flag from VA license plates – “We do not support the message it sends to the world.” http://t.co/IEZQMBNzVw

Over the weekend, Walker spoke at the Road to Majority 2015 convention, where he told the room of religious conservatives that he denounced the Charleston massacre. While he was quick to call the shooting a “racist” and “evil” act, he was uncharacteristically reticent about the Confederate flag. Walker said he predicted South Carolina would have some “good healthy debate” about the topic, but that it should be contained to “South Carolina among officials at the state level.” Following Haley’s announcement and the other GOP candidates backing her decision, Walker has discovered his opposition to the Confederate flag, tweeting:

I am glad @nikkihaley is calling for the Confederate flag to come down. I support her decision – SKW

The potential presidential hopeful also took to Twitter to express his support for Haley:

The retired neurosurgeon will not say if the flag should stay or go, noting that all these statement supporting the removal of the flag lack substance and action and ultimately will not fix or erase our nation’s race issues. “So often as a society we deal with the symptoms without dealing with the disease and we think we’ve done something,” Carson said in a telephone interview with the Wall Street Journal.

Gov. Bill Haslam of Tennessee has lifted a page from McAuliffe’s book, saying he supports the removal of the flag from specialty license tags. (In 2012, he signed a bill allowing the Confederate flag to go on motorcycles.)

CNN has reported that Clinton will be giving a speech on Tuesday at Christ the King Church outside of Ferguson, Missouri, where she plans to support the removal of the Confederate flag but also stress that these actions alone are not a solution to our nation’s racial tensions.

There are others who will not be moved:

It’s unclear what Huckabee’s thoughts on the flag are, but he is clear about his views on God. Over the weekend he said he did not believe the question of the flag was one for presidential candidates. But during a Fox News appearance on Monday, he said, “I don’t think the president of the United States needs to be picking the symbols that fly on the state Capitol grounds.” He continued “I keep hearing people saying we need more conversations about race. Actually we don’t need more conversations. What we need is conversions because the reconciliations that changes people is not a racial reconciliation—it’s a spiritual reconciliation when people are reconciled to God.”

Speaking on MSNBC’s Morning Joe on Tuesday, a day after the South Carolina governor’s call for action, Barbour said he is “not offended at all” by the Confederate flag. This, however, isn’t surprising. In 2011 he came under criticism when he refused to condemn a proposed state license plate that honored a Confederate general and early Ku Klux Klan leader Nathan Bedford Forrest. Not all in Barbour’s family, however, are for the flag. In a sign of a hopeful and eventual changing of the guard, Barbour’s nephew Henry took to Twitter expressing the need for change.

MS voted 2:1 to keep our state flag in 2001, but I’m change. I understand why many will want to keep it – respect that. just disagree

Of course, South Carolina Gov. Haley cannot alone call for the flag’s removal. As politicians and companies across the nation weigh in on the topic, the big question is how local leaders will respond. The Post and Courier reached out to legislators across the state to see where they stand on the flag’s removal. As of 2 p.m. EST, 51 state House representatives and 21 state senators said they believed it should be removed.

Even corporations are starting to jettison the controversial symbol from inventory. “We never want to offend anyone with the products that we offer,” Walmart spokesman Brian Nick said in an emailed statement to USA Today. “We have taken steps to remove all items promoting the confederate flag from our assortment—whether in our stores or on our web site.” While Sears Holdings, which runs K-Mart and Sears, does not currently sell Confederate flag merchandise in its brick-and-mortar stores, it sells this type of merchandise online through a third-party vendor, and recently announced that it plans to discontinue these sales. Ebay followed suit, saying it would ban the listings of Confederate flags or any related items with images of the flag.

But one retailer is profiting from attacks on the flag. Amazon reports its sales of Confederate flag memorabilia have increased by 2,300 percent.