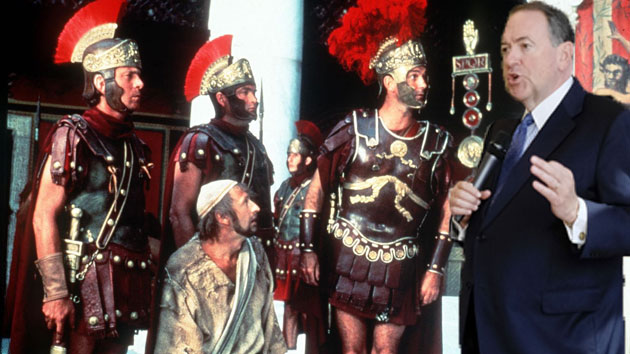 Good luck tracking down sermons from Mike Huckabee’s two decades as a Baptist preacher. The GOP presidential candidate, who once started a television station out of his church to broadcast his sermons, kept those tapes under wraps during the 2008 presidential campaign.

Among the handful of sermons open to the public is a partial recording of a 1979 sermon in Arkadelphia, Arkansas, at the congregation Huckabee had tended as a pastor a decade earlier when he was a student at Ouachita Baptist University. The sermon, included in the school’s special collections, catches a young Huckabee confident in his beliefs and fluid in his rhetoric, riffing from one New Testament passage to the next in critiquing the most “pleasure-mad society that probably has ever been since Rome and Greece, in the days when there was just absolute chaos and debauchery on the streets”:

It’s a sad thing but it’s true in this country: 10,000 people a year are directly killed by alcohol in this country. Ten thousand. But we license liquor. There’s one person a year on average killed by a mad dog, just one. But you know what we do? We license liquor, and we shoot the mad dog. That’s an insane logic! But it’s what’s happening, it’s because we love pleasure more than anything else. A lot of times we look around our society we see this problem we see pornography and prostitution and child abuse and all the different things that we’re all so upset about. You know why they’re there? You know why they’re in the communities? You say “because the Devil”—they’re there because of us.

It was dark days indeed, he argued, when “an x-rated theater can open up down the street from a church.” Above all, Huckabee was upset with Monty Python’s 1979 movie, Life of Brian. Huckabee was hardly alone in condemning Life of Brian, which follows the story of a Jewish man, Brian, who is mistaken for the Messiah because he was born on the same day as Jesus. The film was banned in Ireland; picketed in New Jersey; denounced by a coalition of Christian and Jewish leaders; and canceled in Columbia, South Carolina after a last-minute intervention from Republican Sen. Strom Thurmond. (On the other hand, the movie does have a score of 96 at Rotten Tomatoes.) Per Huckabee:

There was a time in this country when a movie like The Life of Brian which, I just read—thank God the theaters in Little Rock decided not to show, but it’s showing all over the Fort Worth–Dallas area, which is a mockery, which is a blasphemy against the very name of Jesus Christ, and I can remember a day even as young as I am when that would not have happened in this country or in the city in the South.

No word on whether Huckabee will defund the Ministry of Silly Walks if elected.