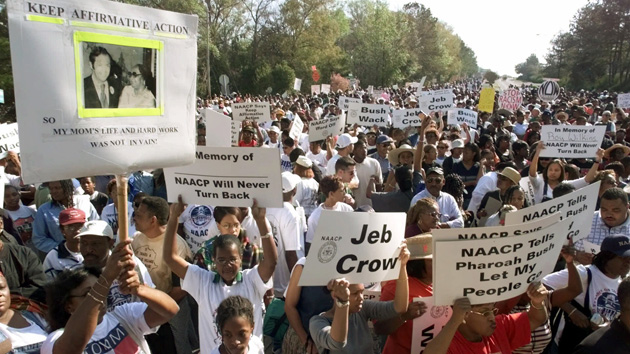 As he courts conservatives skeptical of his right-wing bona fides, Jeb Bush, an all-but-announced GOP presidential candidate, has cited one of his most controversial moves as Florida’s governor to illustrate his record of standing firm on principle in the face of widespread opposition: his decision to unilaterally end affirmative action in Florida. “Trust me, there were a lot of people upset by this,” he boasted to activists at the Conservative Political Action Conference earlier this year. But Bush’s effort to dismantle affirmative action in state college admissions and government contracting and hiring—which the Sun Sentinel dubbed the “most grievous blunder” of his tenure and a “prime example of Bush’s shoot-first, take-no-advice method of governing”—illustrates more than his executive style. At a time when racial tensions from Baltimore to Ferguson, Missouri, are a national issue, Bush’s fight against affirmative action, which led to a confrontation with the state’s black community, remains a significant episode in his political history.

In 1999, Bush’s first year as governor, Ward Connerly, the anti-affirmative-action crusader who had spearheaded successful ballot initiatives to eliminate racial preferences in California and Washington, descended on Florida to gather signatures for a similar measure that would appear on the November 2000 ballot. Bush was no fan of what he called Connerly’s “divisive” approach. (Republican support for Connerly’s amendment in California had pushed minority voters away from the GOP and helped Democrats take control of Sacramento.) But Bush also expressed skepticism about Florida’s affirmative-action policies, which he described in one private email as “stupid and destructive.” So Bush decided to preempt Connerly’s effort by ending affirmative action in Florida himself. He did so by signing Executive Order 99-281 on November 9, 1999.

Alongside his executive order, Bush proposed replacing affirmative action at Florida’s state-run universities and in government contracting with an initiative he called One Florida. Under the new plan, students in the top 20 percent of each public high school class would be guaranteed admission to one of the state’s public universities. On the contracting side, Bush’s order wiped out set-asides and price preferences for minority-owned businesses. Instead, Bush sought to increase diversity in procurement by streamlining the certification process for minority vendors and encouraging purchasing officers to reach out to minority businesses.

From the outset, many observers suspected an ulterior motive lurked behind Bush’s executive order. With George W. Bush then the likely GOP nominee for president, Connerly’s contentious proposal could be expected to drive Democratic-leaning black voters to the polls in the 2000 election and potentially imperil his path to the White House. CNN’s Inside Politics dubbed Bush’s executive order the “political ‘Play of the Week.'” Bush denied that his brother’s presidential ambitions had influenced his decision, but the mere suggestion was damaging. For African Americans, “it was like their interests are being subordinated to the political interest of the Bush family,” says Florida State University political scientist Lance deHaven-Smith.

“I was there for most of his two terms in the Legislature, and I can tell you right now, it was a tough task dealing with Jeb Bush. As many people say, it was Jeb Bush’s way or no way at all.”

The public outrage triggered by One Florida largely focused on Bush’s decision to act unilaterally. “It was a very high-handed way to make a very controversial decision,” notes deHaven-Smith. Black legislators complained bitterly of being left out the process of crafting a policy that would have a significant impact on their community. “He never talked to me. He never talked to any African Americans that I knew about what he was doing,” recalls former state Sen. Les Miller, who served as the Democratic minority leader at the time. “It was a slap in the face.”

In the weeks after Bush unveiled his executive order, African American leaders rallied against One Florida. In late November 1999, black lawmakers held a protest in Orlando. In Washington, Rep. Corrine Brown (D-Fla.) called on federal agencies to determine whether One Florida squared with federal law and an existing desegregation agreement between the state and the federal government. She also encouraged African Americans to “deal with his brother”—then presidential contender George W. Bush—at the polls. State Sen. Daryl Jones, chair of the black legislative caucus, used One Florida as a rallying cry to register black voters ahead of the 2000 elections.

To fully implement One Florida, Bush needed the State University System Board of Regents to approve his ban on racial considerations in state college admissions. In a twist not lost on Bush’s critics, the regents vote was scheduled for Friday, January 21, the week of Martin Luther King Jr. Day. A few days prior to the vote, in a last-ditch effort to convince Bush to scrap his plan, a handful of black state lawmakers met with Lt. Gov. Frank Brogan at the state Capitol to make their case. During the meeting, Bush briefly popped in, telling the lawmakers that if they were waiting for him to rescind his executive order, “you might as well get some blankets,” according to the Orlando Sentinel. Democratic state Sen. Kendrick Meek (who would later serve in Congress) and state Rep. Tony Hill responded by staging a sit-in on the spot.

The protest was a public relations disaster for Bush, with newspapers likening it to the civil rights demonstrations of the 1960s. As Meek and Hill camped out in executive office suite into the evening—and a couple hundred protesters gathered outside the Capitol singing “We Shall Overcome”—Bush ordered his aides to “throw their asses out.” The remark that was caught on video in time for the nightly news.

The protest lasted into the next afternoon, ending only after Bush promised to delay the Board of Regents vote by a month. During that time, a panel of legislators held three public hearings on One Florida. The regents ultimately voted to implement Bush’s One Florida plan—but the protests continued.

On March 7, 2000, when Bush delivered his annual State of the State address, more than 10,000 people marched down Tallahassee’s Apalachee Parkway, the main artery leading to the Capitol. As Bush defended One Florida in his speech, demonstrators led by Rev. Jesse Jackson protested outside.

Bush ultimately got his way, but at the cost of his standing among black Floridians. After his first failed campaign for governor in 1994, when Bush was asked what he would do for African Americans and responded “probably nothing,” he had attempted to reach out to the black community. This effort included cofounding a charter school in inner city Miami. During his second gubernatorial bid in 1998, Bush vigorously campaigned in black neighborhoods and won endorsements from several prominent black leaders. He ended up winning about 14 percent of the black vote—a significant feat for a Republican. But One Florida helped diminish the good will Bush had built up, as did his administration’s flawed effort in 2000 to purge the state’s voter rolls of felons. When Bush ran for reelection in 2002, his support among black voters dropped by more than 50 percent.

After that, Bush “definitely tried” to mend relations with the African American community, notes deHaven-Smith, the FSU political scientist. Just a few months after the massive One Florida march in June 2000, Bush signed off on the creation of a law school at the historically black Florida A&M University. Throughout his tenure, he made an effort to appoint African Americans to judgeships. (He appointed 41 black judges—about 10 percent of his judicial appointments—in his eight years in office.) But One Florida and the voter purge turned African Americans against Bush early in his tenure. “They’re not going to change their minds about him for a century,” de-Haven-Smith predicts.

Bush’s One Florida move was indicative of his go-it-alone governing style. Bush seemed proud of this. Ten days after signing the executive order ending affirmative action, he wrote to a supporter, “I have always felt that big hairy audacious ideas need to be implemented rather than talked about.” Bush did become “more willing to respectfully disagree” in the ensuing years, says Matthew Corrigan, a professor at the University of North Florida and the author of Conservative Hurricane: How Jeb Bush Remade Florida. But when it came to making decisions without much consultation, Corrigan says, Bush didn’t change much: “He’s in charge and believes in executive power.” Former state Sen. Miller recalls, “I was there for most of his two terms in the Legislature, and I can tell you right now, it was a tough task dealing with Jeb Bush. As many people say, it was Jeb Bush’s way or no way at all.”

As Bush gears up for a likely White House bid, he has portrayed One Florida as a success. “We ended up having a system where there were more African American and Hispanic kids attending our university system than prior to the system that was discriminatory,” he declared at CPAC in February. But over the past 15 years, One Florida has produced mixed results, and PolitiFact rated Bush’s CPAC statement “mostly false.” (Bush’s spokeswoman did not respond to multiple requests for comment.)

Black freshmen enrollment at state universities has declined under One Florida, from about 18 percent in 2000 down to 13 percent in 2013. (The state’s black population has remained stable at around 20 percent.) The numbers are worse at Florida’s best public universities. From 2000 to 2009, black enrollment dropped by 15 percent at FSU—African Americans now account for only 7 percent of the incoming class, according to a Washington Post investigation. At the University of Florida in Gainesville, the state’s other flagship school, blacks make up 6 percent of freshmen, down from around 12 percent in 2000.

Latino enrollment numbers climbed, however, at pace with the the state’s growing Latino population. In 2013, Latinos accounted for 27 percent of the state population and 28 percent of freshmen in the state university system. Before One Florida, Latinos were underrepresented; they comprised more than 20 percent of the population, but only 12 percent of enrolling freshmen.

Bush considers One Florida—and even the controversy he endured to implement it—as a campaign asset. It’s part of his sales pitch to Republicans who think he’s too squishy on such issues as immigration or Common Core. But for African Americans in Florida, it’s a bitter reminder of a civil rights battle lost. “His affirmative-action position was his most direct perceived attack at the African American community during his tenure as governor,” recalls Florida Democratic strategist Ben Pollara. “I promise you that people remember what Jeb did.”