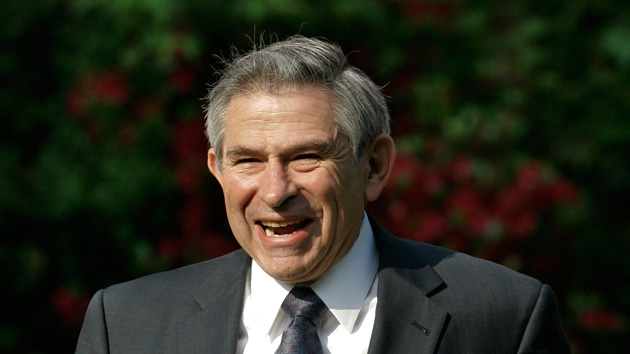 Last week, Jeb Bush, the all-but-announced GOP presidential candidate, stirred up a fuss when he privately told a group of Manhattan financiers that his top adviser on US-Israeli policy is George W. Bush. Given that Jeb has tried mightily to distance himself from his brother, whose administration used false assertions to launch the still highly unpopular Iraq War, this touting of W.—even at a behind-closed-doors session of Republican donors—seemed odd. But perhaps more noteworthy is that Jeb Bush has embraced much of his brother’s White House foreign policy team. In February, his campaign released a list of 21 foreign policy advisers; 17 of them served in the George W. Bush administration. And one name stood out: Paul Wolfowitz, a top policy architect of the Iraq War—for the prospect of Wolfowitz whispering into Jeb’s ear ought to scare the bejeezus out of anyone who yearns for a rational national security policy.

Wolfowitz, who was deputy defense secretary under George W. Bush, was a prominent neocon cheerleader for the invasion of Iraq. He was also the top conspiracy theorist in the Bush-Cheney crowd. As Michael Isikoff and I reported in our our 2006 book, Hubris: The Inside Story of Spin, Scandal, and the Selling of the Iraq War, Wolfowitz, prior to the Iraq War, was a champion of a bizarre theory promoted by an eccentric academic named Laurie Mylroie: Iraqi dictator Saddam Hussein, not Islamic extremists such as Al Qaeda, was responsible for most of the world’s anti-United States terrorism.

For years, Mylroie, who had been an assistant professor of political science at Harvard University, had promoted the notion that Saddam was the real terrorist threat to the United States, and law enforcement and intelligence officials had dismissed her thesis, which was based on assorted elaborate conspiracies that apparently only she could divine. After the 1993 World Trade Center bombing, she developed a complicated hypothesis that the mastermind of that attack, an Islamic radical who went by the name of Ramzi Yousef and who had spent time in Afghan training camps affiliated with Al Qaeda, was actually an Iraqi intelligence agent who had somehow stolen Yousef’s identity. Actually, according to Mylroie the Iraqi agent had stolen the identity of a deceased Pakistani and then taken on the name Ramzi Yousef.  In any event, this would mean that Saddam, not Islamic extremists, was behind this act of war.

Mylroie made the rounds of the then-small world of counterterrorism studies. FBI investigators, federal prosecutors, and the CIA considered her theory and tossed it aside. She had no compelling evidence. (One CIA analyst noted, “Not only was it not true, we proved the opposite”—that Saddam was not connected to the 1993 bombing.) But Mylroie pressed on, and neocons, who had long been diehard supporters of Israel who yearned to drum up support for US military action against Iraq, flocked to her ideas.

Wolfowitz was one of her fiercest advocates. At one point during the Clinton years, when Wolfowitz was serving as the dean of the Johns Hopkins School of Advanced International Studies, he met with Martin Indyk, who was overseeing Iraq policy for the National Security Council, and asked why the Clinton administration had not accepted Mylroie’s view. Indyk told him that the CIA and FBI had settled this issue. But Wolfowitz was not persuaded. “He was convinced that we were purposely refusing to see the link for policy reasons,” Indyk told Isikoff and me for our book.

Mylroie continued to peddle her conspiracy idea. After the 1995 Oklahoma City bombing, she insisted that Iraq was also behind this event. She sent memos to the lawyers for Timothy McVeigh, who was eventually convicted of mounting this attack, claiming that McVeigh’s co-conspirator, Terry Nichols, had been in league with Ramzi Yousef, the supposed Iraqi agent. As for Al Qaeda’s bombings of two US embassies in Africa in 1998 and its 2000 bombing of the USS Cole off the Yemen coast, Mylroie contended that these attacks were actually the handiwork of Saddam. “Everything, everything, everything was connected to Saddam,” Daniel Pipes, a former Mylroie collaborator, said. “She became monomaniacal on the subject.” At the core of this was a fundamental and important policy implication: the US government needed to worry more about Saddam than radical Islamic fundamentalists.

In 2000, Mylroie published a book on the 1993 World Trade Center bombing called Study of Revenge: Saddam Hussein’s Unfinished War Against America. Wolfowitz had helped her with the manuscript, and in the acknowledgements Mylroie noted that his wife, Clare, had “fundamentally shaped this book.” The book featured a blurb from him:

Laurie Mylroie’s provocative and disturbing book argues powerfully that the shadowy mastermind of the 1993 bombing of New York’s World Trade Center, Ramzi Yousef, was in fact an agent of Iraqi intelligence. If so, what would that tell us about the extent of Saddam Hussein’s ambitions? How would it change our view of Iraq’s continuing efforts to retrain weapons of mass destruction and to acquire new ones? How would it affect our judgments…and the need for a fundamentally new policy? These are questions that urgently need to be answered.

This was quite an endorsement. Wolfowitz, who had been a top Pentagon official for the first President Bush, was a leading member of the Republican defense establishment, and he was giving his seal of approval to what was essentially the Da Vinci Code of terrorism. Other leading neocons praised her work, including former CIA director R. James Woolsey and ex-Pentagon official Richard Perle.

After George W. Bush entered the White House, Wolfowitz, now the No. 2 official in the Defense Department, pushed Mylroie’s theory. At one point before Sept. 11, 2001, he asked the head of the Defense Intelligence Agency to have his analysts review her book. (The analysts did and found nothing to confirm her suppositions.) Wolfowitz also pressed the CIA to reassess its negative evaluation of Mylroie’s theory. Officials who worked with Wolfowitz later noted that he could cite specific pages from Mylroie’s book. To some, he seemed practically obsessed with it.

This had serious consequences. In an April 2001 interagency meeting on terrorism, Richard Clarke, the White House counterterrorism adviser, noted that a US priority ought to be targeting Osama bin Laden and the Al Qaeda leaders in Afghanistan. Yet Wolfowitz, Clarke recounted in his memoir, pooh-poohed this concern with “one man, bin Laden” and said the government should focus on “Iraqi terrorism.”

Not surprisingly, days after 9/11, Mylroie was publicly suggesting that that it was “extremely unlikely” and “next to impossible” that bin Laden had pulled off this assault “unassisted by a state.” She meant Iraq. And her views influenced the Bush-Cheney administration’s immediate reaction to 9/11. The day after the attack, Bush asked Clarke to search for evidence that Saddam was behind the attack. At a Cabinet meeting on Sept. 15, Wolfowitz contended there was a 10 to 50 percent chance that Saddam had helped orchestrate the 9/11 plot, and he proposed attacking Iraq, observing that a war there might be easier than one in Afghanistan. In subsequent memos, Wolfowitz pushed the same point. He also dispatched Woolsey to London to find evidence to prove Mylroie’s theory. (He came back empty-handed.)

Ultimately, Bush did not take Wolfowitz’s advice to start with a war on Iraq. He attacked Afghanistan. But as soon as the Taliban regime in Kabul fell, Bush asked Defense Secretary Donald Rumsfeld to draw up war plans for Iraq. And Wolfowitz never ceased promoting Mylroie’s Saddam-did-it theory. During a March 17, 2002, lunch with the British ambassador, Wolfowitz insisted that Saddam was tied to the first World Trade Center attack. Meanwhile, Mylroie became a television pundit, claiming that the CIA was covering up the Saddam connection to 9/11.

Throughout this period, Wolfowitz was also promoting a similar theory within the administration: that lead 9/11 hijacker Mohamed Atta had met in Prague with an Iraqi intelligence official. CIA and FBI officials had concluded that this, too, did not occur. (After the Iraq invasion, Wolfowitz would order WMD hunters in Iraq to search for evidence of the Atta meeting in Prague; nothing would be found.) And at the Pentagon, Wolfowitz oversaw an effort managed by Doug Feith, the undersecretary of defense for policy, to cherry-pick intelligence to link Iraq to 9/11. (This attempt yielded no proof.) Wolfowitz also was a prime advocate for Ahmed Chalabi, the Iraqi exile leader whose Iraqi National Congress before the war was peddling bad information on Saddam’s supposed weapons of mass destruction.

Wolfowitz’s record in office is littered with profound errors. After General Eric Shinseki, the Army chief of staff, testified before Congress weeks prior to the invasion of Iraq that it would take “several hundred thousand soldiers” to occupy Iraq, Wolfowitz said this estimate was “wildly off the mark.” He discounted the possibility of sectarian violence in Iraq following the invasion, insisted that Iraq’s oil revenues would finance post-war reconstruction, and declared that he was “reasonably certain that they will greet us as liberators.” None of these claims were based on serious Pentagon, State Department, or CIA assessments. And none turned out to be true.

Wolfowitz and all his senior-level colleagues in the Bush-Cheney administration got Iraq wrong. They each were guilty of wishful thinking and arrogantly believed they knew better than area experts in various government agencies. But within this crew, as a ferocious advocate of a wacky and paranoid conspiracy theory, Wolfowitz went further in denying reality. And for that, his judgment ought to be questioned. After all, his passionate embrace of Mylroie’s unproven and screwy thesis caused him to miscalculate one of the most serious threats to the United States. He could have been run out of the public sphere for this. Yet Wolfowitz was awarded the Medal of Freedom by George W. Bush and named president of the World Bank (where he went on to have a scandalous tenure). And now Wolfowitz is advising yet another Bush who may end up in the White House. One can only imagine what dark global conspiracies he’s pitching these days.