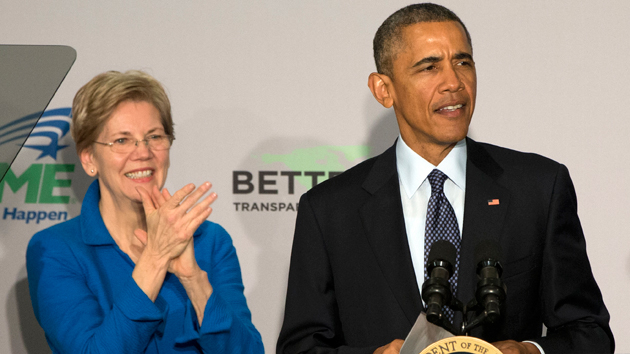 In Washington, as in much of life, it often seems that social evolution doesn’t progress much beyond high school. So it was hardly surprising that in the media the battle over the Trans-Pacific Partnership trade deal was often depicted as a spat between the BMOC of the party (President Barack Obama) and the queen of the alt crowd (Sen. Elizabeth Warren). Yet the vote on Tuesday afternoon in the Senate that blocked fast-track legislation—which would allow the president to bring the TPP to an up-or-down floor vote with no amendments—was a sign that Obama’s problems are not just with Warren, the Massachusetts populist and progressive darling. Every member of his own party but one voted to stymie a vote on the fast-track bill Obama has been pushing. And after the vote, Sen. Chuck Schumer, the New York Democrat who often is mindful of the interests of Manhattan-based financiers, was at the mic denouncing the fast-track measure and demanding a trade deal that does right by American workers—a jab at Obama, who has passionately asserted the TPP is good for US workers.

It turns out that Warren was not holding a marginal position, as the White House had contended. The president was.

In recent days, Obama and his aides unloaded on Warren. In an interview with Yahoo, Obama, when asked about Warren’s opposition to the fast track bill, declared, “She’s absolutely wrong.” Warren has said that she is concerned that the TPP could allow foreign corporations to challenge US regulations and that fast-track legislation could lead to trade agreements in the future that eviscerate protections in the Dodd-Frank Wall Street reform law. But Obama dismissed her objections as merely “hypothetical, speculative.” And then he doubled-down on the dig:

The truth of the matter is that Elizabeth is, you know, a politician like everybody else. And you know, she’s got a voice that she wants to get out there. And I understand that. And on most issues, she and I deeply agree. On this one, though, her arguments don’t stand the test of fact and scrutiny.

These were relatively harsh words for a party colleague and ally. And they were in sync with the message that White House officials had been spreading in the preceding days to reporters in Washington: Warren doesn’t know what she’s talking about; she’s just grandstanding.

From the Warren perspective, Obama and the White House had become captive of the Rubin wing of the party—named after Robert Rubin, the former Goldman Sachs honcho who became Treasury secretary in the Clinton administration and went on to help lead Citigroup. To the dismay of Warren’s backers, Obama was not engaging with her criticisms; he was deriding them.

Despite what Obama officials were saying, there are real policy issues at the heart of this debate. One is transparency: The TPP draft under construction is confidential, and Obama was asking lawmakers to support the fast-track bill before the public knew what was in the deal. As Warren said in a recent interview, “The president has committed only to letting the public see this deal after Congress votes to authorize fast-track. At that point it will be impossible for us to amend the agreement or to block any part of it without tanking the whole TPP. The TPP is basically done. If the president is so confident it’s a good deal, he should declassify the text and let people see it before asking Congress to tie its hands on fixing it.” And in a recent speech she explained how fast track can be exploited to undercut Wall Street reform: “A Republican President could easily use a future trade deal to override our domestic financial rules.  And this is hardly a hypothetical possibility: We are already deep into negotiations with the European Union on a trade agreement and big banks on both sides of the Atlantic are gearing up to use that agreement to water down financial regulations. A six-year fast-track bill is the missing link they need to make that happen.”

There are plenty of other policy details Warren has cited to support her opposition to the TPP and the fast-track bill. This is rather complicated stuff. Yet the White House tried to cast this as a political fight driven by Warren’s desire to remain the favorite of progressive Democrats.

Perhaps the White House fell into a trap and focused too much on Warren. Harry Reid, the Democratic leader in the Senate, was just as adamant in his opposition, declaring that he would block the fast track bill unless it contained provisions aimed at currency manipulation by China. (Labor unions have been demanding that trade deals confront this matter because currency manipulation allows China to export cheap goods and inflate the price of imported goods manufactured by American workers.) But TPP advocates have feared that a currency manipulation provision could sink the whole deal. Democrats, though, rallied behind Reid on this matter.

The outcome of the vote was “shocking,” Senate Majority Leader Mitch McConnell observed afterward. And it was. Even pro-trade Democratic senators sided with Reid.

The TPP and fast track are not dead. The White House called the vote merely a “procedural snafu.” But Obama and his aides did seem to miscalculate. His strategy of trying to make Warren the odd woman out failed—at least in this round. There were too many members of his own party questioning the TPP on assorted policy grounds, with many Democrats reviving the traditional concerns about trade deals: Environmental protections are weak; labor rights are not sufficiently bolstered; and cheaper imports lead to more job lost than more exports will create. Ultimately, Obama did not convince his closest allies. Instead, he went after Warren. He ended up marginalizing himself.