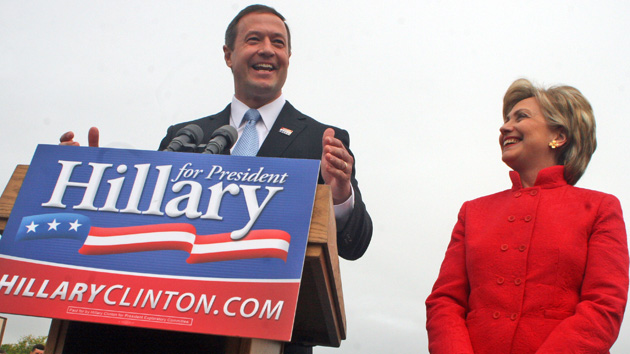 One Democratic source tells me that Hillary Clinton’s camp has sent a clear message to former Gov. Martin O’Malley (D-Md.): Challenge her for the Democratic presidential nomination and you’re dead to us. Another source says that the Clinton crew has sent a different clear message to O’Malley: Feel free to take her on in the primaries; she could use the competition. I don’t know which source is correct. Perhaps both are, for Hillaryland may well be populated by advisers and strategists with different takes on this question. But it does seem clear that Clinton, who finally jumped into the 2016 race with a tweet and video splash on Sunday, could benefit if she is challenged in her party’s primaries by O’Malley or someone else.

There’s about nine months to come before the first voting occurs in the Iowa caucuses—and 19 months until the general election. That’s a long time. Clinton, who is hardly a fresh face, will find it tough not to appear stale to some voters during that stretch. She is already at a super-saturation level of media coverage. There are endless tweets, blog posts, and articles about every aspect of her campaign. All her moves—her logo!—receive inordinate press attention. Though she and her aides insist this race is not about her—it’s about everyday Americans and how to improve their lot—the campaign is likely to be much ado about Clinton: how she campaigns, what she says, what’s her vision, where she goes, how she’s performing, what’s her strategy, what’s up with her husband, her connection with voters, her trustworthiness, her likability, and so on. Her every utterance and move will be dissected everywhere—again and again. (And the various dissections will be dissected.) On the Republican side, all the 2016 wannabes will be directing attention at her, as they each angle to be seen as the candidate best able to obliterate Clinton. Sure, the GOPers will eventually form a circular firing squad—they won’t be able to resist the urge to attack one another—but they will direct many shots at Clinton. The around-the-clock Hillary Bashathon will never end.

It would be tough for any candidate to withstand this degree of hyperscrutiny for such an extended period. Might voters become bored with Clinton, through no fault of her own, before any voting starts? Might her message, whatever its merits, seem tired and worn out by then? If the Democratic half of the 2016 primary story is only about Clinton going through elections and caucuses with preordained results and being compared solely to herself, that will likely not engage undecided voters. What’s exciting or interesting about a cakewalk and no substantial debates over political qualifications and important policy matters?

Clinton needs a foil in the Democratic primaries—someone she can joust with, someone who will expand the narrative, and someone she can beat. Waltzing through one election after another will not boost her commander-in-chief credentials. A fight or, at least, a tussle—even a lopsided one—will give her campaign more of a story to tell, and, presuming she wins the primaries, will position her as, well, a winner, not a candidate who is skating toward the general election on the easy ice of entitlement and inevitability. Barack Obama’s ability to dispatch Clinton in 2008 demonstrated his moxie and his mettle. His glow intensified with each victory. Everyone likes a winner, right? And these battles were great training for the match-up to come against Republican John McCain. Clinton will not face as formidable a primary foe as Obama did. But a face-off against any opponent of consequence is better than a breezy promenade toward the main event.

O’Malley, who’s considering a presidential bid, would make a good sparring partner. He’s a smart guy with sass, but he’s not a slasher who could inflict long-lasting political damage. In fact, the clichéd conventional wisdom about tough primary contests pulling candidates too far toward an ideological extreme and hurting nominees in the general election may not hold true. In 2012, Mitt Romney did veer far to the right to capture the Republican nomination, and McCain also sucked up to conservatives in 2008—and both men were harshly assailed by their party rivals during the nomination phase—but each still had a fighting chance in the general election that came next. Both were undone by errors made in the postprimary period rather than decisions and dustups of the primaries. General election voters have short memories—or don’t bother to pay a lot of attention to the nomination battles. If O’Malley manages to score some points against Clinton, they would probably matter little after the convention.

Clinton’s rival need not be O’Malley. But the choices for this spot are limited. James Webb? Lincoln Chaffee? Bernie Sanders (who’s not a Democrat)? It may be tougher for any of them to engage her in a serious fight. O’Malley, too, is not likely to threaten her path toward that glass ceiling. But at the moment he seems the possible contender with the most oomph.

A primary battle—even a limited one—introduces risk into the equation. It’s not hard to imagine Clinton and her strategists yearning for less uncertainty than more. (What if O’Malleymentum takes off?) And the Clintonites may not have a say in whether O’Malley enters the ring. Yet a primary fight that makes Clinton earn—not inherit—the nomination would cast her in a different role. She’d be a fighter, not a dynastic queen. The press and the public would have something to ponder beyond just Clinton herself. And all politics are relative; candidates usually look better when compared to another candidate rather than to a nonexistent ideal or even themselves. So perhaps Team Hillary should welcome the upstart Marylander into the contest. A slam dunk is more impressive when waged against a competitor, and even the Harlem Globetrotters needed the Washington Generals.