Rhett Krawitt is seven years old. He is also a cancer survivor. After spending most of his young life battling leukemia, he is now taking up a new cause: fighting for mandatory vaccines.

For close to four years, while he underwent chemotherapy, Rhett couldn’t be vaccinated against dangerous and contagious diseases like measles and whooping cough. He had to rely on others around him for protection: As long they were vaccinated, transmissions were unlikely. But as a student in Marin County, California, an area where many parents file personal belief exemptions enabling their kids to opt out of required vaccines, Rhett was at risk.

In recent years, the number of parents who use nonmedical vaccine exemptions has been on the rise, contributing to record numbers of vaccine-preventable outbreaks. After the Disneyland measles outbreak, which accounts for most of the 150 new measles cases reported across 17 states since the beginning of the year, Rhett and his family began calling on legislators to put limits on vaccine exemptions—and they weren’t alone. 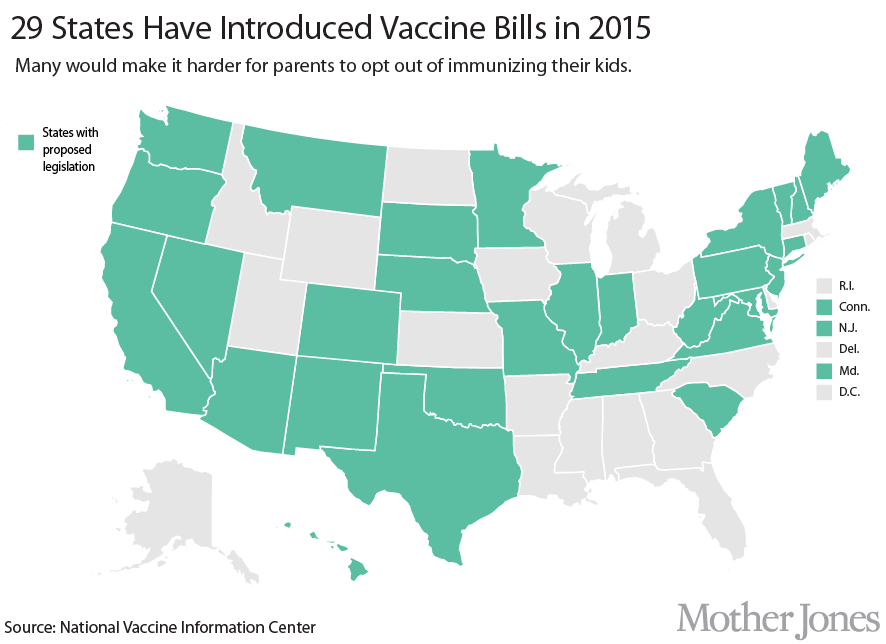 Last Wednesday, in conjunction with advocacy organization MoveOn.org, Rhett helped deliver a petition, along with 21,000 signatures, calling on California legislators to support a new bill that would put an end to nonmedical vaccine exemptions and inform parents about immunization rates in California’s schools.

California has been hit the hardest in the recent outbreak, but it’s not the only state now seeking to curb vaccine exemptions. Nine other states—including Oregon, a state with one of the highest percentages of parents who file exemptions—have proposed legislation that would eliminate either personal belief exemptions or religious belief exemptions.

Other states have introduced vaccine bills that would make exemptions harder to obtain or increase the ability of health officials to track where vaccination gaps exist. Overall, since the beginning of this year, 79 vaccine bills have been introduced in 29 states.

Not everyone is happy about it. The National Vaccine Information Center (NVIC), which describes itself as the “oldest and largest consumer led organization advocating for the institution of vaccine safety and informed consent protections,” and issues online action alerts about legislation that would make it harder to opt out of vaccines—and instructs members on how to fight against it.

Vaccine advocates, however emphasize that the new bills are vital to public health. “This is not a matter of private health, like home birth or vitamin choices a family makes in their own home,” MoveOn member Hannah Henry, a mother of four, wrote in a statement included with the California petition. “It is not about politics; it is about children’s lives.”