CRUZ: I just came back from New Hampshire where there’s snow and ice everywhere. And my view actually is simple. Debates on this should follow science and should follow data. And many of the alarmists on global warming, they’ve got a problem because the science doesn’t back them up. And in particular, satellite data demonstrate for the last 17 years there’s been zero warming, none whatsoever. It’s why, you remember how it used to be called global warming, and then magically the theory changed to climate change?

CRUZ: The reason is it wasn’t warming. But the computer models still say it is, except the satellites show it’s not.

We totally agree with his point that debates about climate “should follow science and should follow data.” Right on! But according to Kevin Trenberth, a leading climate scientist at the National Center for Atmospheric Research, everything else in Cruz’s quote is “a load of claptrap…absolute bunk.”

Trenberth wasn’t alone in his criticism. Several prominent climate scientists contacted by Climate Desk dismissed Cruz’s analysis. “It is disturbing that some of our most prominent elected officials have decided to engage in distortions of and cynical attacks against the science,” said Michael Mann of Penn State.

“Lawmakers have a responsibility to understand the science, and not to embrace ignorance with open arms, as Senator Cruz is doing here,” added Ben Santer, a researcher at the Lawrence Livermore National Lab.

So what’s wrong with what Cruz said? For starters, the satellite record does, in fact, show warming. Here’s a view of temperature anomalies (that is, the deviation from the long-term average) reported by Remote Sensing Systems, a NASA-backed private satellite lab. It shows warming of about 0.2 degrees Fahrenheit per decade since 1980, the beginning of the satellite record: 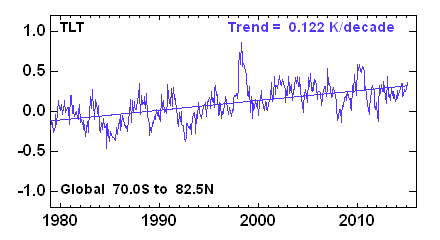 Even still, there are a couple important caveats with satellite temperature data that Cruz would do well to make note of. One, Santer said, is that it has a “huge” degree of uncertainty (compared to land-based thermometers), so it should be approached with caution. That’s because satellites don’t make direct measurements of temperature but instead pick up microwaves from oxygen molecules in the atmosphere that vary with temperature. Fluctuations in a satellite’s orbit and altitude and calibrations to its microwave-sensing equipment can all drastically affect its temperature readings.

More importantly, satellites measure temperatures in the atmosphere, high above the surface. The chart above shows the lower troposphere, about six miles above the surface. This data is an important piece of the climate and weather system, but it’s only one piece. There are plenty of other signs that are far less equivocal, and perhaps even more relevant to those of us who live on the Earth’s surface: Land and ocean surface temperatures are increasing, sea ice is declining, glaciers are shrinking, oceans are rising, the list goes on. In other words, the satellites-vs-computers dichotomy described by Cruz ignores most of the full picture.

For example, here’s the most recent land and ocean-surface temperature data from the National Oceanic and Atmospheric Administration, showing how temperatures this winter deviated from the long-term average (dating all the way back to 1880). Much of the globe is warmer than average, some parts are the hottest on record, and the overall global temperature was the warmest on record: 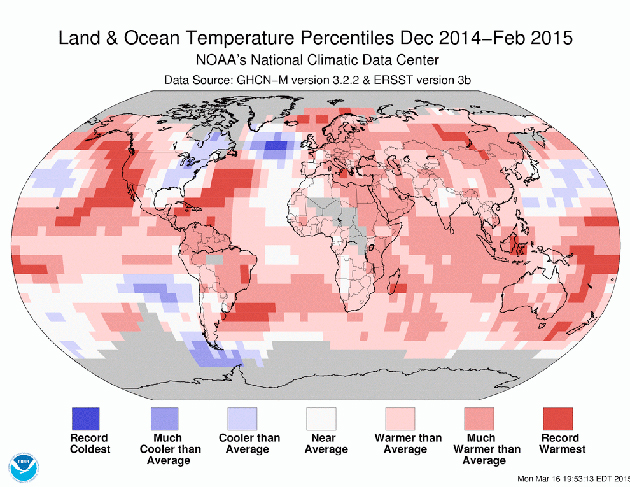 There’s also a big underlying flaw with Cruz’s cherry-picked timespan of 17 years, which almost any climate scientist would agree is far too short to observe any meaningful trend. 1998, the year Cruz starts with, was itself exceptionally warm thanks to the biggest El Nino event of the 20th century. If that’s your starting place, the warming trend does indeed look weak. But look over a longer time period, and it’s obvious that very warm years are more common now than before.

And in any case, even the modest “slow-down” in warming that has occurred since 2000 isn’t inconsistent with what scientists have always expected man-made climate change will look like. Even the earliest climate models predicted the possibility of occasional leveling-off periods in upward-bound global temperature, like a landing on a staircase.

In fact, one reason why many scientists “magically” (as Cruz put it) have begun to prefer the term “climate change” to “global warming” is because they think the latter can misleadingly imply that every year will be incrementally warmer than the last. In reality, climate change is all about odds: Man-made greenhouse gas emissions substantially increase the chances of an exceptionally warm year, but they don’t eliminate the possibility for average or even cold years to happen.

Even accounting for the apparent stability of the last few years, Santer said, “everything tells us that what’s going on isn’t natural.”

As for Cruz’s reference to snowy weather in New Hampshire…give us a break.