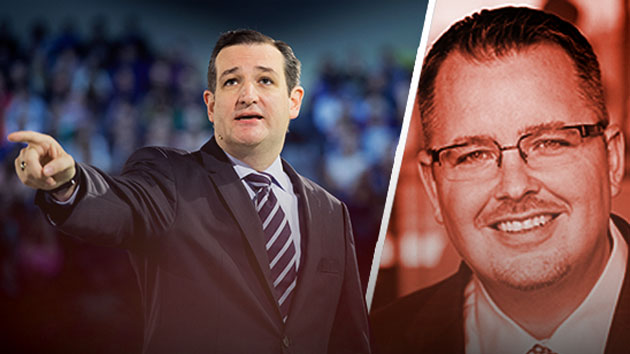 It was no surprise on Monday when Sen. Ted Cruz (R-Texas) formally announced his presidential bid. By last summer, he was making key hires for his campaign crew. And this included recruiting a controversial Missouri-based political operative named Jeff Roe, who is known for his ruthless, bare-knuckled style and who has recently been in the news due to a tragic death.

Following the apparent suicide last month of Missouri state auditor Tom Schweich, who was a Republican gubernatorial candidate, Republican legislators and party elders in the state denounced the toxic culture within the state GOP and pointed to it as a cause of Schweich’s death. And some cited Roe as a prime purveyor of the political hardball and scorched-earth tactics that have transformed many Missouri elections into mud-drenched campaigns of personal destruction. There’s no evidence linking Roe to the anti-Semitic “whisper campaign” that seems to have deeply troubled Schweich in the days prior to his death. But Roe’s merciless style has been legend in Missouri for over a decade. And now he is poised to practice his brand of political blood sport against Cruz’s 2016 rivals.

Roe, who’s been dubbed the “Karl Rove of Missouri,” got his start in politics in 1994, working for Sam Graves, then a GOP state representative from northwestern Missouri running for state Senate. With Roe’s help, Graves won that race. Six years later, in 2000, Roe masterminded Graves’ successful campaign for Congress.

Roe went on to helm several of Graves’ reelection campaigns, and he became notorious for his aggressive tactics. Graves’ campaigns deployed trackers to monitor his opponents, and it frequently seemed that these staffers were trying to unnerve and intimidate their quarry, sometimes holding their cameras directly in the candidates’ faces as they spoke. Graves’ opponents in these campaigns have described their encounters with Graves’ staffers as “close to assault” and “evil.” Graves’ 2002 challenger, a Democrat named Cathy Rinehart, says she filed a police report after a group of Graves’ campaign aides “accosted” her during a parade. (No charges came from her report.) “It was intimidation; it was very threatening,” Rinehart, the Clay County assessor, recalls. “They did it the whole campaign.” One Graves staffer would drop by the assessor’s office almost daily, she remembers, to make sure she was there working. The level of “nastiness” and “intimidation” during the campaign was “very, very, very bad,” she says. And she faults Roe for the tone of the campaign.

“I don’t think Jeff has changed his tactics at all,” Rinehart adds. “He just thinks it’s funny, and it’s not funny.”

Roe did not respond to a request for comment, nor did Graves’ office.

Graves’ 2004 opponent, Democrat Charlie Broomfield, says he filed a police report after an encounter in a dark parking lot with a camera-wielding man who turned out to be a political operative for Graves. Broomfield was afraid as the man, who refused to identify himself, got in his face and began snapping his picture. Broomfield wrote down the man’s license plate number, which police traced to Graves’ deputy press secretary. “I think it was fairly close to assault, if not actually assault,” Broomfield told a local paper, the Pitch, for a 2004 story on Graves’ political operation. The article was dubbed “Goon Squad.”

In 2005, after serving as Graves’ chief of staff during his first two terms in Congress, Roe opened his own political-consulting shop, Axiom Strategies. He continued to work closely with Graves. In the 2006 election, Graves’ Democratic challenger was 62-year-old Sara Jo Shettles, who once held a job selling ads for a science magazine owned by the parent company of Penthouse. The Graves camp accused her of having a “Pornographic Connection,” and ran a TV ad that displayed a large “XXX” beside her picture, as an announcer warned that she had “outrageous values.” Roe defended the attack. “Politics ain’t beanbag,” he told the Kansas City Star after the election, quoting an old aphorism.

Two years later, in 2008, Roe went after Susan Montee, a Democrat who had run a winning campaign for state auditor against Axiom client Sandra Thomas. A political blog Roe operated called The Source accused Montee of “committing voter fraud.” Roe’s blog claimed that Montee had voted using an absentee ballot sent to a home that her ex-husband had won in their divorce settlement. “The Source calls on the Buchanan County Clerk to invalidate Susan Montee’s current absentee ballot until her residency is confirmed,” the post read.

In November 2008, less than a month after the blog post appeared, Edward Greim, an attorney at a firm with close ties to Roe (and headed by Graves’ brother, Todd), sued the local county clerk to have Montee’s ballot thrown out. The real purpose of this lawsuit, Montee claims, was to dig up personal information that could be used against her in a future election. “Under the auspices of that lawsuit, [they] subpoenaed me and wanted all of my records on my divorce, my property settlements,” she recalls. According to court documents, Greim tried to obtain her personal diary and calendar, bank and credit card statements, and records or her political contributions. Greim also sought all recent communications between Montee and her ex. A judge ultimately dismissed the suit.

Axiom brags of Roe’s “well-deserved reputation for being ruthless” and notes that his “controversial campaign tactics are the stuff of political legend.”

Roe didn’t only target Democrats. During a 2006 state Senate race, he dug up a painful episode from the past of Joe Brazil, a fellow Republican running against Roe’s preferred candidate. In 1982, Brazil was spreading sand around the parking lot of his suburban St. Louis high school as part of a senior prank when his friend fell from atop the dump truck Brazil was driving and was crushed beneath it. Brazil has described his friend’s death as “the most painful thing that ever happened in my life.”

Roe’s blog, The Source, recounted the story of this tragedy—but also claimed that Brazil had consumed “quite a few beers” the night of the accident and was operating the truck “while drunk.” The post maintained this was “confirmed” and cited an entry on the Darwin Awards website, which posts tales of people who have died “in an obviously stupid way.” The Darwin Awards post also claimed the driver of the dump truck was drunk. Brazil denies drinking that night and the police report at the time indicates he was sober. He was never charged with a crime.

Brazil lost the election, taking only one-third of the vote. Afterward, Roe defended the Brazil blog post to the Kansas City Star, saying, “If they don’t like it, then they don’t like the truth.” In March 2007, Brazil sued Roe for defamation. A state appeals court judge later threw out the case for lacking “substantial evidence” of malice, even though Brazil’s lawyer had turned up evidence suggesting Roe knew his blog’s version of events might not be accurate. What Roe did to him “should be illegal,” Brazil says.

Years later, Brazil still detests Roe. “Jeff Roe is a disgusting human being,” he says. “He leaves a path of destruction.”

Yet in the aftermath of nasty elections, Roe’s candidates often won. And he has embraced his bad-boy reputation. An Axiom promotional video brags of Roe’s “well-deserved reputation for being ruthless” and notes that his “controversial campaign tactics are the stuff of political legend.” As his reputation grew, Roe moved from working on local races to presidential campaigns, advising former Arkansas Gov. Mike Huckabee’s presidential effort in 2008 and Texas Gov. Rick Perry’s in 2012. Now he’s working for Cruz—and that might turn what can be expected to be a fierce primary season into an even nastier brawl.