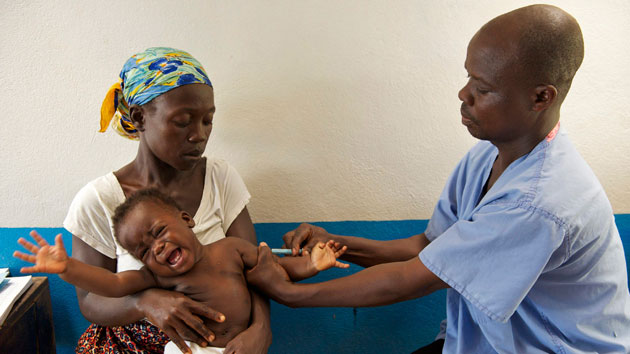 A health care worker in Liberia vaccinates a young child in 2003. Shehzad Noorani/AP

Since the first case was detected last March, Ebola has claimed the lives of over 10,000 people in Liberia, Sierra Leone, and Guinea. The total death toll just surpassed 10,000, as of Thursday. But the deadliest and costliest outbreak since the virus was discovered in 1976 finally abated this month, with Liberia’s final patient leaving treatment last week. The bad news, though, is not over. The epidemic and the destruction it wreaked on West Africa’s fragile healthcare system could result in a new and deadly public health crisis: thousands of additional deaths from measles because of the lack of vaccinations. So says a new study released on Thursday in Science by a team of researchers—experts in epidemiology and public health—from Johns Hopkins, Princeton University, and four other institutions.

“Measles is highly transmissible, so it is one of the first diseases to circulate when vaccination is reduced due to healthcare disruptions,” Justin Lessler, one of the authors and a professor of epidemiology at Johns Hopkins, observes.

If measles strikes Liberia, Guinea, or Sierra Leone in the coming months, the infection rate would be likely almost double than before the Ebola outbreak, these researchers say. That means potentially as many as 16,000 deaths from measles infections and 227,000 total infections. An additional 20,000 young children—from nine months to five year olds—would be infected for every month that West African healthcare systems continue at their current and decreased rate of functioning. If the healthcare systems are not revitalized, almost half of the children in this region would go unvaccinated, compared to only 4 percent who were unvaccinated before the Ebola outbreak. Side effects in nonfatal measles infections include blindness, deafness, and brain damage.

The researchers are urging the World Health Organization, the local ministries of health, and other health organizations that conduct vaccination campaigns to act quickly.

Vaccinations plummeted in West Africa during the Ebola outbreak because health care facilities shut down, and people stayed away from remaining open clinics out of fear of being contaminated. In Monrovia, Liberia, at least half of the health care centers closed. A report from Sierra Leone noted that the admission rate at open clinics dropped 70 percent during the outbreak. Physicians from other countries were viewed with suspicion; some West Africans believed Westerners had brought the disease with them. “The Ebola crises has made an already complex relationship between the public health community and locals only more so,” says Lessler.

The World Health Organization and the Measles and Rubella Initiative is currently advising that vaccination campaigns be postponed in areas affected by Ebola until 42 days following the determination an area is free of Ebola. The new study suggests that a measles epidemic can be prevented now in regions where the Ebola crisis has passed. The WHO is advising a catch-up campaign: a large number of vaccinations will need to be administered to all the infants and children who went unvaccinated during the crisis.

Each vaccine costs only $1 dollar to purchase and deliver. A recent report by Good Governance Africa, a research and advocacy organization based out of Johannesburg, South Africa, noted that 16 African countries have near 100 percent vaccination rates and have decreased the number of measles related deaths by the thousands. More than 90 percent of children in Liberia, Guinea, and Sierra Leone had been vaccinated before the Ebola epidemic struck.

“The high mortality rate that has been seen from measles in previous humanitarian crises is particularly concerning,” Lessler says, noting that mass measles outbreaks often follow disasters. He points to measles epidemics in Syria during the civil war in 2013, in Ethiopia following deadly famine in in 2000, in the Democratic Republic of Congo during unrest between 2010 and 2013, and in Nigeria now in areas hit by Boko Haram.

“While the downstream effects of Ebola are many, we can actually do something about measles relatively cheaply and easily, saving many lives by restarting derailed vaccination campaigns,” Lessler says.

The Bill and Melinda Gates Foundation, the Department of Homeland Security, and the National Institutes of Health funded the study.