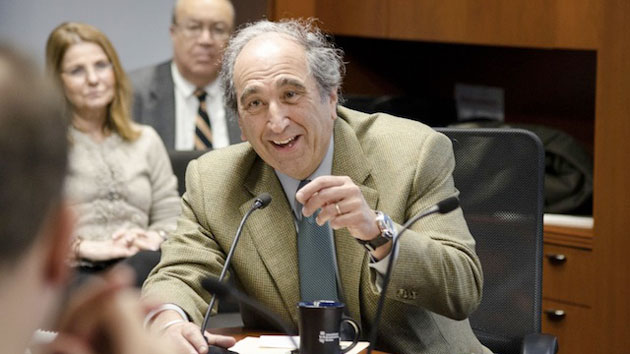 On January 21, Andrew Lack, the media titan who at different times has headed Bloomberg, Sony, and NBC News, was sworn in as CEO of the Broadcasting Board of Governors, the troubled federal agency that oversees the five official US government-supported broadcasters, including the Voice of America. But, according to watchdog website BBG Watch and the entertainment trade magazine Variety, Lack will be leaving the struggling agency after only 42 days on the job. He is reportedly in negotiations to return to NBC, spurred by the network’s own recent challenges, including the suspension of Nightly News anchor Brian Williams. BBG chairman Jeff Shell will fly to Washington on Wednesday to discuss Lack’s departure with employees, says BBG Watch.

As I reported last month, the BBG has suffered heavy criticism from former employees, government officials, and oversight agencies alike:

In 2013, then-Secretary of State Hillary Clinton, testified before Congress that the BBG was “practically defunct in terms of its capacity to be able to tell its message around the world.” That year, the State Department Inspector General, charged with evaluating the BBG, interviewed board members, senior staffers, and outside observers, subsequently reporting that “the word most commonly used to describe the BBG was ‘dysfunctional.'” The agency’s “record of poor management of taxpayer-funded resources—financial, physical, and human—has undermined the confidence that Congress and the American public have in these efforts,” Dan Robinson, a former Voice of America Chief White House correspondent, wrote in an op-ed last March.

Lack, chosen after a year of deliberations at the BBG, was seen as the person with the media experience and visibility who could rejuvenate the organization and lead it out of its troubled state. He told Mother Jones in February, “I am lucky to join a great group of journalists and news professionals spread across the globe who care so deeply about our critical role in [the]…global war on information.”

Former employees, like Ted Lipien, who once worked at the Voice of America and has been an outspoken critic since he left and started BBG Watch, lauded Lack’s appointment. “There were high hopes attached to Andy Lack,” said Lipien, who told me that he met Lack just weeks ago at a BBG board meeting. He said Lack was “very engaging…talking about his plans,” giving no indication that he was anything but committed to his new job.

The news does not bode well for the terrible morale at the BBG: One employee told BBG Watch that hearing the news was “like a bomb had dropped.” Without a CEO, the BBG will continue to suffer from a lack of desperately needed leadership, giving critics an opening to pass legislation that has already been crafted. This includes a bipartisan bill proposed by Reps. Eliot Engel (D-N.Y.) and Ed Royce (R-Calif.) that would alter the entire structure of the BBG, turning the Voice of America into more of an explicit propaganda arm for US policy.

The BBG confirmed Andrew Lack’s departure on Wednesday. “The agency will now begin work to attract an equally talented executive to help continue to transform our agency,” a spokeswoman for the BBG tells Mother Jones. André Mendes, the BBG’s director of global operations, will serve as interim CEO.*

“We all hoped that with his journalistic and managerial experience, Mr. Lack would be able to reform the BBG,” Lipien told me. “His sudden departure is deeply disappointing.”

Update: This article has been updated to include comments from the BBG.