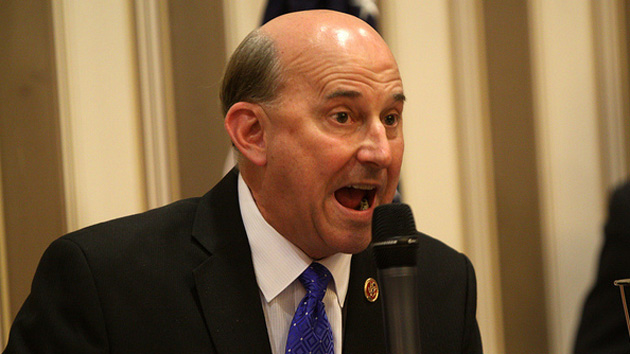 On Sunday, Rep. Louie Gohmert (R-Texas) released a statement announcing his intention to challenge Rep. John Boehner (R-Ohio) for the speaker’s gavel. The five-term congressman from northeastern Texas says he was “urged” by colleagues and friends, who were fed up with the insufficiently conservative leadership of Boehner, to seek the position.

It’s highly unlikely that Gohmert will unseat Boehner as speaker. Still, it’s worth asking, if only to get a glimpse inside the mind of a powerful Republican leader: What could we expect from a Speaker Gohmert? To get an idea, here are some notable policy highlights and political proclamations from his illustrious career. There are many:

1. America is being infiltrated by “terror babies.”
In 2010, Gohmert argued that Muslim terrorists were sending pregnant women to the United States to give birth to babies who “could be raised and coddled as future terrorists” to “help destroy our way of life.” CNN’s Anderson Cooper asked him for evidence, of which there was none, and Gohmert melted down on-air.

2. Obama is like Hitler.
Gohmert often invokes Hitler and Nazi Germany when talking about President Barack Obama and the federal government. On the House floor in 2010, he read from a column by conservative academic Thomas Sowell that compared Obama’s rise to Hitler’s:

3. Raise taxes on the poor.
In January 2014, Gohmert argued that in order to restore fairness, the poorest Americans should pay more taxes:

4. Only guns can save America from Shariah law.
Gohmert is convinced that there are elements in the US government—such as former Hilary Clinton aide Huma Abedin—who want to implement Shariah law. On a radio show in 2013, he claimed, “We’ve got some people that think Shariah law should be the law of the land—forget the Constitution. But the guns are there, that Second Amendment is there, to make sure all of the rest of the amendments are followed.”

5. Child migrants are lying invaders.
Gohmert had a field day with the surge of children who flocked to the border in 2014 to seek refuge from the widely publicized gang violence in countries like Honduras and Nicaragua. After comparing their migration to the D-Day invasion, Gohmert insisted that the children were being coached to lie and falsely say that gang violence was causing them to flee their homes. He then suggested that Texas invoke a state constitution article to mobilize troops and ships for war.

6. He’s open to Sandy Hook conspiracy theories.
While guest-hosting a radio show this summer, Gohmert took a call from a Sandy Hook truther asking Gohmert to watch a video arguing that the mass shooting was a hoax intended to advance gun control. “I’m always learning new things and appreciate the input,” he said. “Thanks for that thought and I will check out Sofia Smallstorm’s video and find out what it is that is so compelling.” (No word yet if he’s found it.)

7. Eric Holder’s Department of Justice cooperated with radical Islamists.
Former Attorney General Eric Holder was probably Gohmert’s Public Enemy No. 2. In a heated congressional hearing in 2014, Gohmert accused Holder of casting “aspersions on my asparagus.” But he also accused Holder of failing to prevent the Boston Marathon bombings due to the Justice Department’s alleged sympathy toward Islamists:

“Rather than investigate [radical Islam], they partnered with them. They had community outreach programs with them. They still have those programs. They have been responsive to CAIR’s [Council on American-Islamic Relations] and ISNA’s [Islamic Society of North America] demands. Federal courts have found that those two organizations are fronts for the Muslim Brotherhood and radical Islam.”

8. You can’t have gun control because of gay marriage.
In a 2013 conference call with Rick Scarborough, a pastor who called AIDS God’s “judgment” for homosexuality, Gohmert cleverly connected the dots between gun control and gay marriage. His case:

Well, once you make it 10 [magazines], then why would you draw the line at 10? What’s wrong with nine? Or 11? And the problem is once you draw that limit, it’s kind of like marriage when you say it’s not a man and a woman any more, then why not have three men and one woman, or four women and one man, or why not somebody has a love for an animal?

There is no clear place to draw the line once you eliminate the traditional marriage and it’s the same once you start putting limits on what guns can be used, then it’s just really easy to have laws that make them all illegal.

9. Gay soldiers will give each other massages all day if allowed to serve openly.
In Gohmert’s view, the Obama administration fundamentally hates the military. In October 2014, he appeared on a radio show to explain why the demise of Don’t Ask, Don’t Tell will lead to massages. “If you’re sitting around getting massages all day ready to go into a big, planned battle, then you’re not going to last very long,” he said. “It’s guerrilla fighting. You are going to be ultimately vulnerable to terrorism and if that’s what you start doing in the military like the Greeks did.”

10. Islam is evil.
Gohmert makes no secret of his disdain for the Muslim faith. In November, he said that the first observance of Friday Muslim prayers at the National Cathedral in Washington was timed by terrorists to mark the 100th anniversary of an obscure Ottoman-era fatwa. “Islam is evil,” he said. “We must shout this out so loud that even President Obama and all the other cowards in politics all over the West will hear it.”

11. LGBT activists are fascists, possibly Nazis.
Gohmert often advances the right-wing trope that liberals, in the name of tolerance, are themselves the intolerant ones. On the House floor in May 2014, he said, “People that stand up and say, you know, I agree with the majority of Americans, I agree with Moses and Jesus that marriage is [between] a man and woman, now all of a sudden we’re considered haters, hatemongers, evil, which really is exactly what we’ve seen throughout our history as going back to the days of the Nazi takeover in Europe.”

12. Saddam had nukes, but he gave them to Syria.
In 2013, speaking on the civil war in Syria, Gohmert issued this clunker: “Yes, we knew that Saddam Hussein had weapons of mass destruction…There was talk about nuclear arms, but we knew he had those and now we know Syria has them.”

13. Ebola is part of the Democrats’ “War on Women.”
Speaking with Glenn Beck last year, Gohmert claimed that the head of the Centers for Disease Control and Prevention, Tom Frieden, was “commander of the Democrats’ new war on women nurses” because he threw them “under the bus” in the agency’s response to Ebola.