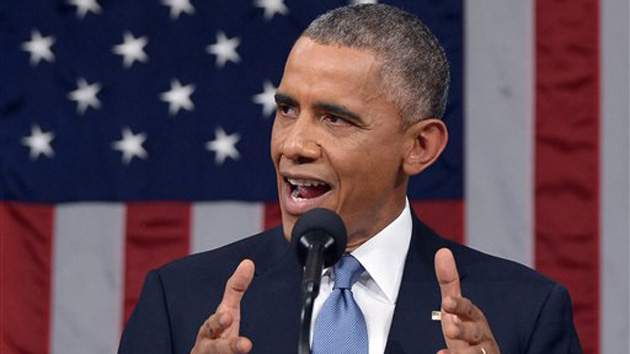 The president is the country’s storyteller in chief. And despite his inspiring powers of oratory (see Campaign 2008) and his savvy understanding of the importance of values in political salesmanship (see Campaign 2012), Obama, as his aides concede, has not effectively sold the nation on his own accomplishments, and, simultaneously, he has failed to establish an overarching public plot line that explains the gridlock in Washington as the result of GOP obstructionists blocking him on important issues where public opinion is in his favor. With his State of the Union speech Tuesday night, Obama had one last chance to take a swing at forging this narrative. Though he did adopt a muscular stance in presenting a forceful and vigorous vision—going on offense in the fourth quarter of his presidency, as his advisers have put it—the president let the Republicans off easy.

Throughout his presidency, as the GOP has consistently sought to block him, Obama has responded inconsistently. He often has pleaded for reason and looked to craft a deal—frequently (and justifiably) to prevent a hit to the economy. (This was the adult-in-the-room strategy.) At times, he has praised House Speaker John Boehner, while pointing to Boehner’s tea party wing as the cause of the partisan paralysis. And then he has occasionally—but not too often—flashed anger and slammed Republicans for being irresponsible and reckless (the debt ceiling scuffle, the assorted government shutdown showdowns). He has not presented a steady and stark tale in which he stars as the fighter for the middle- and lower-income Americans who are stymied repeatedly by always-say-no Republicans aligned with plutocrats, the gun lobby, corporate polluters, and other foes of progress. Consequently, he has often borne blame for the sluggish economy and the mess in Washington, with the Democratic Party paying the price for the dips in his approval rating.

With the folks who effectively deployed an obstruct-and-blame-him strategy now controlling both houses of Congress, Obama cannot mold the debate in a manner that will allow him to achieve transformative policy results requiring legislative approval. There have been glimmers of bipartisanship in recent weeks, but the political basics of the big stuff (immigration, the budget, Obamacare, taxes, climate change, the debt ceiling) are not likely to change. So Obama has decided not to chase the false flag of bipartisan cooperation—not with these guys!—and has mounted a game of capture-the-narrative, but in his modest, let’s-come-together fashion.

The big message of the State of the Union was this: I and my agenda are still here. The key initiative that Obama proposed was tax hikes on the well-heeled—an increase in the capital-gains tax, the end of the so-called trust fund loophole, and a slight tax on the largest financial firms—in order to fund tax breaks for middle- and low-income Americans. Such a measure is an absolute nonstarter for the Republicans. But it was a way to draw a clear line. With the economy picking up speed but still not spreading the gains of the moderate recovery, Obama was tossing out a defining idea: how to fairly address income inequality. And he was trying to find a straightforward device for positioning Republicans on the side of the 1 percenters. This could help set the groundwork for the 2016 campaign of Hillary Clinton (or any other Democrat who ends up with the party’s presidential nomination). And a clash with GOPers over fairness and income equality in this final quarter could shape the overall context in which Obama’s presidency will be judged after he leaves office. (Never underestimate how much a president ponders his legacy.)

In the weeks after the crushing defeat of his party in November’s midterm election, Obama went bold—just as he did following the shellacking of 2010. Four years ago, after Republicans routed Dems in the off-year congressional elections, Obama powered several initiatives—a second stimulus, a nuclear arms treaty, the end of Don’t Ask, Don’t Tell—through Congress right before the tea partyized GOP was to take control of the House. This time, Obama executed an end-run around Congress with a climate deal with China, normalizing relations with Cuba, and executive action to protect millions of undocumented residents from deportation. He demonstrated that there’s nothing irrelevant about him.

In his speech—for which the White House had tried for weeks to lower expectations—a confident and assertive Obama defended his record on national security (Iraq, Afghanistan, Cuba, Iraq, drones, and more) and on the economy. He essentially said, hey, look the economy’s doing much better. He declared this was because his “middle-class economics works”—and certainly are more productive than government shutdowns and fiscal showdowns. He stated, without much fanfare, that he would veto any efforts to undo Obamacare, Wall Street reform, or his executive actions on immigration. (He also said he would veto legislation to impose more sanctions on Iran while he is still trying to negotiate a nuclear deal with Tehran.) But he spent more time outlining what comes next for “middle-class economics”:

That means helping folks afford child care, college, health care, a home, retirement—and my budget will address each of these issues, lowering the taxes of working families and putting thousands of dollars back into their pockets each year.

He proposed a new child care tax cut of up to $3,000. He asked the Republican-controlled Congress to send him a bill giving every American worker at least seven days of sick leave. A minimum-wage hike, gender pay equity, fair compensation for overtime, laws that strengthen unions—the president reiterated his call for these advances. He repeated his proposals for cost-free community college education for all, and “a bipartisan infrastructure plan that could create more than 30 times as many jobs per year.” (He also called for trade deals that are better than previous accords.) He pushed for a “free and open internet” that reaches every classroom and a “reenergized” space program. (Mars, here we come.) And more basic research: “Tonight, I’m launching a new Precision Medicine Initiative to bring us closer to curing diseases like cancer and diabetes.” He called for making voting easier and for rebuilding trust between police and the communities they serve. Obama spoke elegantly about the need for greater action to redress climate change.

This was the same values-driven vision he has been promoting for years: government investments and actions that shape the US economy and society. And to pay for all this, he pointed to the wealthy-favoring tax code: “For far too long, lobbyists have rigged the tax code with loopholes that let some corporations pay nothing while others pay full freight. They’ve riddled it with giveaways the superrich don’t need, denying a break to middle class families who do.” It was wonkish populism.

In other words, Obama acted as if the last election had not occurred—or that, at least, it was not a defining moment. He was demonstrating that the fundamental debate—what is the role of government in setting the future course of the nation?—is far from over.

Obama did not go after the Republicans. He did not depict them as the obstacle that must be hurdled. He did take a poke at them: “At every step, we were told our goals were misguided or too ambitious; that we would crush jobs and explode deficits. Instead, we’ve seen the fastest economic growth in over a decade, our deficits cut by two-thirds, a stock market that has doubled, and health care inflation at its lowest rate in 50 years.” But it was a gentle ribbing. He once more reprised the theme he presented at the 2004 Democratic convention: We can overcome partisan divisiveness. And he urged “a better politics” in which “we appeal to each other’s basic decency instead of our basest fears.” Can that really happen now?

As has been noted ad nauseum, State of the Union speeches aren’t what they used to be. Once upon a time, a large chunk of Americans watched the chief executive unveil his plans in these ornate circumstances. After all, there was little else to see on television for that hour or so. But in our internet days, there are no more captive audiences. So the reach of any State of the Union speech is limited. Yet this address did provide Obama with what is likely to be his biggest audience of the year (unless there is an emergency, a grand history-making event, or national tragedy). And he used the opportunity to effectively restate and reinforce his foundational views. Toward the end of the speech, Obama noted, “I have no more campaigns to run. My only agenda for the next two years is the same as the one I’ve had since the day I swore an oath on the steps of this Capitol.” And that seemed to be true. He yielded no ground to the ascendant Republicans, though he did again sidestep the depth of the opposition he has faced—and that he and his agenda will continue to face. This State of the Union address was no game-changer, but it was a signal from Obama that he will be sticking to his game.