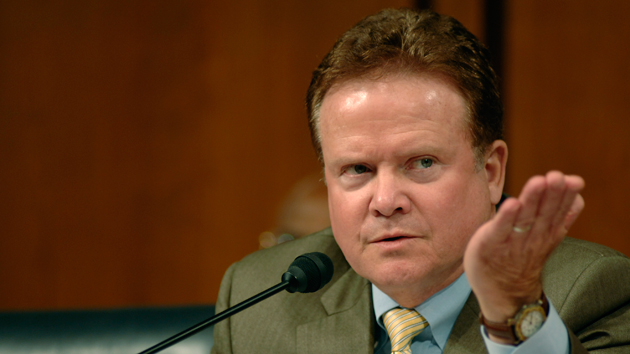 One of the most hyped potential candidates of the 2016 presidential campaign has clashed frequently with his party’s higher-ups. He is known for his outspoken views on the surveillance state, his opposition to overseas entanglements, his warnings about the broken criminal-justice system, his desire to expand the party’s tent to include voters otherwise alienated by identity politics—and for the Confederate-flag-waving supporters who’d follow him anywhere.

Since launching a presidential exploratory committee last month, the former one-term Virginia senator, author, Navy secretary, and Vietnam vet has spent the first weeks of his nascent campaign drawing a contrast with former Secretary of State Hillary Clinton, the party’s most likely nominee. The little-touted candidacy of Webb, who was floated as a running mate during President Barack Obama’s first campaign, is a reminder of how far the ground has shifted since his first run for office nine years ago. Two years after leaving the Senate, Webb’s ideas are finally ascendant—but under a different banner.

It’s easy to forget, but before the rise of Paul, there was a time when conservative civil libertarians were so desperate for leadership in Washington they gravitated toward the Bush-bashing Democrat from Virginia. “I’m leaning towards voting for [libertarian presidential candidate Bob] Barr come November,” Daniel McCarthy wrote for the American Conservative in 2008. “But if Obama picks Virginia Sen. Jim Webb as his running mate, I might have to vote Democratic.” At the time, Jack Hunter, who would lose his job as an aide to Paul after the Washington Free Beacon reported on his neo-Confederate sympathies, called Webb “my favorite Democrat.”

That affection was well founded. Although he was elected amid a wave of anti-Iraq War sentiment, Webb spent much of his time in Washington waging uphill fights on issues that are only now coming into vogue, like prison reform. Driven by his encounters with the prison system as a journalist, Webb spent three years on a lonely crusade to fix incarceration from the federal government on down to states and counties. He zeroed in on the tough-on-crime War on Drugs sentencing guidelines that had filled jails and prisons for decades. Webb’s proposal was comparatively modest: $5 million to create an 18-month congressional task force to study the issue and prepare a set of recommendations. Ultimately, Webb’s prison commission was blocked by a Republican filibuster in 2011.

Had he stuck around Washington a little while longer, Webb might have benefited from a Paul-led shift in how Republicans talk about criminal-justice reform, an issue that’s become so mainstream on the right that New Jersey Gov. Chris Christie and Arkansas Gov. Asa Hutchinson—a former DEA chief—have worked it into their stump speeches. At last year’s Conservative Political Action Conference, even law-and-order Texas Gov. Rick Perry, joined by anti-tax advocate Grover Norquist, urged policymakers to “shut prisons down.” It’s not just Republicans making moves on the issue. Eric Holder spent his final year in office pushing a proposal to reduce sentences for people convicted of drug crimes.

Webb’s views on national security have seen a renaissance on the right, as well. As a senator, Webb was hailed by the American Civil Liberties Union as a heroic George Bailey figure for his opposition to warrantless wiretapping, and he clashed with the White House—first under Bush and then under Obama—over its penchant for making major policy decisions without congressional authorization. “This isn’t the way that our system is supposed to work,” he warned in response to the Obama administration’s 2011 no-fly zone in Libya. On Afghanistan, he questioned Obama’s decision to broker a “long-term economic and security arrangement that far transcends his authority as commander in chief to oversee combat operations against international terrorism.” And in the final fight of his Senate term, he objected to arming Syrian rebels, summing up his view as, “Never get involved in a five-sided argument.”

Webb’s prospective candidacy has been framed in relation to his chief rival. He is “the anti-Hillary” (the Week), “a good anti-Clinton” (FiveThirtyEight), or “Hillary Clinton’s worst nightmare” (The Nation). But maybe that’s not the best comparison. Webb isn’t the anti-Clinton; he’s the Democrats’ Rand Paul—right on down to his radical pitch on changing the composition of the party itself.

In a January interview with Yahoo’s Matt Bai, Webb complained that Democrats have turned working-class white males into a “whipping post for a lot of their policies,” and as an Nth-generation Scots-Irish resident of Southwest Virginia, he believes (his previous election notwithstanding) he’s the man to turn it around. That’s the inverse of what Paul is advocating within his own party, as he seeks to court black voters and members of the Silicon Valley set who have typically backed Democrats.

In some ways, the Webb ’16 push feels like a glimpse into an alternate reality in which hawkish John McCain won in 2008 and sent Democrats, not Republicans, spiraling into an existential crisis about their party’s future. If the Democratic primary doesn’t work out for Webb, there’s always Earth-Two.