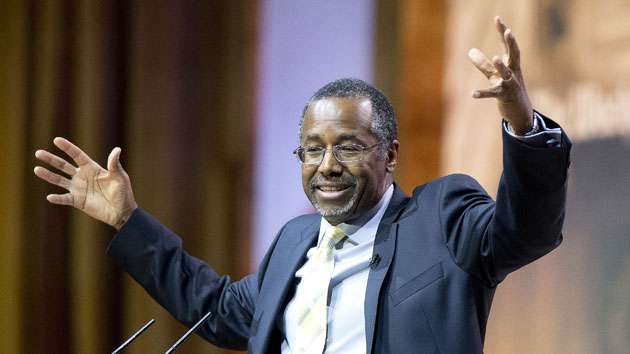 Tea party favorite Ben Carson has said some out-there stuff. The former neurosurgeon, author, and possible Republican presidential candidate once compared women who get abortions to dog-abuser Michael Vick, blamed the decline and fall of the Roman Empire on gay marriage, and concluded that believing in evolution was like thinking that “a hurricane blowing through a junkyard could somehow assemble a fully equipped and flight-ready 747.”

But in his writings and public remarks, he has also voiced views on hot-button issues—immigration, foreign policy, gun control—that place him well outside the tea-party mainstream. He once embraced a universal catastrophic health care plan, and some of his other past positions—gasp!—sound downright liberal. Here are some of the comments that may put him at odds with the conservative GOP base.

Even today we exploit our fellow human beings for work. Is it moral for us, for example, to take advantage of cheap labor from illegal immigrants while denying them citizenship? I’m sure you can tell from the way I phrased the question that I believe we have taken the moral low road on this issue. Some segments of our economy would virtually collapse without these undocumented workers—we all know that—yet we continue to harass and deport many individuals who are simply seeking a better life for themselves and their families. (From his 2012 book, America the Beautiful.)

[J]ust because people control our markets’ financial instruments, they should not be able to personally benefit by manipulating those instruments to their advantage. Many of these people suffer from the same entitlement mentality seen in poor people who are always looking for a government handout. These Wall Street moguls and corporate executives actually think that what they do is worth hundreds of millions of dollars a year, even though in many cases they are simply moving money around, producing nothing. (From his 2014 book, One Nation.)

Elizabeth Warren was right about everything:

The stock market crash of 1929 exacted a severe toll on the people of our nation and our legislators realized, in hindsight, that some of our banking and investment policies had contributed to the crash. Several laws were crafted, including the Glass-Steagall Act, which separated commercial and investment banking activities. Sixty to seventy years later we forgot about many of the horrors of those difficult financial times as well as the reasons why we imposed appropriate regulation on speculative financial activity involving private resources. (From One Nation.)

Whether America’s ensuing steps into war in Afghanistan and Iraq will be seen as positive or negative remains to be seen, but I can’t help thinking there may have been a better way to react that would not have cost us so many lives and financial capital. I believe that if the president had seized the moment and declared that we would become petroleum independent within the next ten years as part of our effort to strip terrorism of its resources, that business, industry, academia, and everyone else would have been foursquare behind him, and we would have been much further ahead in the fight against terrorism than we are today…an enormous number of jobs likely would have been created in the process of switching over to a new energy source, and Wall Street would have been booming; third, the environmentalists would have been ecstatic; and fourth, but most importantly, the terrorists would have been deprived of much needed funding, which would have gradually strangled their efforts. (From America the Beautiful.)

(Of note: Carson’s argument is nearly identical to that of Thomas Friedman, who has repeatedly chided Bush for not using the moment of national unity after 9/11 to adopt a 10-year plan for energy independence, arguing that it would “dry up revenue for terrorists,” create jobs, and inspire young people.)

A federal stimulus for green technologies:

Providing appropriate incentives to the American people should result in a plethora of ideas and inventions to solve our energy problems. Can you imagine the amount of hydroelectric power alone that is available to us, situated as we are between two oceans? We simply need to invent efficient and inexpensive ways to harness that energy. (From America the Beautiful.)

Yes, pull the plug on grandma:

Our mind-set is to automatically pull out all medical stops—even if that means literally torturing loved ones during their last few months of life. What if rather than always putting terminally ill patients in intensive care units—where we poke, prod, test, and operate ad nauseum—we allowed most people the dignity of dying in relative peace and comfort, at home, surrounded by loved ones, with hospice care or some other medical attendant if necessary? Agreement on who should be treated and who should not be treated would require an extensive national discussion that could hopefully result in some helpful basic guidelines. Obviously any such guidelines should allow for flexibility and choice. And decisions should be based not merely on age but on the viability of the patient. (From his 1999 book, The Big Picture.)

I realize that some feel the United States and other world powers with nuclear weapons have no right to declare that others cannot have them. On the surface this seems like a fair argument, but can you imagine how many deaths would occur if everyone were given a handgun? Perhaps it would be fair to give everyone a handgun, but it certainly would not be wise. (From America the Beautiful.)

“It depends on where you live, I think. If you live in the midst of a lot of people and I’m afraid that that semi-automatic weapon is going to fall into the hands of a crazy person, I would rather you not have it. If you live out in the country somewhere by yourself, I have no problem.” (In an interview with Glenn Beck)

These ideas don’t seem to be the kind of red meat Iowa Republicans are clamoring for—and Carson is already beginning to walk a few of them back, emphasizing his love of the Second Amendment on a recent swing to the Hawkeye State. It will be interesting to see if Carson talks about them while courting tea partiers in the Hawkeye State.