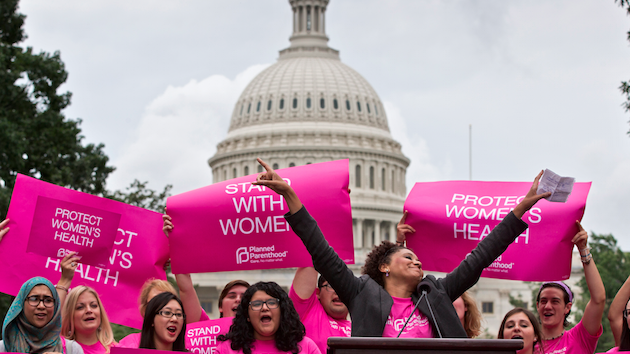 The massive government spending bill President Barack Obama signed on Tuesday contains provisions that bar federal funding for most abortions, forbid federal and local funding for abortions in the District of Columbia, and deny abortion funds for federal prisoners. But Planned Parenthood supported the legislation anyway. Why? Because this spending bill doesn’t contain any new restrictions on abortion, and Planned Parenthood feared that if this bill was defeated, the new Republican-dominated Congress that takes office next month would pass its own spending measure—complete with harsh new limits on abortion rights.

Language barring federal funding for abortions has been attached to appropriations measures since 1976. Congress first passed the provision, known as the Hyde Amendment, three years after Roe v. Wade, the landmark Supreme Court decision that held that women have a constitutional right to abortion. Though Planned Parenthood opposes the Hyde Amendment, the group doesn’t lobby lawmakers to vote against wide-ranging spending bills because of this provision, which enjoys overwhelming Republican support and has become a staple of spending legislation.

Many Democrats had threatened to block the appropriations bill after outcry over a big Wall Street giveaway tucked into the legislation. But blocking the bill could have meant a hit to reproductive rights next year, Planned Parenthood spokesman Eric Ferrero says. If Congress had failed to approve the spending measure, which funds the government through September, lawmakers would have had to pass a short-term bill continuing government spending at current levels for a few months. Then, once Republicans took over the Senate in January, they would have been able to craft a full spending bill without much Democratic input. With control of both houses of Congress, Republicans would have had a good chance of sneaking new anti-abortion measures into the bill. The “anti-women’s majority could push any number of dangerous provisions,” Ferrero notes, including reduced family planning funding and a measure that would allow hospitals to refuse to offer certain abortion services.

“The appropriations bill is an important step in the right direction when it comes to women’s health—holding the line on deeply unpopular abortion restrictions and expanding access for Peace Corps volunteers,” Planned Parenthood president Cecile Richards said in a statement.

Planned Parenthood’s support for the spending bill was far from assured. A month ago, when lawmakers were still hashing out what to include in the bill, Republicans tried to shoehorn in a number of anti-abortion measures. One of those was the Abortion Non-Discrimination Act, which would have allowed doctors, health insurance companies, and hospitals to decline to provide certain abortion services, and to refuse to give out information to women about abortion options. Another proposal would have prevented health insurance plans sold through the new Obamacare exchanges from covering abortion and would have nixed tax benefits for small businesses that buy health plans that cover abortion. Democrats managed to strip both provisions from the final bill.

Planned Parenthood and its allies feared that GOPers would force a reduction in funding for family planning programs next year. Here, again, Dems held their ground. The Title X Family Planning Program, which helps low-income women avoid unwanted pregnancies, got an appropriation of about $300 million, the same as last year. Congress doled out $101 million to the Teen Pregnancy Prevention Program, and roughly $600 million for international family planning programs.

In addition to staving off Republican assaults on abortion rights, Dems forced into the spending bill new rights for some federal employees. For the first time, Peace Corps members will now have access to (limited) abortion coverage. The federal government will now cover abortion for Peace Corps volunteers in cases of rape or incest, or to save the life of the mother—as it does for most other women on the federal payroll. A recent study by researchers at the University of Ottawa, Princeton, and Cambridge Reproductive Health Consultants found that out of 433 Peace Corps volunteers interviewed, 8.8 percent reported that they had been raped or sexually assaulted during their service.

“On balance,” says Heather Boonstra, the director of public policy at the Guttmacher Institute, a pro-abortion-rights think tank, “in terms of the reproductive rights agenda, we could have been in a lot worse position than where we ended up.”