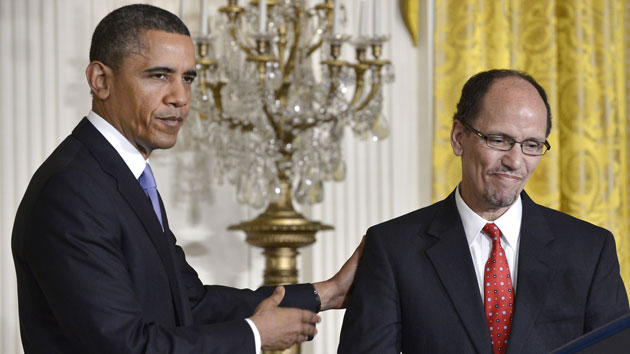 Whether or not the Democrats lose their Senate majority on Tuesday, President Barack Obama will need to show some fight after the midterm elections. If the Republicans triumph, Obama must do something to rally his discouraged supporters and show he won’t spend his final two years as a truly lame-duck president. If the Dems manage to hold the Senate, the president, who has been pinned down by ISIS, Ebola, and other crises, will still be looking for a way to take back the political narrative and flex his political and policy muscle. Either way, he has a good option: nominate Tom Perez as attorney general.

The chatter in Washington is that Obama will announce his pick to replace the outgoing Eric Holder soon after Election Day, and Perez is on the White House’s short list. Based on his resumé, Perez, who is now secretary of labor, is a reasonable choice. He’s also one of the administration’s most stalwart progressives.

Before taking charge of the Department of Labor in July 2013, Perez was the assistant attorney general of the Justice Department’s civil rights division. The office had been eviscerated under George W. Bush, and Perez revitalized it by mounting voting rights cases and legal challenges to discrimination against gays and lesbians. During his tenure, the division opened a record-breaking number of investigations into police abuse and forged wide-ranging agreements to clean up various police forces accused of misconduct, no small matter given recent national debates and controversy sparked by the Ferguson episode and the Trayvon Martin shooting.

Perez has long demonstrated a commitment to civil rights and a robust role for government. As a federal prosecutor during George H.W. Bush’s administration, he won notable convictions of several neo-Nazis who had committed a string of murders designed to spark a race war. He later worked for Sen. Ted Kennedy before being elected to the Montgomery County council in Maryland and joining the board of an immigration rights group.

Since the financial meltdown, the Justice Department has faced criticism that it did not prosecute the Wall Streeters most responsible for triggering the catastrophic recession that hit in 2008. That wasn’t Perez’s call. But as chief of the civil rights division, he did target big banks by bringing enforcement actions against financial institutions for racial discrimination and for foreclosing on active-duty military service-members in violation of federal law. He created a fair lending unit within the division that went on to win a $335 million settlement against Bank of America and a $175 million settlement against Wells Fargo. These were the two largest fair-housing settlements in Justice Department history.

After being promoted to run the Labor Department, Perez also fired up that bureaucracy. As Politico recently noted,

It was one of the federal government’s sleepier outposts for most of the dozen years that preceded Perez’s arrival just over one year ago. But Labor has been newly energized under Perez. “Enforcement activity is up,” Alfred Robinson Jr., who was an acting wage and hour administrator for the Labor Department during the George W. Bush administration, noted earlier this month in a blog post. The department has also raised its public profile on issues like minimum wage and paid medical leave and lavished favorable attention on companies that give employees what Perez calls “voice.”

So the guy has the legal, policy, and management chops to be attorney general. And if Obama nominated him, the president would send a resounding message that he remained committed to a progressive agenda.

Now for the politics: Perez is the son of exiled Dominican immigrants. Hispanic members of Congress, immigration reform advocates, and labor organizations have called on Obama to tap him for the nation’s chief law enforcement job. On Friday, the National Hispanic Leadership Agenda, a coalition of 39 leading Latino outfits, sent the president a letter requesting he name Perez. Does the president want to disappoint key constituencies at a time when he could use all the friends he can get? Other names reported to be on the AG short list—Solicitor General Don Verrilli and US attorneys Loretta Lynch and Preet Bharara—will likely not elicit much grassroots enthusiasm.

On the other side, would Republicans, who are already on the outs with Latino voters over their opposition to immigration reform, fight this high-profile nomination and risk further alienating a growing voting bloc? Perhaps.

Perez has been a favorite target of the right for years. While he did win confirmation relatively easily when he was nominated to be assistant attorney general, with a 72-22 vote in the Senate, some GOPers had tried to stop him, citing Perez’s support of immigration reform and (discredited) allegations concerning a voter intimidation case involving the New Black Panther Party.

But when Obama tapped Perez to be labor secretary, Republicans, as the White House expected, put up more resistance. Some in the party didn’t fancy Perez’s success revitalizing the civil rights division. And critics on the right claimed he had cut a corrupt deal to prevent a Minnesota housing discrimination case from reaching the Supreme Court. The case was odd and complicated: landlords had used a federal fair-housing law to oppose an effort by the city of St. Paul to enforce basic housing standards. The property owners had argued that a crackdown on horrible conditions at low-income housing sites discriminated against minority tenants.

Civil rights advocates feared that if this weird case landed before the highest court, Chief Justice John Roberts and his fellow conservatives would use the occasion as an opportunity to gut the fair housing law. But city officials offered Perez a deal: they would drop their Supreme Court appeal, but only if the Justice Department declined to support a separate case filed against St. Paul by a whistleblower who alleged that the city had failed to use $180 million in federal funds meant to go to programs for lower-income residents. Perez consulted with the appropriate ethics and professional responsibility officials within the Justice Department—and the department official with authority over the whistleblower’s case—and he received green lights from all before accepting the offer. (The city of St. Paul was required to agree to meet the spending obligations in question in the future.) The maneuver helped preserve an important civil rights law—which many conservatives have long wanted to weaken—and a bunch of Republicans were hopping mad and accused Perez of bribery.

Not surprisingly, Senate Republicans tried for months to stymie Perez’s nomination as labor secretary. Eventually, he was put to a vote as part of a larger deal involving other appointments that had been delayed by GOP lawmakers. In July 2013, Perez was confirmed on a party-line vote of 54-46.

Should Obama appoint Perez, it’s a good bet that Senate Republicans would see red and kick off a holy brawl. (In a taste of things to come, a Wall Street Journal columnist raised the St. Paul case again just this week.) But win or lose, a fight could help Obama. It would signify that the president is serious about advancing voting rights, civil rights, immigration reform, and fair lending—and it could well yield the extra benefit of reinforcing the negative attitudes Latinos have toward the Republican Party.

Presidents are defined in part by their battles—especially the ones they choose to wage. Perez presents Obama a chance to take a stand that could bolster his party’s political prospects and boost his policy agenda, at a time when he surely has to do both.