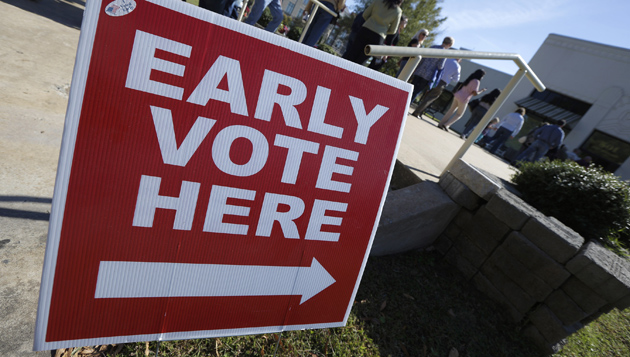 Jeremy Bird guided Barack Obama to victory in Ohio in 2008, a year, Bird recalls, when “we didn’t see lines and barriers and obstacles” to the ballot box that had so badly marred Ohio’s previous presidential election. But as Obama’s national field director in 2012, Bird watched Ohio with dismay. Voting in Ohio had gotten harder—lines were longer, early voting days pared back, evening hours restricted—but no laws had changed since 2008. So what had happened? Bird says he knows the culprit: Republican Jon Husted, Ohio’s secretary of state. As the state’s chief election officer, Husted has considerable latitude to shape election rules and expand—or limit—access to the ballot box.

On Election Day this year, Bird is again watching secretaries of state. This time around, Bird is the head of iVote, a group that is targeting secretary of state races in four key battleground states—Colorado, Iowa, Nevada, and Ohio. And with good reason: The results of these four races will have serious consequences for voting rights, and they might even help determine the winner of the 2016 presidential campaign.

Each of the four races iVote is targeting, Bird says, features a Democratic candidate seeking to expand voting rights and a Republican pledging—directly or indirectly—to do the opposite. Bird’s group is spending more than $1.25 million on TV advertisements alone, in addition to online ads, grassroots organizing, and direct contributions to candidates where possible under state law.

Perhaps the Democrats’ best shot at winning a key secretary of state race is in Nevada. There’s no daylight in the polls between Democratic state Treasurer Kate Marshall and Republican state Sen. Barbara Cegavske, but there is plenty of space between their positions. Marshall backs same-day voter registration and greater transparency in political spending in state races. Cegavske, for her part, opposes those ideas and instead wants a new voter ID law. In 2011, Cegavske joined several other Nevada lawmakers in proposing a bill eliminating early voting, and she has voted against new campaign finance measures to beef up disclosure of money in politics.

In Colorado, outgoing Secretary of State Scott Gessler has probably garnered more headlines than his five predecessors combined—and not for reasons that a Democrat like Bird would appreciate. Gessler offered to raise money to help pay off fines incurred by the Larimer County Republican Party for not submitting required campaign finance filings. The problem: Gessler’s office issued the fine. (He backed down the fundraising appearance.) A judge struck down Gessler’s directive to county clerks to stop sending 2012 ballots to so-called inactive voters—namely, people who hadn’t voted in the 2010 elections, which included troops stationed overseas. And in 2011, Gessler claimed that 5,000 “noncitizens” had voted in the 2010 elections. Colorado officials later vetted 1,400 of those names and found that 1,200 of those people were in fact eligible voters. (No prosecutions resulted from Gessler’s allegation.)

The race to replace Gessler is close. Democrats are abuzz over the candidacy of Joe Neguse, a rising political star and the son of Eritrean immigrants, who has billed himself as the anti-Gessler. “I’m the guy running to clean up Scott Gessler’s mess,” he said in announcing his candidacy. But Neguse trails Republican Wayne Williams by single digits in polls. Williams, meanwhile, supports the type of voter ID law implemented by conservatives nationwide. Despite efforts by Democratic Gov. John Hickenlooper and the Democratic-controlled state Legislature to expand voting rights with universal mail-in voting and same-day registration, a Republican secretary of state could throw a wrench in Colorado’s voting system come 2016.

In Iowa, the race between Democrat Brad Anderson and Republican Paul Pate is a dead heat. Anderson, who managed Obama’s Iowa campaign in 2012, has called for mail-in voting, no-excuse absentee voting, and online voter registration. Pate, Anderson’s opponent, toes the GOP line in supporting a voter ID law, a divisive measure that Republicans say protects the integrity of elections and that Democrats say aims to disenfranchise college students and minorities.

Ohio’s secretary of state race is likely to be Democrats’ biggest disappointment of the four campaigns. The Democratic candidate, state Sen. Nina Turner, is probably the best known of the four iVote-backed candidates: She’s a fixture on MSNBC, which named her one of its “Women Candidates to Watch in 2014,” and her supporters include EMILY’s List, Howard Dean, and talk-show host Jerry Springer. (At a recent debate in Columbus, Turner quoted Lyndon Johnson, Martin Luther King Jr., and Justin Timberlake—she said she wanted to “bring sexy back” to voting.)

For long stretches, Turner was neck and neck in the polls with Republican Jon Husted, whose restrictions on Ohio voting rights have enraged state and national Democrats. But Democratic gubernatorial candidate Ed FitzGerald’s implosion has dragged down the rest of the party’s ticket, and in its final 2014 poll, the Columbus Dispatch showed Turner trailing by 21 percentage points.

To hear Jeremy Bird tell it, the consequences of these four secretary of state races could mean the difference between smooth, snafu-free elections in November 2016 and the type of debacles seen in Florida in 2000 and Ohio in 2004. iVote, Bird says, is a way of taking the fight to the “voter fraud” crowd seeking to limit the vote. “We need to be on the offensive with voting rights,” he says. “We’ve relied on the courts for too long.”