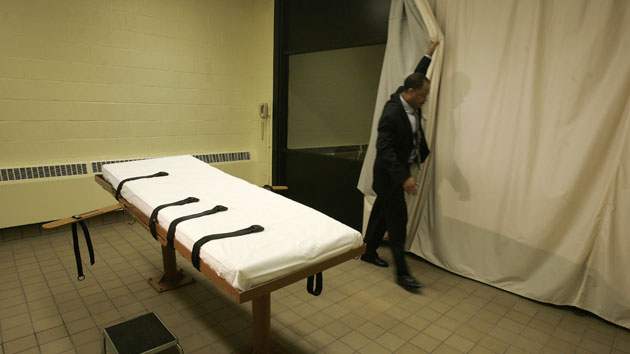 The death chamber at the Southern Ohio Correctional Facility in Lucasville, Ohio.Kiichiro Sato/AP

Update (12/12/2014): On Thursday, the Ohio Senate approved HB663 with a 20-10 vote. Next week, the bill will return to the Ohio House for consideration of the Senate’s changes, and will then go to Gov. John Kasich, who is expected to sign it into law.

The execution of Dennis McGuire on January 16 of this year did not go as planned. Injected with an untested cocktail of drugs, the Ohio death row inmate gasped, choked, and writhed in his restraints. McGuire was declared dead after 26 minutes, having endured the longest execution in the state’s history.

“To a degree of medical certainty, this was not a humane execution,” an anesthesiologist testified in a subsequent federal lawsuit against the state’s execution team. The lawsuit, filed by McGuire’s children, declares the execution method used on McGuire cruel and unusual and seeks to block its further use in Ohio.

Yet state lawmakers are now rushing to pass a “secret executions” bill that would make it harder to know what really happens in the death chamber. If passed, HB663 will drop a veil of secrecy over the death penalty by exempting anyone participating in a lethal injection from public records requests that might reveal their identities or duties. It would apply to medical and nonmedical staff, companies transporting or preparing supplies or equipment used in executions, and the providers of the drugs used in the lethal injection.

Introduced just two weeks ago in a lame-duck session, the bill sailed through committee and was passed by the state House last Thursday, 62 to 27. The bill now moves to the Senate, which could vote on it as early as the first week of December. Most of the measure’s support comes from Republicans, who control both chambers of the legislature. It is not clear whether Gov. John Kasich, a Republican who supports the death penalty but has been generous in granting clemency, will sign the bill if it comes to him. The Ohio chapter of the American Civil Liberties Union (ACLU) reports that the bill’s sponsors have claimed that they have Kasich’s support.

“This is the most extreme lethal injection secrecy bill that we’ve seen nationwide.”

After McGuire’s botched execution, a federal judge issued a moratorium on capital punishment in Ohio until January 2015. The state’s next execution is scheduled for February. This imminent deadline is part of what’s driving the legislature’s urgency to pass the execution secrecy bill. The European suppliers of the state’s preferred execution drug, pentobarbital, now refuse to sell it for use in executions. Lawmakers hope that the promise of anonymity will goad local compounding pharmacies into providing the drug.

If it goes into law, the bill would make it exceedingly difficult for the public or the press to investigate executions. Under the law, participants in executions may be sued if they reveal any confidential information or identities. The law also would undermine prisoners’ due process rights, according to the ACLU: By exempting the participants in lethal injections from subpoenas and discovery proceedings, the law would make it virtually impossible for inmates’ lawyers or courts to depose or question anyone with knowledge of a particular execution or death-penalty protocol. A late amendment to the bill does make limited room for disclosure through private judicial hearings.

Thirteen other states have passed or tried to pass these sorts of gag rules. The bills are also growing more broad. “The trend we see in the more recent confidentiality statutes is an enhancement of both the breadth and depth of secrecy surrounding execution procedures,” notes Megan McCracken, an attorney at the death penalty clinic at the University of California-Berkeley law school. 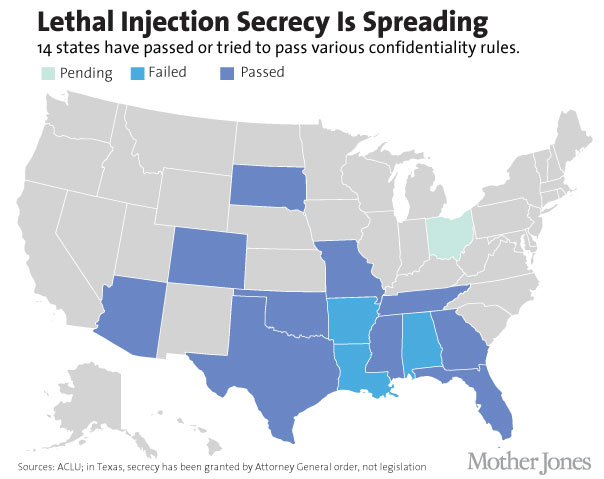 But Ohio’s bill goes even further. First, it would void any contract, domestic or international, that would hinder the state’s ability to obtain execution drugs. It also extends professional immunity for participants in executions, stating that licensing organizations can not “take any disciplinary action against” physicians, pharmacists, or other staff. Many professional associations’ codes of conduct prohibit participation in capital punishment, and the Ohio State Medical Association has expressed concerns about the bill’s “intent to statutorily void” parts of the medical ethics code. “I think this is the most extreme lethal injection secrecy bill that we’ve seen nationwide,” says Brickner.

The original version of the bill, sponsored by state Rep. Jim Buchy (R-Greenville), sought to ensure permanent blanket secrecy. An amended version requires individuals and companies involved in executions to opt-in for anonymity, and would make their identities public 20 years after they finish their business with the state. “20 years later is a rather pointless exercise,” says Mike Brickner, senior policy director at the ACLU of Ohio. “If the company has a 10-year contract, you wouldn’t see that information in your lifetime.”

With four botched executions in the last eight years, Ohio’s use of the death penalty has come under increasing scrutiny. Beyond practical considerations regarding lethal injection, the legislature’s rush may also be an attempt to quiet the debate on capital punishment, notes Brickner. Yet it may have the opposite effect. “This bill is fundamentally broken,” says Brickner. “There will be no shortage of lawsuits challenging it.”