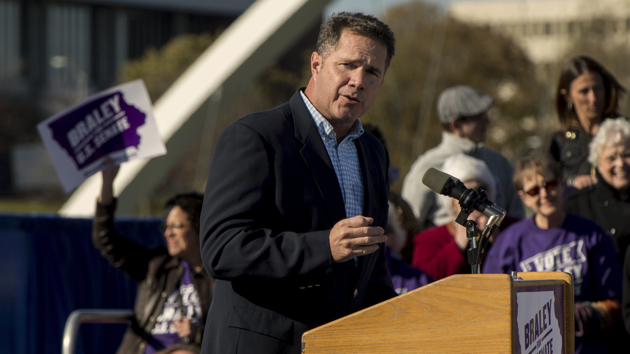 Rep. Bruce Braley, the Democratic candidate for Senate in Iowa, owes his political career to the Iraq War. When he first ran for Congress, in 2006, Braley campaigned heavily against the war, vowing to oppose funding for continued operations until President George W. Bush set a timetable for handing over security responsibilities to Iraqi forces. Iowans rewarded Braley with a House seat.

Now Braley is running for an open US Senate seat—and his promising political career could crater thanks to that same war. With Iraq back in the news this year thanks to ISIS, polls have shown that voters are once again considering terrorism when making political decisions. Braley’s opponent, Republican state Sen. Joni Ernst, has taken full advantage. On the campaign trail, she warns Iowans of the threat of ISIS, frequently cites her experience as a National Guard commander in Iraq, and slams Braley’s opposition to funding the war.

“Our nation is no safer than it was a dozen years ago,” Ernst told a crowd of about 15 during a recent campaign stop in Guthrie Center, pointing to ISIS as an immediate and grave danger to US interests and, perhaps, the homeland. She’s fond of pointing out the fact that she once trod on some of the ground ISIS now occupies. “We have got to do better, because unfortunately,” she said, “if things continue down this path, we will be recommitting our Iowa sons and daughters to that region.”

Ernst’s allies also play up foreign policy threats. “I’m dying to have a voice that will tell radical Islam that we’re going to fight you and keep the war over there,” South Carolina Republican Lindsey Graham, one of the Senate’s leading war hawks, said in Guthrie Center during a recent swing through Iowa on Ernst’s campaign bus. Graham is up for reelection himself this year, but holds a safe Republican seat—”I tend to do better when I leave the state,” he says—so he visited Iowa to advocate for electing a fellow politician who hails from the armed services. “I’m dying to have someone in the Senate who has been deployed themselves,” he noted, “who knows what it’s like to miss a birthday and a holiday, who’s experienced what it’s like to be in a combat theater, and who’s seen the enemy up close.” The world is a scary place full of enemies, Graham explained—and only electing Joni Ernst can keep America safe.

Ernst has made hay of Braley’s opposition to funding the war. Those votes to try to force Bush to bring the war to a halt? Ernst has said that Braley “failed our veterans,” and portrayed them as a betrayal of the people we sent into combat. “Congressman Braley has a record of not supporting men and women as they’re serving overseas,” she said at another campaign stop alongside Graham. “He’s voted twice to defund our men and women as they were serving in combat in Iraq and Afghanistan.”

Although Ernst readily attacks Braley—always tying him to perceived fecklessness from President Obama—for perceived foreign-policy mishaps in letting ISIS proliferate in Syria and Iraq, she’s been more hesitant to lay out exactly how she’d like to see the United States proceed. Even as raising fears of Islamic terrorists becomes acceptable campaign fodder, directly calling for US troops to be sent back to Iraq is still a step too far. But that won’t be much comfort to Braley if he’s no longer in Congress next year. Ernst has held a narrow lead in most recent polls headed into tomorrow. And listening to Ernst and her allies on the campaign trail in Iowa during these final days of election season, it often seems that Iowans have forgotten exactly why they sent Braley to Congress in the first place.