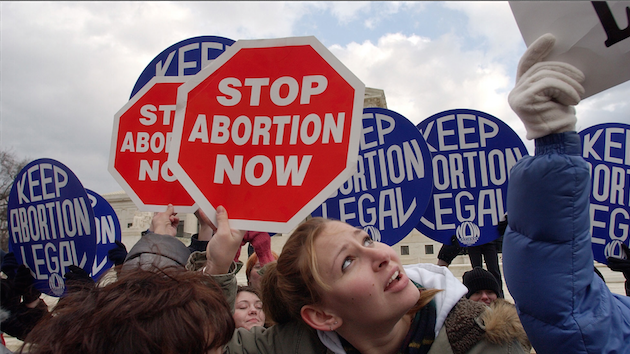 The GOP wave didn’t just crash into the US Senate. It flooded state legislatures, as well. By Wednesday evening, Republicans were in control of 67 of the nation’s 99 state legislative chambers—up from 57 before the election. It’s still unclear which party will control two other chambers.

Already, anti-abortion advocates are calling it a big win. Hundreds of the country’s most extreme anti-abortion bills pop up in these statehouses every year, and Tuesday’s results won’t do anything to put a stop to that. But reproductive rights advocates also suffered big setbacks Tuesday in places where they had actually been playing offense. Now, Democratic losses in states like Colorado, Nevada, New York, and Washington could torpedo their efforts to expand reproductive rights.

New York Republicans won a tiny majority in the state Senate, a development that could kill the proposed Women’s Equality Act—an omnibus bill that includes an equal pay measure, protections against pregnancy discrimination, and stronger domestic-violence and sexual-harassment laws. The bill had previously stalled in the Democratic Senate because of a provision that would give New York women an affirmative right to abortion. But in the waning days of the campaign, Gov. Andrew Cuomo, a Democrat, had pressured legislators to agree to pass the bill in the next session, and the state’s Planned Parenthood affiliates were confident that the election would produce a friendlier Senate.

“We were really hopeful,” says Christina Chang, a spokeswoman for Planned Parenthood NYC Votes. “But a lot of the folks who won seats have not expressed support for the Women’s Equality Act…After last night’s elections, we have a harder road ahead of us.”

In both Colorado and Washington state, Democrats held majorities in both legislative houses and controlled governor’s mansions going into Tuesday night’s election. By Wednesday night, Republicans appeared on their way to controlling the Colorado Senate and they had captured and outright majority in the Washington Senate.

In recent years, Colorado Democrats have helped reproductive rights advocates check a number of items off their wish list. They increased Medicaid reimbursement rates for family planning services—a move that encourages more providers to offer that type of care—and they passed funding for comprehensive sex education. In 2012, Democrats blocked an effort by anti-abortion forces to pass religious freedom exemptions for health care providers, which abortion rights groups said would jeopardize access to contraception. Last year, Democrats repealed the remnants of a law that criminalized abortion. And this year, Democrats pushed for the Reproductive Health Freedom Act, which would have blocked new abortion restrictions, before backing down in the face of conservative opposition.

That kind of progress will likely come to a halt if Republicans take over the Senate—although reproductive rights advocates again remain hopeful.

“So many of the Republicans in Colorado sent messages to voters about being advocates of women’s health and not wanting to insert government into private decisions,” says Cathy Alderman, a spokeswoman for Planned Parenthood of the Rocky Mountains. “We’re hoping they weren’t just using those issues as political ploys.”

In Washington state, Democrats had been fighting for a bill that would require abortion coverage in most insurance plans sold on the state’s Obamacare exchange. It was a bold measure at a time when many conservative states were banning abortion coverage. The bill stalled in the Senate, where a few renegade Democrats frequently sided with the powerful Republican minority. But additional GOP gains in the Senate would “derail any hope” that the bill will pass, says Elizabeth Nash, a researcher with the Guttmacher Institute, a pro-abortion-rights think tank.

In Nevada, Democrats—who controlled the statehouse before Tuesday—supported a bill to establish comprehensive sex education. The state has some of the highest sexually transmitted infection and teen pregnancy rates in the country, yet schools rarely teach condom use or encourage STI testing. On Tuesday, Republicans won control of the Legislature. Republicans roundly opposed the bill the last time it was introduced, and there is little chance that they’ll allow it to pass this year.

“I can’t say that the Republican Party has ever been behind Planned Parenthood issues in Nevada, but we do know Nevada is a very pro-choice state,” Alderman says. “We’re optimistic and hopeful that they’ll see comprehensive sex education as smart policy, but we haven’t had their support in the past because of abortion opponents who come out and say that somehow this legislation is about pushing abortion.”

But while turnover in those states is a blow to reproductive rights groups, the 2014 elections didn’t change change the map for abortion rights quite like the 2010 election, when Republicans took over an even larger number of statehouses.

Nash argues that in some other states where Democrats suffered big losses, abortion rights will likely be protected by divided government. In Iowa, Democrats—who, this session, just barely held back an onslaught of anti-abortion bills—hung onto the state Senate. In New Mexico, where Republican Gov. Susana Martinez won reelection, Democrats lost the House but held the Senate. Republicans now control the New Hampshire statehouse, but they failed to unseat Gov. Maggie Hassan, a Democrat who supports abortion rights and will veto most anti-abortion legislation.

In West Virginia, Republicans took control of the House for the first time since 1931*. The state Senate, meanwhile, is evenly divided between the parties. But the state was already hostile to abortion rights: Many West Virginia Democrats, including Gov. Earl Ray Tomblin, supported harsh anti-abortion bills when their party controlled the Legislature.

So in West Virginia—and many other red states—Republicans didn’t need a wave year for abortion rights to be in jeopardy. The outlook was pretty bleak already.

Correction: The original version of this article incorrectly stated that the West Virginia governor was up for reelection during this year’s midterms.