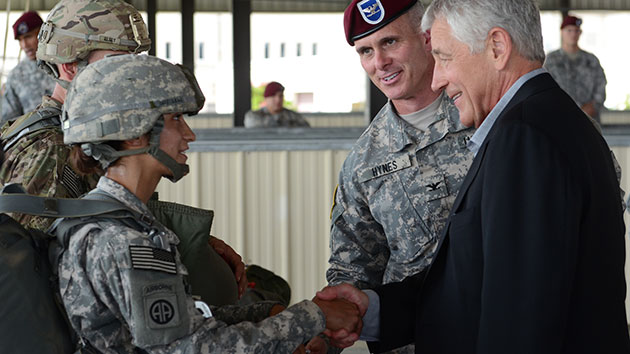 There’s little the Washington-centric political-media universe loves more than the story of a fallen star. The defenestration of Defense Secretary Chuck Hagel has reporters and pundits in a schadenfreude-driven tizzy. Was he fired? Was he in over his head? OMG, look at how the White House is dumping on him, as he departs! Who’s passing nasty notes in class about him?

The presumably forced resignation of Hagel is indeed big news. The Obama administration is confronting a host of new national security challenges: ISIS, Ukraine, Ebola. So the guy (or gal) in charge of the Pentagon has to be nimble and able to handle this expanding and shifting to-do list. And Hagel, ever since his underwhelming performance at his confirmation hearing, has not been (at least in public) a confidence-inspiring Cabinet member. So perhaps President Barack Obama can do better—though the elbowing Hagel is receiving on the way out seems poor manners.

Yet here’s a useful exercise. Compare the red-hot media reaction to Hagel’s bye-bye to the response to the New York Times‘ eye-popping report that Obama signed a secret order to expand the US military mission in Afghanistan next year. The story about one man—yes, one of the cool kids in DC—is at least an order of magnitude higher on the MediaReax-ometer. Any tidbit from an anonymous source about de-Hagelization gets immediate attention from tweeting journos. But the story about this significant policy shift has prompted mostly a yawn.

In case you missed it—the story was posted online on Friday but appeared in Saturday’s dead-trees edition—the Times revealed that Obama, who last May said the United States would have no combat missions in Afghanistan in 2015 (and only train Afghan forces and hunt Al Qaeda “remnants”), had secretly authorized American forces

to carry out missions against the Taliban and other militant groups threatening American troops or the Afghan government, a broader mission than the president described to the public earlier this year, according to several administration, military and congressional officials with knowledge of the decision. The new authorization also allows American jets, bombers and drones to support Afghan troops on combat missions.

This is a quasi-BFD—and the result of what the Times called “a lengthy and heated debate that laid bare the tension inside the Obama administration between two often-competing imperatives: the promise Mr. Obama made to end the war in Afghanistan, versus the demands of the Pentagon that American troops be able to successfully fulfill their remaining missions in the country.”

In other words, Obama, for good or bad, has decided to extend the war he said he was ending. This report did not produce a cable news frenzy or a storm of tweets. But it’s just as important as who’s going to be in charge of implementing this major change of plans—if not more so.