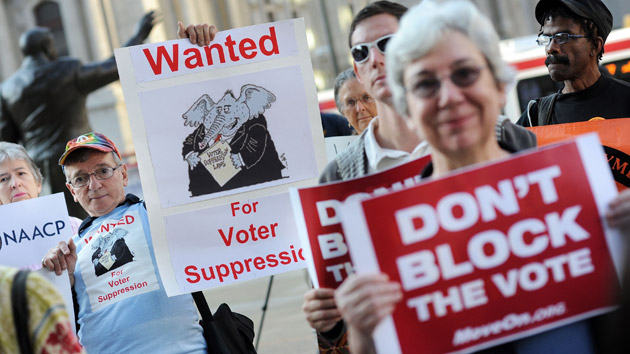 This story was originally published on BillMoyers.com.

There’s a battle underway to protect Americans’ right to vote, and recent news from the frontlines has been grim. Republicans, assisted by the Supreme Court’s conservative majority, have passed new restrictions at a breakneck pace. Texas’ draconian voter ID law was just upheld, possibly disenfranchising as many as 600,000 voters. So, too, were measures to make voting more difficult in North Carolina, including ending same-day registration. And GOP secretaries of state in Georgia and Kansas have so far refused to accept thousands of voter registrations—potentially disenfranchising a lot of eligible voters on technicalities.

But that’s not the whole story. Republicans may have successfully made it tougher to vote in some states, but they’ve failed in others. They couldn’t impose a tougher voter ID law in Arkansas, where one of this year’s truly pivotal Senate races is being fought. And this week in Wisconsin, officials abandoned their efforts (at least for 2014) to impose a tougher ID law that would have targeted university students and minorities.

Their tactics also are generating bad press, which ultimately may push some otherwise unmotivated voters to get out and vote.

Meanwhile, there are a number of pro-voter campaigns hard at work this fall. In some states, activists will keep a sharp eye on attempts to suppress the vote. In others, officials are trying to make the process of voting easier. And across the country, platoons of vigilant lawyers will be on hand to make sure that eligible voters aren’t intimidated by so-called “poll watchers” or forced to jump through hoops that aren’t required under the law.

With all the depressing news about voting access, it’s easy to forget that in states with half the US population, registering to vote has never been easier. Similarly, getting information to voters has never been simpler or more efficient—and election officials are taking advantage of new tools to engage and inform voters. All is not lost.

Here are 10 reasons not to be too pessimistic about voting in 2014.

1. Grassroots Efforts to Get Out the Vote

In several Southern states, young organizers spent the summer organizing “Freedom Side,” an Internet-fueled modern iteration of 1964’s Freedom Summer. Better Schools, Better Jobs set a goal of registering 20,000 new voters in Mississippi. The liberal blog Daily Kos is raising significant funds to get out the Native American vote in South Dakota. In Chicago, low-wage workers who got a taste of politics working with the Fight for 15 campaign are now organizing to get voters registered. Vote Mob is connecting millennial activists online in a handful of battleground states. Nuns on the Bus have been on a nationwide tour to boost turnout. And these are just a few examples of dozens of smaller campaigns by various groups incensed by the GOP’s effort to roll back the clock on voting rights.

Complimenting those grassroots efforts is a major push by Senate Democrats, dubbed the “Bannock Street Project,” to save their majority by making the 2014 electorate look more like that of a presidential year than a typical midterm—younger and more diverse. We can’t know how effective their efforts will be, but they’ve invested $60 million, and put 4,000 paid staffers to work in 10 key states for what The New York Times described as the Democratic Senatorial Campaign Committee’s “largest and most data-driven ground game yet.”

3. The US Department of Justice Will Be Watching

Attorney General Eric Holder has made voting rights one of the top priorities of his Civil Rights Division, and they have people ready to go into federal court to protect voters—they’ll seek orders to extend polling place hours or ensure that other steps are taken so that eligible voters can cast their ballots, and those ballots will be counted. These election cops aren’t heavily promoted or widely discussed, but they’ve been on the beat for years.

4. The Lawyers Committee For Civil Rights Under Law Also Will Be On the Lookout

The Lawyers Committee not only runs a toll-free nationwide nonpartisan Election Day hotline (1-866-OUR-VOTE) that voters can call if problems arise, they’re also poised to go into federal and state courts if necessary. The Committee enlists thousands of volunteer attorneys across the US. They’re involved in pre-Election Day legal battles like the one they’re fighting in Georgia, where, based on dubious claims that some of the forms may have been forged, the conservative secretary of state is holding more than 40,000 new voter registrations in limbo.

The most empowering development in recent years may also be the most overlooked. A decade ago, a cellphone couldn’t tell you how to register in your state, confirm your registration status, locate your polling place, give you directions, review any new rules or regulations that you might have to overcome, tell you what kind of machine you’ll be voting on, and possibly translate all that info into Spanish or other languages. But today these tools are commonplace and just a quick Google search away. Both major political parties have integrated these technologies into their turnout operations, as have civil rights groups like the Lawyers Committee. In other words, there’s more how-to information and help available than ever—even in states where partisans are trying to police the process.

6. States Are Identifying Eligible Voters and Urging Them to Register

In the District of Columbia and 11 states—including battleground states like Colorado and Nevada—some 11.6 million eligible but unregistered voters have been identified since the summer of 2012 by ERIC, the Electronic Registration Information Center, a nonprofit that has worked with state election officials. These voters have been contacted and urged to register, and the data ERIC has gathered has been used to update official voter rolls. It appears that this effort has been a real under-the-radar success.

Not all states with tough new voter ID laws are like Texas, which, as Supreme Court Justice Ruth Bader Ginsburg noted in a recent dissent, has done almost nothing to inform voters about changes in the state’s election law. Some red and purple states, like South Carolina, Mississippi and Virginia, have launched surprisingly aggressive public information campaigns to urge would-be voters to get the documents necessary to cast their ballots. In some states, financial help is also available for people who might struggle to come up with the fees for state IDs.

People with driver’s licenses in 20 states, representing more than half the country’s population, can register to vote online. This is another example of states making the process easier, not harder, and it includes some, like Georgia, where there are ongoing legal fights over the franchise.

In recent elections, a handful of tea party-affiliated groups have threatened to police the vote—and intimidate voters—by challenging their eligibility at polling places. The leading example of this, TrueTheVote, has been barred from some polling places for being disruptive. But at the end of the day, their polling place posses have rarely materialized. And in 2014, the group is asking volunteers simply to report suspicions.

In 2000, during the presidential election in Florida, and again in 2004 in Ohio, people were alarmed to discover that the voting process may have been gamed by partisans. But since then, many Americans have heard all about how the GOP keeps trying to make it harder for traditionally Democratic constituencies to vote. Knowledge is power here, because the bottom line is that the hurdles red state legislatures have put in place aren’t impossible to surmount. And there is some evidence that attempts to suppress the vote in 2012 may have led to a backlash, ultimately increasing turnout among at least some groups.

None of this is reason to pop the champagne. One of our two major parties is facing strong demographic headwinds, and has responded with a concerted, multifaceted campaign to make it as hard as possible within the law to exercise a fundamental right of democracy. That party controls two dozen state legislatures, and in many cases has been successful erecting new barriers in front of potential voters.

But it’s important to keep in mind that there are also individuals and institutions pushing back, trying to enlarge the electorate. Hopelessness leads to complacency, and complacency is the ultimate tool of voter suppression. So get out and vote!