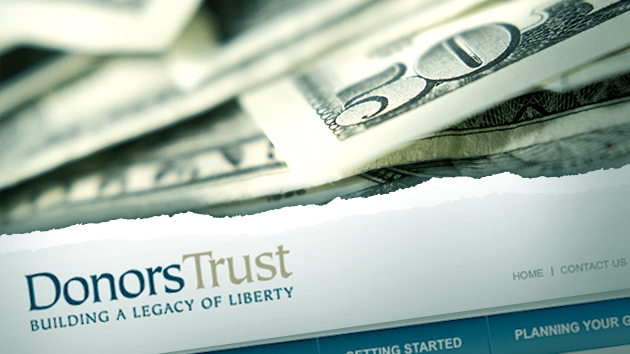 Whitney Ball is one of the most important money people in the conservative movement. Though she receives little public notice, she controls DonorsTrust, a fund that over the years has distributed more than $400 million to underwrite a host of right-wing operations, including the National Rifle Association, the Heritage Foundation, Grover Norquist’s Americans for Tax Reform, and the Koch brothers-backed Americans for Prosperity. A self-described libertarian, Ball set up this fund in 1999 as something of a cash box for wealthy conservatives who wanted to be sure that the money left behind when they died would not be used by liberal-minded heirs to finance their own favorite political causes. So before they expire, these millionaires and billionaires direct their assets to Ball’s fund in the comfort of knowing that her group will responsibly manage their wealth in accordance with their ideological wishes. The priority for DonorsTrust, Ball said in a 2005 interview, is to “safeguard donor intent.” But a few years ago, Ball became involved in an unseemly estate controversy, when her father, a lawyer in West Virginia, unethically handled the wills of three elderly people and Whitney Ball and her brother personally benefited from his misconduct, with nearly half a million dollars deposited in their bank accounts.

According to a ruling by the West Virginia Supreme Court of Appeals, which conducted a disciplinary proceeding regarding the matter, in the mid-1990s attorney John Ball prepared wills for two octogenarian sisters, Vivian Michael and Gladys Davis, who were long-standing clients of his. The will he arranged for Michael bequeathed a car she owned to Ball, and the wills of both sisters left all their personal property to Ball’s wife.

“To permit Mr. Ball to retain any of the proceeds of his unethical conduct would send a chilling message to the public,” the court said.

In April 1998, four months after Michael died, Ball took Davis to a bank where she changed the beneficiary of an annuity she owned. That person had been her sister Vivian, but “while at the bank,” according to the court ruling, “Ms. Davis designated Mr. Ball’s two adult children, Whitney L. Ball and John P. Ball, Jr., as the new beneficiaries of the annuity.” Ball, the court said, knew that Davis was going to make this change and had provided her with the addresses and Social Security numbers of his children. When Davis died three years later, the annuity was valued at $487,783.13. The money was distributed in equal amounts to Whitney and John Jr.

Ball, who was the executor of the wills for these two sisters, also arranged to receive a fee of 7.5 percent of the total value of the estates—though, the ruling noted, “the generally accepted maximum charge for administering an estate” was 5 percent. He pocketed nearly $1.6 million in fees for handling both estates. The wills he had drafted left money to the West Virginia University Foundation and stated that as executor Ball would help oversee the donations of these funds and be allowed to charge the foundation a fee. He netted $337,000 for this, after negotiating with the foundation an annual fee of 1 percent of the $18,400,000 the sisters left to the school. The court ruling notes that Ball also set up a will for another state resident who wanted to leave the bulk of his assets to the West Virginia University Foundation, with Ball awarding himself a 7.5 percent fee. (The court did not determine if Ball actually collected that fee.)

In 2006, after the county bar association had examined Ball’s handling of these wills, the state Supreme Court of Appeals ruled that the “evidence in this case clearly established that Mr. Ball drafted three wills in which he gave himself excessive fees as an executor, drafted two wills that improperly conveyed property to himself and his wife, and assisted in changing a client’s annuity to benefit” his children.

The court noted that Ball’s conduct was “intentional” and violated several state rules of professional conduct, and that he “violated the duty he owed to his clients.” It found that “the record does not support Mr. Ball’s contention that his conduct lacked a dishonest or selfish motive.” Regarding the annuity, the court declared that Ball’s actions were “contrary to his fiduciary obligations to Ms. Davis and his representation of her interests was materially limited by his own interests.” Overall, the court said, “Ball’s misconduct resulted in him actually obtaining over two million dollars and potentially receiving additional millions of dollars.” As punishment for his unethical actions, the court annulled Ball’s law license and ordered that he pay restitution of nearly $3 million to the three estates and the WVU Foundation. This amount included the $487,783.13 that went to his children, Whitney and John Jr.

“To permit Mr. Ball to retain any of the proceeds of his unethical conduct would send a chilling message to the public and, because of the amount of money involved, would be an incentive for other lawyers to engage in similar conduct,” the court said.

But Ball didn’t pay it all back.

Several months after the court revoked Ball’s law license and ordered the $3 million in restitution, Ball filed for bankruptcy. During the subsequent proceedings, Ball negotiated a deal with lawyers for the WVU Foundation and the three estates under which he would have to pay only $1.8 million.

There was a “possibility,” according to bankruptcy court filings, that Ball’s creditors “might attempt to make recovery from his wife and children,” if Mr. Ball could not pay the full $3 million. But the bankruptcy court noted that if the estates or the WVU Foundation did target Ball’s wife, Whitney, or John Jr. to get back the assets that ended up in their possession, the result would have likely been “lengthy and expensive” litigation. “From a bankruptcy point of view, there was a problem pulling that back in,” says John Nesius, an attorney for the estates, referring to the money that went to Whitney Ball and her brother, “because the kids were not a part of the bankruptcy proceedings.”

In order to reach an agreement with Ball, the lawyers for the WVU Foundation and the three estates agreed not to pursue any further claims against him, his wife, Whitney Ball, and John Ball Jr. With this plan, the foundation and the estates, the bankruptcy court noted, would “receive more than they would otherwise receive in liquidation and distribution of” Ball’s assets.

Whitney and her brother never were ordered to give the money back.

Contacted recently via phone by Mother Jones, John Ball, who now lives in Park City, Utah, said, “All I can tell you is that the public record speaks for itself, and I’m not in a position in which I want to speak with you.” He then hung up.

In an email to Mother Jones, Whitney Ball echoed her father: “I’m not sure there’s a whole lot I can add to the public record.” She noted that she and her brother “had no knowledge that Gladys Davis named us as beneficiaries of the insurance policy until after her death.” She insisted that Davis had done so on her own and not at her father’s “behest or suggestion.” She added, “No allegation was ever made at any time as part of the proceeding against my father that he, in fact, exercised undue influence over the clients he represented.” In her email, Whitney Ball did not address the court’s conclusion that her father had acted unethically with dishonest or selfish motive.

Whitney Ball, who at DonorsTrust oversees a fund of $100 million, also asserted, “It may be worth noting that if the creditors believed I improperly received proceeds from the annuity and that they therefore had a claim against me, they were free to pursue a claim against me rather than voluntarily agreeing to my father’s bankruptcy reorganization.” (Nesius, the lawyer for the estates, points out that “part of the settlement was not to seek anything from the children.”)

In the state Supreme Court of Appeals decision and in the bankruptcy proceedings, Whitney Ball and her brother were not accused of wrongdoing or misconduct. But they did receive hundreds of thousands of dollars that, according to the Supreme Court of Appeals, had been transferred to them due to the unethical action of their father. Asked by Mother Jones if she on her own accord ever returned the money to the estate of Gladys Davis or forwarded it to the WVU Foundation, Whitney Ball emailed, “I have no further comments on this matter.”