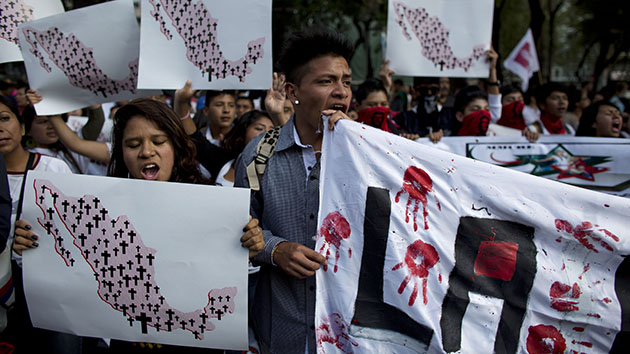 Thousands march in Mexico City on October 8 to demand that the government find the 43 students who disappeared in Guerrero.Rebecca Blackwell/AP

Nearly three weeks have passed since 43 Mexican college students went missing in the southern Mexican state of Guerrero after clashing with local police suspected of having ties to the Guerreros Unidos cartel. A break in the case seemingly came earlier this week when a mass grave with 28 bodies was unearthed, but Mexican authorities later said the students were not among the dead. (That remains unclear.) What exactly is going on?

Let’s start from the beginning. Who are these college students?
The students went missing on September 26 after trying to collect money to attend upcoming protests against discriminatory hiring practices for teachers, according to the Guardian. The students were in Iguala, a town about two and a half hours inland from Acapulco. After fundraising and protesting in Iguala, the students apparently tried to hitchhike back to their rural teacher’s college in Tixtla, about two hours south of Iguala, but police say the students eventually commandeered three buses from a local terminal.

According to the Guardian, (and an eye witness), local police chased the buses down and apparently opened fire. The buses stopped, the unarmed students got out, and the attacks got worse. Many of the students apparently fled, but roughly 20 of them were taken away in patrol cars. Later, some of the students returned to the scene and were talking to reporters when they were assaulted again by police or other gunmen. Two students reportedly died, and one was left in a vegetative state. “The body of a third student was found dumped nearby later, his face reportedly skinned and his eye gouged out,” the Guardian reported.

“Imagine being ruled by sociopathic gangsters,” wrote one journalist. “They respond to rowdy students in the only way they understand: with extreme violence designed to cause terror.”

The students’ school, the Raúl Isidro Burgos Rural Teachers College of Ayotzinapa, is one of more than a dozen around the country that formed after Mexico’s revolution with the goal of raising living standards for impoverished Mexicans and teaching poor farmers to read and write, according to the Christian Science Monitor. The schools are typically seen as leftist, and people from this school, in particular, were some of the major players in the run-up to the Tlatelolco Massacre, a violent clash between students and police in Mexico City in 1968 that led to dozens of deaths.

It’s unclear whether the students’ politics played a role in the attacks. Students from the school reportedly seized and vandalized Iguala’s city hall in June 2013, according to the Wall Street Journal, and have clashed with police there before. “They practically destroyed the building,” an Iguala city councilman told the Journal. “That’s what these boys do. They cause trouble.” The Journal added that the attacks could also have come about as the students were commandeering the buses; police could have feared that the students were going to disrupt a political rally organized by the mayor’s wife set for the same evening.

But what about the cops who led the assault on the students?
Four days after the attack, the state government charged 22 municipal police officers with murder, according to the Guardian, but many more might have been involved. Corruption among Mexican police is a well-covered issue, but this situation reflects how things have reached a whole new level. Ioan Grillo, a veteran reporter who has covered narco crime in Mexico for more than a decade, wrote in the New York Times that this was something new: “As I inhaled the stench of death on that hill, and saw photos of the mutilated student on the road, I felt as never before that I was covering an act of pure unadulterated evil.”

Grillo explained that while the slaughtering of students may “seem inexplicable,” the truth is that drug cartels have taken over so completely that they either control government officials or are themselves the government officials. “Being ruled by corrupt and self-interested politicians can be bad,” Grillo wrote. “But imagine being ruled by sociopathic gangsters. They respond to rowdy students in the only way they understand: with extreme violence designed to cause terror. They stick the mutilated body of a student on public display in the same way they do rival traffickers.”

After the attacks, the federal government took away the local police force’s power and brought in hundreds of its own cops.

Which cartel is behind the violence?
The working theory is that Guerreros Unidos (Warriors United) got the police to attack the students, mounted the attack themselves, or worked directly with police. According to Grillo, Guerreros Unidos is a cartel fighting to control a strategic drug transport area packed with marijuana and opium fields. The cartel operates valuable drug corridors in Guerrero and Morelos, the state immediately to the northeast, according to the Independent.

Guerrero is home to the largest mass grave ever found in Mexico: In 2010, authorities discovered more than 60 people who had been bound and gagged and thrown down a mine shaft.

It’s hard to stay on top of the ever-evolving Mexican cartel breakdown, but here’s what we know: Guerreros Unidos was formed in 2009 after breaking away from the Beltrán Leyva Organization (BLO) following Arturo Beltrán Leyva’s death. According to InSight Crime, a foundation that studies organized crime in the Americas, Guerreros Unidos is in a bitter turf war with Los Rojos (also an offshoot of the BLO) and the Knights Templar (a separate cartel) for control of the area’s drug routes. The BBC has reported that the turf battle has taken a bite out of drug profits, so the cartel also makes money from kidnapping, extortion, and collecting fees.

The cartel’s extracurricular activities have put it in the crosshairs of the federal government, which, under President Enrique Peña Nieto, has been trying to look like it’s taking on the country’s most powerful cartels. The drug wars between the cartels and the Mexican federal government had apparently gotten quieter in recent times because, as the Washington Post notes, “the gore, it seems, was bad for business.”

That pressure may have also led one of the leaders of Guerreros Unidos, Benjamín Mondragón Pereda, to kill himself earlier this week after being surrounded by police. Iguala’s mayor and police chief, both suspected of working closely with the cartel, are on the run.

What happened with the unearthing of the mass grave?
When word came after the students’ disappearance that there was a mass grave found nearby, it seemed reasonable that it was the final resting place for the bodies. But yesterday Mexican authorities announced that none of the 28 bodies belonged to any of the students. As the Post reported after the announcement, the news brought fresh hope for families that the students may still be alive, but “to the rest of Mexico, the news that 28 mutilated, charred corpses correspond to another group of victims is a new stop on a carousel of horrors.”

There are at least eight more burial sites in just that area, the Post noted, and it’s possible the students are in one or more of them. (The Post notes that authorities haven’t said how many dead have been recovered, or who the bodies might be.) In fact, Guerrero is home to the largest mass grave ever found in Mexico: In 2010, authorities discovered more than 60 people who had been bound and gagged, some dismembered and decapitated, and thrown down a mine ventilation shaft.

So what’s next?
The disappearance and likely murder of the college students has led to mass protests across the country, with Mexicans once again arguing that the government isn’t doing enough to protect them. In Chilpancingo, the state capital of Guerrero, protesters have burned government buildings and demanded the resignation of the state’s governor. Meanwhile, the federal government has said it will continue to search for the students and try to identify the bodies found in the additional burial sites.

UPDATE, Wednesday, October 22, 2014: Iguala Mayor Jose Luis Abarca and his wife, Maria de los Angeles Pineda, may have ordered the students to be stopped on the night of their disapperance, according to Jesus Murillo Karam, Mexico’s attorney general. After the mayor ordered the students stopped and detained by police, the police handed them over to Guerreros Unidos, Karam said Wednesday, and the students haven’t been seen since.