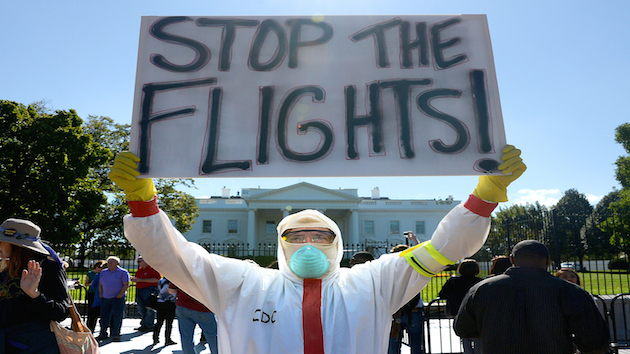 As President Barack Obama noted in his weekly address Saturday, Ebola is a serious public health issue. But the level of paranoia that has surfaced across the country since Thomas Duncan became the first patient diagnosed with the disease in the United States is not only unwarranted—it’s  dangerous. Ripped straight from the headlines, here are just five of the more surreal incidents of Ebola panic.

Syracuse University disinvites photographer. Ebola has an incubation period of up to three weeks. If someone hasn’t gotten sick within 21 days of exposure, they’re in the clear. But News Photographer magazine reported last week that “three-time Pulitzer Prize-winning photojournalist Michel du Cille of The Washington Post, who returned from covering the Ebola crisis in Liberia 21 days ago and who is symptom free, was asked by Syracuse University officials today not to come to campus, where he was scheduled to participate in a journalism program.” Cille was not pleased:

Maine teacher put on leave after traveling to Dallas. “A teacher at Strong Elementary School was placed on a 21-day paid leave of absence after parents told the school board they were concerned that she might have been exposed to Ebola during a trip to Dallas for an educational conference,” the Portland Press Herald recently reported. Dallas, where Duncan’s case was first diagnosed, is a city of 1.25 million. Five million people travel to and from Dallas every month.

Rwandan students kept home from New Jersey elementary school. Two students who moved from Rwanda—where there have been zero cases of Ebola—are being kept home from school in Burlington County, New Jersey, for 21 days in response to concerns from parents. Rwanda “is about 2,600 miles away from the closest affected country in West Africa,” notes Philadelphia’s local Fox station. “That’s about as close as Seattle, Washington, is to Philadelphia. But for some parents it really doesn’t matter.”

Texas college rejects applicants from Ebola-free Nigeria. Officials at Navarro College in Texas cited Ebola as a basis for refusing admission to two Nigerian students. Nigeria has been extraordinarily effective in fighting its recent outbreak, which included just 20 confirmed cases—so extraordinary, in fact, that as of today, the World’s Health Organization officially declared the country Ebola-free. After the media caught wind of the story, an official from Navarro pushed back against “misinformation” by saying that the college is focusing on students from China and Indonesia for the next year.

There’s much, much more out there, but we leave you with this note from Bloomberg’s Gabriel Snyder.