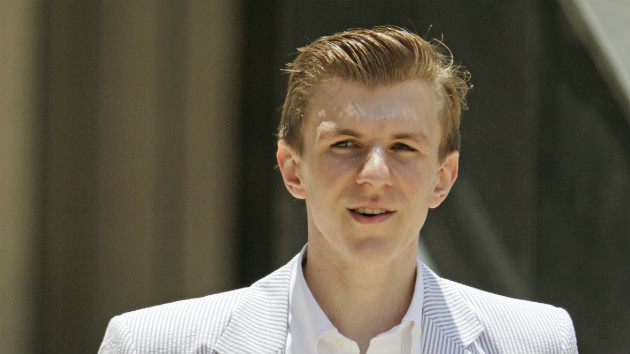 James O’Keefe, the conservative provocateur, has been on the prowl in Colorado, the setting of a close Senate race between Democratic incumbent Mark Udall and GOP Rep. Cory Gardner, as well as a nip-and-tuck governor’s contest. Last week, O’Keefe and two of his collaborators tried to bait Democratic field staffers into approving voter fraud involving Colorado’s universal vote-by-mail program, according to three Democratic staffers who interacted with O’Keefe or his colleagues.

Democratic staffers in Colorado recently came to believe they were the subject of an O’Keefe operation after campaign workers became suspicious about would-be volunteers who had asked about filling out and submitting mail-in ballots for others. Recently, the 30-year-old O’Keefe has targeted the Senate campaigns of Arkansas Democrat Mark Pryor and Kentucky Democrat Alison Lundergan Grimes by filming undercover videos of staffers or the candidate.

Last Tuesday, a man who appeared to be in his 20s showed up at a Democratic field office in Boulder wanting to volunteer to help elect Udall and Rep. Jared Polis (D-Colo.), according to a Democratic staffer who met with him and asked not to be identified. The man introduced himself as “Nick Davis,” and he said he was a University of Colorado-Boulder student and LGBT activist involved with a student group called Rocky Mountain Vote Pride. Davis mentioned polls showing the race between Udall and Gardner was tight, and he asked the staffer if he should fill out and mail in ballots for other college students who had moved away but still received mail on campus. The Democratic staffer says he told Davis that doing this would be voter fraud and that he should not do it.

On Friday, Udall campaigned with Sen. Elizabeth Warren (D-Mass.) on the University of Colorado-Boulder campus. After the event, a woman calling herself “Bonnie” approached a different staffer and, according to this staffer’s boss, asked whether she could fill out and submit blank ballots found in a garbage can. The staffer, according to her boss, said that she told her no.

That same day, the guy identifying himself as “Nick Davis” returned to the Democratic office in Boulder. He was accompanied by a man wearing heavy makeup and a mustache, according to the Democratic staffer who had met Davis three days earlier. Davis introduced his friend as a “civics professor” at the University of Colorado-Boulder and the faculty adviser to Rocky Mountain Vote Pride. Davis and the professor, who said his name was “John Miller,” picked up Udall campaign literature and canvassing information.

On Monday, O’Keefe tweeted a photo of himself with a mustache and said he’d recently posed as a “45yo” for one of his “election investigations.”

Only time for 2-3 more election investigations. I went in Disguised as 45yo, this time people may lose their jobs pic.twitter.com/ihuTjpierm

The repeated questions about submitting other people’s ballots led Democratic staffers to suspect they were being targeted. Later, the staffers viewed photos of O’Keefe—including one taken in Colorado showing O’Keefe sans mustache and sporting a Udall campaign sticker and a Women for Udall button—and they concluded that O’Keefe and the college professor were the same person. They also said the image O’Keefe tweeted of himself with a mustache matched the man who visited the Boulder office on Friday.

O’Keefe and two male colleagues also targeted a progressive nonprofit named New Era Colorado, according to New Era executive director Steve Fenberg. On Saturday, Fenberg says, O’Keefe and his friends contacted New Era’s Fort Collins office to set up an in-person meeting and identified themselves as activists affiliated with Rocky Mountain Vote Pride. The three men arrived carrying Udall campaign literature, Fenberg notes, but a New Era organizer met them outside the office’s front door and refused to let them enter with the Udall materials. Outside groups such as New Era cannot coordinate with political campaigns, and Fenberg says he believes O’Keefe and his collaborators “were trying to establish evidence we were working together.” 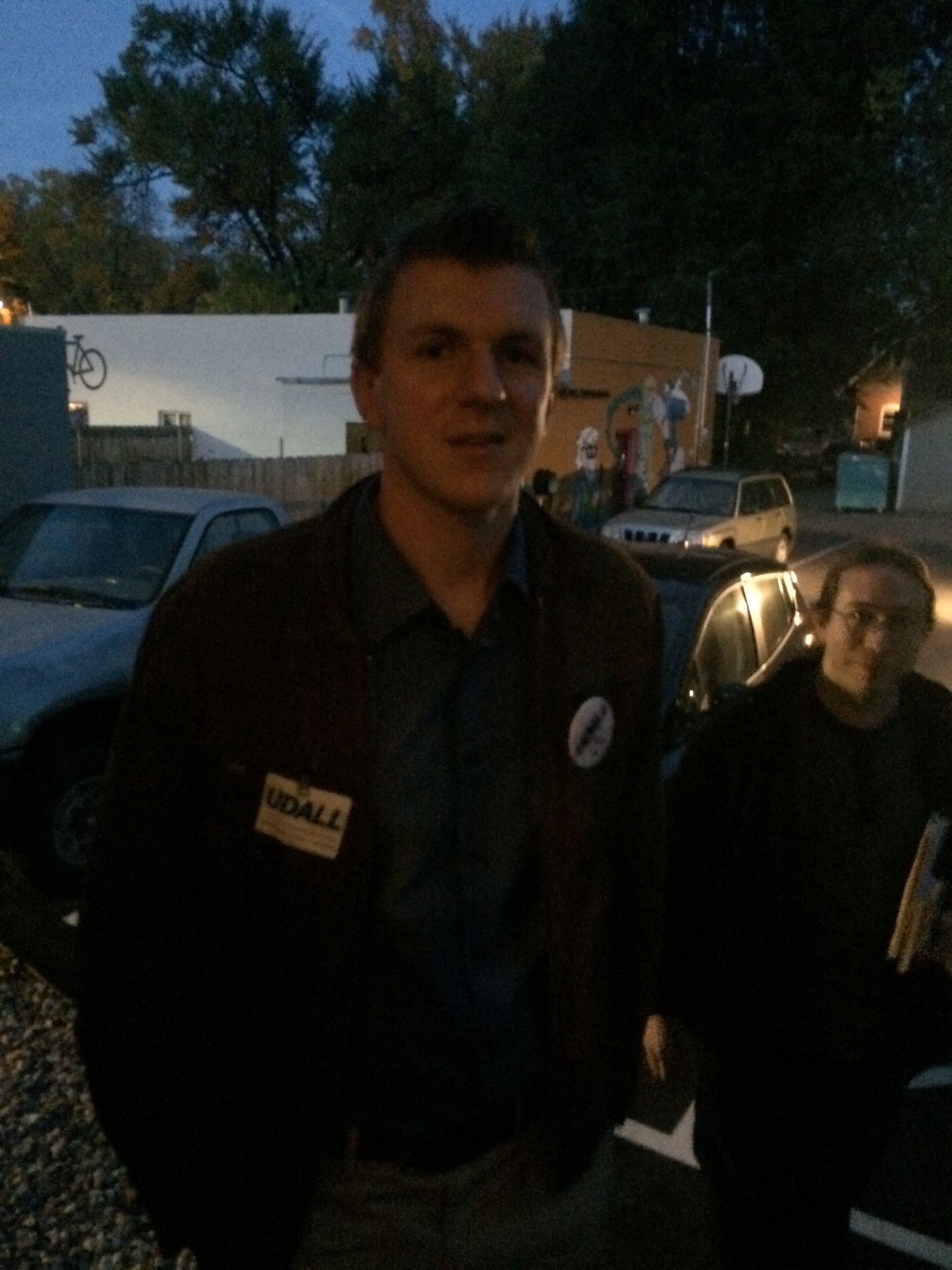 James O’Keefe and one of his collaborators

When New Era’s staffers began taking pictures of O’Keefe (including the photo embedded at left), Fenberg says, O’Keefe and a colleague went to their car and returned with a large video camera and a microphone. “If you want to take photos of us, we’ll take photos of you,” O’Keefe said, according to Fenberg, and the New Era staffers closed the door while O’Keefe and his friend tried to push it open and stick their microphone inside. Fenberg says New Era filed a police report about the incident.

Rocky Mountain Vote Pride doesn’t seem to have much of a footprint. There is a website and Facebook page for the organization, both created in July, but they provide no information about who’s behind the group. Searches for Rocky Mountain Vote Pride in the University of Colorado-Boulder student newspaper, the Denver Post, and the Boulder Daily Camera turned up no results. A search of Nexis archives for the past two years yielded zero mentions.

Chris Harris, the communications director for the Udall campaign, accused O’Keefe of “using sleazy, deceptive tactics to undermine the public’s trust in democracy.”

O’Keefe is best known for his undercover videos attacking the community organizing group ACORN. Those videos, hyped by Fox News and the conservative blogosphere, led the GOP-led House of Representatives to hold more than a dozen votes to defund ACORN, and the group disbanded soon after. In 2010, the FBI arrested O’Keefe and three others for phone tampering at a New Orleans office of Sen. Mary Landrieu (D-La.). He was sentenced to 100 hours of community service and three years of probation and fined $1,500.

This fall, O’Keefe’s group, Project Veritas, launched a political offshoot with its sights set on high-profile campaigns and organizations. Project Veritas went undercover to try to get campaign staffers for Kentucky’s Alison Lundergan Grimes to contradict the candidate’s pro-coal message. In Arkansas, O’Keefe’s group secretly filmed Sen. Mark Pryor speaking to a local LGBT group in an attempt to expose him as privately supporting marriage equality, which he has publicly opposed. Project Veritas also sought to bait workers for Battleground Texas, the group formed by Obama campaign alums to register and organize Democratic voters, into taking improper actions, but a Texas special prosecutor dismissed the group’s video as “little more than a canard and political disinformation.”

Neither New Era nor the Udall campaign was aware of any other contacts by staff with O’Keefe or his colleagues, and it was not clear whether other organizations in Colorado might have been contacted. Stephen Gordon, a spokesman for Project Veritas, declined to comment. “We’re not making any comment on potential operations in Colorado at this moment,” he said. “But watch for our upcoming videos.”