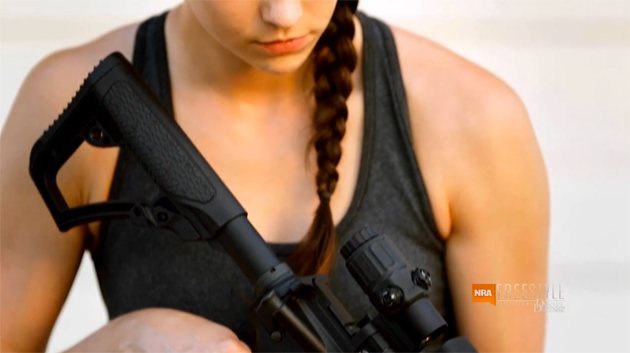 Screen shot from the NRA video "Beauty Shots." (<a href="#beautyshots">Watch it below</a>.)

Recently the National Rifle Association has aimed to boost its appeal among women. Last year it launched its “new and improved” NRA Women’s TV Network, and it has hired several accomplished female gun enthusiasts as official NRA News commentators. Women were a focus at its annual meeting in April, and next month the NRA will host a Women’s Leadership Forum Executive Summit, which promises to “celebrate the role of women as powerful leaders.”

But for women who oppose the NRA, it’s a different story.

In the latest issue of its flagship magazine, America’s 1st Freedom, the NRA targets Shannon Watts, founder of the group Moms Demand Action for Gun Sense in America, with an article that has been widely criticized as sexist for how it addresses her career and family life. Other recent NRA content seems to be doing the gun lobby no favors with women either, including videos that liken assault rifles to “hot women,” and commentary about sexual assault on college campuses that veers into victim blaming.

The premise of the lengthy article attacking Watts, authored by conservative legal scholar and gun rights lobbyist Dave Kopel, is that she is a fraud—an operative fronting a political group, rather than the homemaker turned grassroots activist she says she is. The art spread for the piece depicts Watts as a paper doll figure in high heels, with a 1950s-style kitchen apron and domestic accessories including a feather duster, iron, sponge, and spatula. 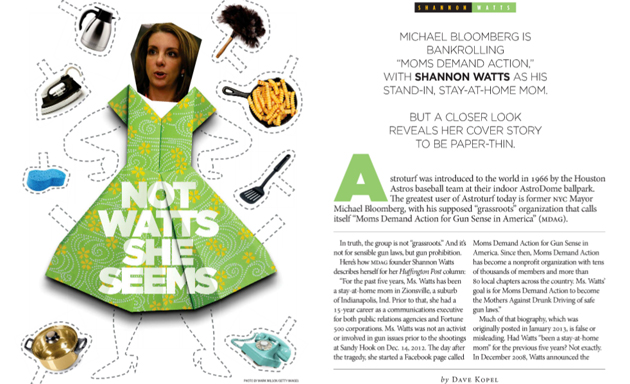 From the September 2014 issue of America’s 1st Freedom

Watts started Moms Demand Action after the Sandy Hook massacre in December 2012; a mother of five, she’d left her position as a corporate PR executive four years earlier to do consulting from her suburban Indianapolis home. But a woman with Watts’ career success, Kopel proposes, can’t possibly be a real stay-at-home mom. “The registered address for her PR firm was a residence, so presumably she was running her PR firm out of her house,” he writes. “Her children were all well into school-age or older, so it’s likely that she had plenty of time to run her business during the day.” Kopel also notes that in 2010 Watts and her husband had opened an art gallery. “There’s nothing wrong with that, except ‘running a streetfront art gallery plus public relations business from my house’ is not the impression conveyed by ‘stay-at-home mom.'”

The article digresses into familiar points of debate between the gun lobby and the gun violence prevention movement—what constitutes an “assault weapon,” how often good guys with guns really stop bad guys, and so forth. But its core message is clear, with Kopel concluding that “the willfully gullible media persist in portraying [Moms Demand Action] as an authentic social movement and Watts as a homemaker who just decided to do something about guns.”

How are other NRA commentators talking about women? One of its radio hosts criticized recent efforts to combat sexual assault on college campuses as “beyond political correctness.”

With the impact that Moms Demand Action has made on the national debate, it’s unsurprising to see the NRA go after Watts. Yet the magazine piece “is a strange tactic,” Watts says. “They’re courting women as customers, but at the same time they’re degrading women and mothers,” she told me. “For some reason the NRA thinks it’s the arbiter of what makes a good mom, or a real stay-at-home mom, which has nothing to do with guns or gun safety.”

Kopel stands by his skepticism that Watts was a stay-at-home mom “at least according to the dictionary definitions,” he told me in an email, citing the term from the Merriam-Webster and MacMillan dictionaries. “Nothing in my article disapproved of women or men being PR professionals or stay-at-home parents,” he added. Kopel also noted that he was not involved in creating the art for the piece.

The editor in chief of America’s 1st Freedom, Mark Chesnut, did not respond to my requests for comment, nor did Andrew Arulanandam, the NRA’s director of public affairs.

The implication of the article was not lost on a certain segment of the NRA’s audience. Shortly after it was published, America’s 1st Freedom promoted a piece on its Facebook page about Moms Demand Action “desperately bullying Kroger” over that company’s gun policy. One commenter responded: “‘Moms Demand Action’ more like fat housewives that need to get a good dicking and get their ass back in the kitchen.”

“Women are generally idiots,” said another.

“Somebody needs to point out to these bitches that people who legally buy guns are not the ones going out and committing crimes,” said another.

“They need to change their name to everyday nagging wives,” said another. “That’s all they do. Seriously annoying.”

In a recent in-depth profile of the group, I detailed how Watts created a Facebook page the day after Sandy Hook and quickly attracted supporters from all over the country. I met with and interviewed more than a dozen of the organization’s leaders, from states including Texas, North Carolina, Kentucky, Colorado, Michigan, and Washington. Many are working moms. Several are gun owners. One is a former cop.

“What the NRA fails to grasp is that mothers are allowed to be multi-dimensional,” a working mom who blogs under the handle Mary Tyler Mom wrote in response to Kopel’s piece. “We are allowed to be competent care providers and homemakers and still hella talented as gun safety advocates.”

Other recent commentary from NRA media personalities may also register poorly with women. Earlier this month, NRA radio host Cam Edwards spoke with Washington Examiner opinion writer Ashe Schow about how colleges and universities have gotten too aggressive in dealing with sexual assault on campus, suggesting that they are “encouraging victimhood” and going after male students unfairly. “It’s beyond political correctness,” Edwards said.

“So many of these cases,” Schow said, “come down to two people being drunk at a party hooking up, and then somebody, usually the girl, regretting it the next morning.”

The NRA also rolled out two videos this summer fantasizing about attractive young women as, literally, assault rifles. A video titled “Beauty Shots,” from NRA News commentator Colion Noir, “personifies one of his favorite firearms in female form.” His voiceover describes an alluring, adventurous woman as she poses in workout gear, swims in a pool, and gazes intently into the camera; at the climax of the video Noir declares, “She is: Daniel Defense M4-A1.” To some the video was simply a head-scratcher, but it also drew rebuke, not least for debuting just three days after a heavily armed college student committed mass murder in Santa Barbara, driven by his rage at attractive young women.

Noir discussed a similar video he made, released a couple of weeks later, with fellow NRA personalities Amy Robbins and Darren Lasorte, on the set of his show. “The HK MR556 is that gun,” Noir says, “like that girl who’s unbelievably attractive, she has this presence about her that seems untouchable and she’s not apologetic about her beauty.”

“I like the comparison with the woman—the hot woman—but explain a little bit more please,” Lasorte says.

“The MR566 is one of those guns…it’s very easy to hate it,” Noir says, “because it’s unapologetically what it is. It’s heavy, it’s expensive as hell.”

Robbins covers her face with her hands, all three of them now laughing. “But you still want to have fun with them,” Lasorte adds, “and they’re a little dangerous!”

Between this kind of content and the more familiar fear-based messaging that NRA executive vice president Wayne LaPierre is using for the homestretch of the 2014 election season, it’s unclear whether the NRA has an overarching media strategy. But the challenge it faces with bringing women into the fold remains evident. Over the last several years the roughly 70,000 supporters it says attend its annual convention have been more than 80 percent male, despite a NRA marketing director hyping an expected jump in female attendance this year. (It remained unchanged, according to the NRA’s own review.) The most reliable national surveys show that household gun ownership is in decline, with male gun owners outnumbering females by a 3-1 margin.

But it’s not just that women aren’t big customers. When it comes to the major political issues like universal background checks for gun buyers, polls consistently show that women of all political stripes overwhelmingly disagree with the NRA. It’s hard to see how some of the NRA’s latest efforts will win many of them over.