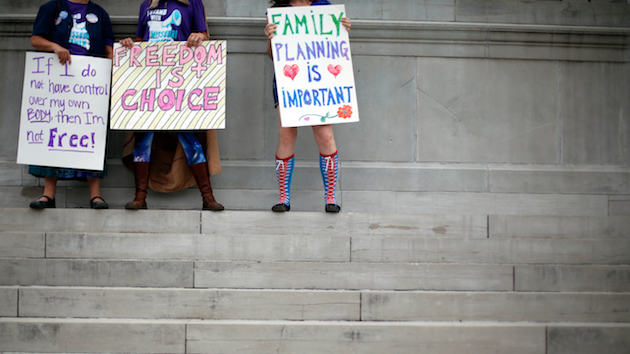 In the hours before Missouri Republicans overrode Democratic Gov. Jay Nixon’s veto and passed one of the harshest abortion bills in the country, a handful of Republican women—party activists, a local officeholder, and operatives who support abortion rights—drove to Jefferson City and begged lawmakers to reconsider. When cornered, some GOP lawmakers made a confession. “They said, ‘I don’t actually want to vote for this bill,'” recalls Linda Rallo, an alderwoman who led the team that buttonholed Republicans. “‘But if it comes to the floor, I’m going to vote for it.'”

Republican state Rep. Chris Molendorp, who opposed the bill, heard similar admissions from his GOP colleagues. In a closed-door meeting of the Republican caucus before the vote, Molendorp argued that the bill most of his colleagues were about to vote for was unreasonably cruel. The bill creates a three-day abortion waiting period, the longest in the country, with no exception for rape or incest victims.

“We have gone beyond concern for the life of the unborn and we’ve become punitive against the expectant mother.”

“My fear that I expressed is that we have gone beyond concern for the life of the unborn and we’ve become punitive against the expectant mother,” he says. Molendorp, who has an 85 percent approval rating from Missouri Right to Life, says that several women legislators who represent Missouri’s suburbs approached him privately to say they agreed with him—but they felt they had no choice but to vote for the bill.

The waiting period became law on Wednesday. Nearly every Republican and many Democrats in both houses of the state Legislature voted to overturn Nixon’s veto. But Republicans’ private apprehensions about the bill show that in a state like Missouri—which has more abortion restrictions on the books than almost any other state—not every legislator who votes for bills like these necessarily votes his or her conscience.

Rallo fears this bill identifies the GOP with a “Todd Akin agenda.” “It makes it harder for moderate candidates to get broad, statewide support,” she says. “And a lot of women like me are feeling like there’s not place for them in the Republican Party…They take our money and our time but they don’t want our opinion.”

Rallo, an alderwoman in the St. Louis suburb of Town and Country, has Republican bona fides. She served for six years as legislative assistant to a House Republican, ran a Republican’s statewide campaign for treasurer, hosts fundraisers for Republicans running for the Legislature, and has donated thousands of dollars to state GOP candidates.

She wasn’t alone in her effort to change GOP lawmakers’ minds before the vote—Christine Doyle Luhnow, another Missouri Republican activist, came to the state capital to help Rallo lobby. Doyle Luhnow previously ran media relations for the Missouri chapter of the Republican Leadership Council, a defunct political action committee for moderate Republicans founded by former Missouri Sen. John Danforth and former New Jersey Gov. Christine Todd Whitman. Both women have long-standing connections and fundraising ties to many of the lawmakers they met. “They’re not bad guys,” Doyle Luhnow says.

“Kurt gives the appearance of a forward-thinking man,” Rallo continues. “But he wants to run for attorney general and he’s worried about that primary.” Schaefer did not reply to requests for comment.

The day of the vote, Rallo recalls, she and Doyle Luhnow asked state Sen. Eric Schmitt, the majority caucus chair, if he would at least permit a symbolic filibuster. He smiled and breezed by. That night, Republicans invoked a procedural rule that hadn’t been used in years to stop Democratic state Sen. Jolie Justus from staging a filibuster.

“At least Wendy Davis was allowed to talk.”

“At least Wendy Davis was allowed to talk,” Doyle Luhnow says, referring to the Texas state legislator who mounted an all-night filibuster against an abortion bill before it eventually passed. Schmitt did not reply to requests for comment.

In May, after the GOP-controlled Legislature passed the three-day waiting period for the first time, Rallo met privately with two House representatives and a senator from St. Louis County, all Republicans. All three legislators said they understood her concerns, Rallo recalls, but that laws like this are necessary to help certain members of their caucus win primaries. “Every single one of them said to me, ‘I’m pro-life, but I didn’t come to Jefferson City to advance this style of legislation,” Rallo says. “‘These aren’t the bills I like voting for, but I have to.'”

Missouri joins Utah and South Dakota as the only states to mandate an abortion waiting period of 72 hours. Republican Rep. Kevin Elmer, who sponsored the bill in the House, told Mother Jones last week that he didn’t feel a waiting period of three days was a burden on women.

But Molendorp, who is leaving the Legislature this year to run a small health care nonprofit, says any reasonable person would see the bill is over the top—and that piling on abortion restrictions would eventually backfire for Republicans.