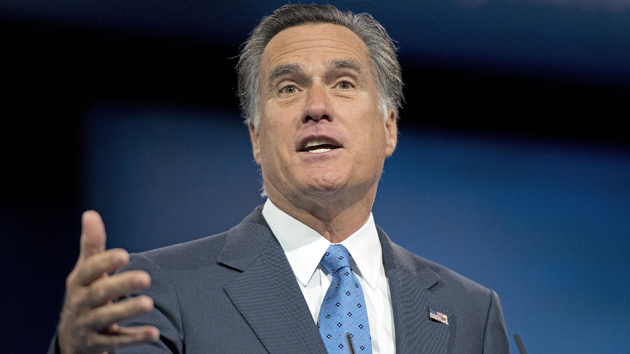 During a recent sit-down with the New York Times‘ Mark Leibovich, the former GOP presidential nominee—who seems to be almost flirting with the possibility that he just might consider pondering a presidential run in 2016, maybe—took yet one more stab at explaining the comments that put his political career in jeopardy. And this time he’s blaming the rich guy who posed the question.

But first, let’s look at Romney’s evolving explanations for why he told a private gathering of $50,000-or-more donors that nearly half of Americans believe “they are victims, who believe the government has a responsibility to care for them” and that “my job is is not to worry about those people. I’ll never convince them they should take personal responsibility and care for their lives.”

Hours after Mother Jones broke that story, the Romney campaign issued a statement that attempted to change the subject:

Mitt Romney wants to help all Americans struggling in the Obama economy. As the governor has made clear all year, he is concerned about the growing number of people who are dependent on the federal government, including the record number of people who are on food stamps, nearly one in six Americans in poverty, and the 23 million Americans who are struggling to find work. Mitt Romney’s plan creates 12 million new jobs in four years, grows the economy and moves Americans off of government dependency and into jobs.

That response—which did not address what he had said—did nothing to stop the media firestorm underway. So later that night, Romney tried again. In a hastily arranged press conference, he stood by his remarks. “This is the same message I give to people,” Romney noted. But he did acknowledge some verbal clumsiness: “It’s not elegantly stated, let me put it that way. I’m speaking off the cuff in response to a question and, I’m sure I can say it more clearly.”

But this explanation, too, did not squelch the issue. Two weeks later, Romney tried once more. On Fox News, he told Sean Hannity:

Attempting to put the 47 percent rant behind him, Romney, who had initially insisted this comment, though inelegantly stated, had reflected what he believed, now was telling voters he had been wrong. It was almost as if he was, well, apologizing.

Months after Romney lost the election, he was still in quasi-apology mode. Appearing on—where else?—Fox News in March 2013, he was asked by Chris Wallace about the impact of his infamous comment. Here’s the exchange:

Romney: Yes, it was a very unfortunate statement that I made. It’s not what I meant. I didn’t express myself as I wished I would have. You know, when you speak in private, you don’t spend as much time thinking about how something could be twisted and distorted and—and it could come out wrong and be used. But, you know, I did. And it was very harmful. What I said is not what I believe. Obviously, my whole campaign—my whole life has been devoted to helping people, all of the people. I care about all the people of the country. But that hurt. There’s no question that hurt and did real damage to my campaign.

Romney was almost taking responsibility for having said something that was wrong and harmful—but he still suggested that his comment had been “twisted and distorted” and “used” by his political foes and critics. Clearly, he was still struggling with how to come to terms with those fateful 67 seconds at that Boca Raton fundraiser. He could not fully own the remarks.

Four months later, he had another—and different—account. In an interview with the Washington Post‘s Dan Balz, Romney resorted to awkward acrobatics. First, he said he had bungled the initial response to the story because he was in California and hadn’t seen the video: “As I understood it, and as [my advisers] described it to me, not having heard it, it was saying, ‘Look, the Democrats have 47 percent, we’ve got 45 percent, my job is to get the people in the middle, and I’ve got to get the people in the middle.” That’s hard to buy. Neither he nor his advisers actually watched the video—or read the stories quoting from it—before the campaign issued a statement?

Romney then told Balz the remark had been yanked out of context by President Barack Obama and others: “The president said he’s writing off 47 percent of Americans and so forth. And that wasn’t at all what was intended. That wasn’t what was meant by it. That is the way it was perceived.” Not even a quasi-apology or admission of wrongdoing at this point.

Balz responded: “But when you said there are 47 percent who won’t take personal responsibility—.” Romney interrupted, “Actually, I didn’t say that…That’s how it began to be perceived, and so I had to ultimately respond to the perception, because perception is reality.” But Romney had in fact told those donors, “I’ll never convince them they should take personal responsibility and care for their lives.” In this interview, he resorted to spin and denial.

Now Romney has gone further in denying responsibility for the remark, blaming the 47 percent fiasco on the fellow who tossed him the question. Here’s the relevant excerpt from Leibovich’s piece:

“I was talking to one of my political advisers,” Romney continued, “and I said: ‘If I had to do this again, I’d insist that you literally had a camera on me at all times”—essentially employing his own tracker, as opposition researchers call them. “I want to be reminded that this is not off the cuff.” This, as he saw it, was what got him in trouble at that Boca Raton fund-raiser, when Romney told the crowd he was writing off the 47 percent of the electorate that supported Obama (a.k.a. “those people”; “victims” who take no “personal responsibility”). Romney told me that the statement came out wrong, because it was an attempt to placate a rambling supporter who was saying that Obama voters were essentially deadbeats.

“My mistake was that I was speaking in a way that reflected back to the man,” Romney said. “If I had been able to see the camera, I would have remembered that I was talking to the whole world, not just the man.” I had never heard Romney say that he was prompted into the “47 percent” line by a ranting supporter.

Leibovich is right; this seems to be the first time Romney has tried to place responsibility for his comment on the person who asked him the question. That supporter was not rambling. Here’s what he asked: “For the last three years, all everybody’s been told is, ‘Don’t worry, we’ll take care of you.’ How are you going to do it, in two months before the elections, to convince everybody you’ve got to take care of yourself?” That was a straightforward query, succinctly put, not rambling at all. It was Romney who took the point to the next level and proclaimed that a specific number of Americans were lazy freeloaders who could not and would not fend for themselves.

To recap: Romney has gone from side-stepping the remark, to owning the thrust of this comment (though noting it was not well articulated), to saying he was wrong, to denying he said what he said (and contending his words were distorted), to claiming he was only mirroring the rambling remarks of a big-money backer. This last explanation is certainly not fair to the 1-percenter who merely expressed his very 1-percentish opinion. Does this mean that Romney was thrown off his game by a simple question—or that he was trying to suck up to a donor?

In the two years since Romney was caught on tape, he just cannot come up with a clear explanation of an easy-to-understand short series of sentences that were responsive to the question presented. But there is one possible explanation he hasn’t yet put forward: He said what he believed.