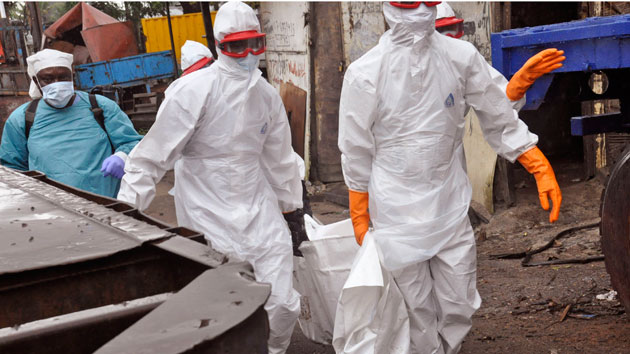 As of this week, the Ebola outbreak in West Africa is known to have infected more than 5,700 people and taken more than 2,700 lives. Yet those figures could be dwarfed in the coming months if the virus is left unchecked. On Tuesday, the Centers for Disease Control and Prevention reported that the total number of infections could reach 1.4 million in Liberia and Sierra Leone by January 2015. Though cases have been reported in five countries, nowhere has been harder hit than Liberia, where more than half of the Ebola-related deaths have occurred.

The outbreak has crippled Liberia’s economy. Its neighbors have sealed their borders and shipping has all but ceased, causing food and gas prices to skyrocket. Schools and businesses have closed down, and the country’s already meager health care system has been taxed to the breaking point. Meanwhile, as panic grips the country, crime has risen steadily and some reports suggest that Liberia’s security forces are among the perpetrators. To get a picture of how dire the situation is on the ground, we got in touch with Abel Welwean, a journalist and researcher who lives outside of Monrovia. He conducted a handful of interviews with Liberians in his neighborhood in the second week of September and also provided his own harrowing story of what life is like in the country.

The outbreak has forced many Liberians to stay indoors and avoid interacting with other people. Since the virus can be caught merely by touching the sweat of an infected person, once-common forms of physical contact, like handshakes, have become rarer.

Frances (a university student): Football has been suspended in our country. We are sitting at home just doing nothing—all in the name of protecting ourselves. It is hurting us, but we have to play the safe rules, because we value our own lives.

Abel: I don’t wear short sleeve shirts to step outside my house. I keep my children in my yard throughout the day. I make sure we wash our hands periodically. We do not shake hands with anybody outside of our house. We do not entertain visitors in our house… These behaviors are very strange amongst Liberians… Shaking hands is our one of the cultural values that we have. Liberia may be poor and not willing to be developed, but we are friendly people who believe in shaking hands in a special way, and eating together from the same bowl.

Frances: Schools are closed for time indefinite. We don’t know when schools will open. We are sitting at home, watching and praying that school will open sooner. Rumors are coming that schools will open next year— we don’t know. What I think the youth can do now is to get on our feet and educate the common man, those that are still in the denial stage, to sensitize them, give them the actual information about this Ebola virus, let the youth get on their feet from house to house, door to door, and try to inform the populace about the deadly Ebola virus, and how it can be prevented.

Abel: I worry a lot about the future of our children’s education. I was at the verge of paying my children’s tuition when the government announced the closure of all schools in the country. For now, I am my children’s tutor at home.

“We are urging the international community to come to our rescue, for the downtrodden, because pretty soon there will be another war, and that will be the hunger war.”

When the epidemic struck Liberia, a number of hospitals closed, often because their staffs had fled in fear. Adding to the problem, Ebola’s symptoms mimic other, still common diseases, but treating anything that resembles Ebola necessitates protective gear that’s not always available outside the quarantine centers. That means that many people who are suffering non-Ebola illnesses are going untreated.

Frances: Many were afraid that if you have malaria, you have common cold, you have fever, you go to the hospital, they would diagnose you as an Ebola patient… I even got sick during the outbreak. I was afraid to go to the hospital. I had to do my own medication, but God looked out for me. I’m well. But these were the messages that were going around, that once you have this, they will confine you to a place, they will quarantine you for 21 days, they will inject you. So many Liberians were afraid to go to hospitals. But now the message has spread out. We now know people are surviving of Ebola. Even if it is not Ebola, you just have malaria, you go there, you are treated. They get you tested; they release you on time.

Brooks (an American who was working at the Accountability Lab, an anti-corruption NGO, in Monrovia and has since left the country): Even in July, you heard stories of pregnant women going into labor, bleeding profusely, and not being tended do because people were afraid of Ebola.

Esther: As a midwife, most of the time I have to do deliveries. But right now, as we sit here, this clinic is closed. These are cases that could be treated, but since we don’t have the proper equipment, the proper outfits to wear and treat our patients and do tests [for Ebola], we decided to stay away from treating patients, because you don’t know who you are touching. Obviously, it’s a kind of embarrassment, but we have to go through with it for now.

Before it spread to Monrovia, Ebola struck in Lofa County, Liberia’s rice-producing center. Many farmers avoided their fields, severely hurting domestic food production. Food imports (the country imports about two-thirds of its grain supply) have also been hampered because of the crisis. Borders with neighboring countries have been closed, and shipping companies have avoided the nation’s ports. All of that has led to the biggest increases in food prices since the nation’s civil war, which ended in 2003. In a country where 84 percent of everyone lived on less than $1.25 per day in 2011, this shock has become its own crisis.

John (a Liberian employee of the International Committee of the Red Cross): I see so many people, sometimes they are walking to town [about six miles]. Even if they have money, they prefer walking a distance and saving the money to buy food so they will eat for the day. We tend to be afraid to assist someone from the vehicle, even to tell them the distance they are going, because we don’t know who is carrying the virus.

Lawrence (the Liberia country director for Accountability Lab): Hunger is really hitting the country… If the ships are not coming, [farmers] are not making rice, the stockpiles are depleted…the animals are eating the crops, what happens then? The production will decrease, the price will increase, and if you don’t have money, what is going to happen? Hunger is going to strike… This is a serious war, without bullets.

It’s not just a rise in food prices that Liberians are struggling with; transit costs have increased as well, partly because the government has forbidden commercial vehicles from carrying large numbers of people. Markets have been shut down; NGOs and companies are asking employees to stay at home; schools are closed so teachers are not working. On September 17, the World Bank warned that Ebola could cut Liberia’s GDP by 3.4 percentage points, costing $228 million by 2015.

Esther: In my own clinic, I have a staff of twelve. But right now, everybody has to be home until otherwise. Since we don’t have protective gear, we don’t have anything to work with, we cannot risk our own lives, because if you are not able to protect yourself, you will not able to work with other people. It will be difficult for their families.

Frances: It is better for us to stay at home, but we need, also, to have our daily bread. The international community, international donors, need to come to our rescue, because hunger is taking over Liberia, gradually.

Abel: I have gone out of job because of the Ebola outbreak. Before the outbreak, I had contracts with Princeton, PBS Frontline, Nursing For All, and the Gender Ministry. All of my contracts are on hold until the crisis is over.

The statistics are unreliable, but many report that violent crime is rising since the outbreak began. Even more troubling: some of these crimes have reportedly been at the hands of police and soldiers in uniform. Some Liberian’s blame the government’s curfew for the problem.

John: Armed robbery is increasing because the government placed this curfew from 9 [p.m.] to 6 AM. Before, there used to be community watch teams. At that time, there was no curfew.

Abel: Our lives were relatively peaceful before the deadly outbreak of the Ebola virus. We could go out any hour and return any hour. There were robberies once in a while, but not compared to the recent ones… I do not know if the proliferation of robberies was political or some criminals just decided to take advantage of the situation.

There have been numerous cases of armed robberies since the curfew was announced… There was one in my community and my neighbors were badly affected. I was really afraid that night when I heard the bullet sound. At that time my family and I were watching movie in the living room. We got scared so much that we couldn’t continue the movie. We turned the video off, turned all the lights in the rooms off and went to bed. Fortunately for me, those police officers that came to rescue my neighbors were my friends. They came to my house that night to see how my family and I were doing. [Later, I learned] the robbers wore police uniforms and were fully armed.

Esther: I was a victim about four days ago. I just left my back door open to hang clothes in the front. By the time I was back in, someone had snuck in and took the two phones I had charging. Because the children are not in school, most of the young ones are turning to crime—and not just the young ones, even people who were working and they are not able to work now, some of them are thinking, how do they maintain their families? They are collaborating with some of these criminals to get their way through.

Frances: Liberia is declining, the economy is declining, and things are just getting difficult on a daily basis. We are not free to move around, we are not free in our own country because of this deadly Ebola virus. We are urging the international community to come to our rescue, for the downtrodden, because pretty soon there will be another war, and that will be the hunger war.