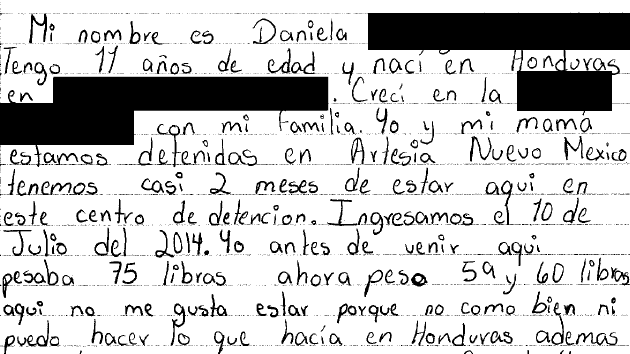 On Tuesday, the nation’s top immigration court allowed a Guatemalan woman who fled her abusive husband to petition for asylum in the United States. It’s a landmark ruling that immigrant rights advocates hope will protect women who have escaped horrific marital violence in countries besides Guatemala.

One of those women is a Honduran named Rosemary. In June, she entered the US with Daniela, her 11-year-old daughter, and both were detained near the border. Rosemary and Daniela are currently detained in a makeshift facility in Artesia, New Mexico, set up by the Department of Homeland Security. They are seeking asylum after fleeing Daniela’s father, who allegedly beat and choked Rosemary for three years before the two escaped. (Rosemary asked me to withhold their last name.)

And Tuesday’s ruling could be good news for the two of them—if they ever get out of detention. “It is very difficult to prepare a meaningful asylum case within a detention center,” their lawyer, Allegra Love, wrote to me in an email. “There is limited legal counsel and communication is nearly impossible.”

In less than two weeks, Rosemary and Daniela have a bond hearing. If the judge grants a low bond, the family will pay it and live with friends in Houston. But if it’s too high—or the judge denies them bail—then Rosemary has considered voluntarily going back to Honduras, where she claims her life is in danger.

Why would Rosemary risk heading back to one of the world’s most violent countries? According to a lawsuit filed by the ACLU and other immigrant rights groups, conditions in Artesia are terrible: The facility is overcrowded, privacy is nonexistent, and phone calls to family and attorneys are limited to two or three minutes. Daniela says she has lost 15 pounds in two months. “Her mother is not sure she wants to risk her child starving to death in New Mexico,” Love says.

So Love encouraged Daniela to write a letter to President Obama. Daniela did, and Love translated and shared with Mother Jones. Here’s an excerpt:

I don’t like being here because we don’t eat well, and I can’t do what I did in Honduras so I need to go back or get in school. I am a very intelligent girl. I can speak English and I am learning French, and I believe that all the kids who are here in this center should leave. No one wants to be here. We are getting sick mentally. The jail is affecting us. Some officials are very rude. President Obama, I am asking you to please help us leave here and stay in this country. While I have been here I’ve been sick two times. I ask you from my heart for your help.

Here’s a copy of Daniela’s letter and Love’s handwritten translation:

A copy of Rosemary’s affidavit to the court, which Love shared with Mother Jones, corroborates the basic details of her daughter’s letter.

In one sense, Rosemary and Daniela are lucky: Artesia is notorious for deporting migrants so swiftly that people with legitimate asylum claims never have a chance to file an application. The fact that the mother and daughter are in touch with a lawyer—they met Love through her pro bono work for the American Immigration Lawyers Association—sets them apart from thousands of other women who stream through Artesia every month. (The Department of Homeland Security did not reply to requests for comment.)

Their story also flies in the face of conservative claims that, following Tuesday’s decision, domestic violence victims can earn “instant US citizenship.” Their claim to asylum might have improved in the abstract—but there are still plenty of hurdles between Rosemary and Daniela and their first asylum hearing.