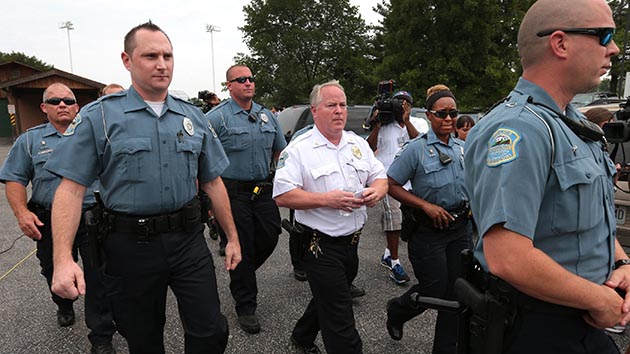 In 2009, police in Ferguson, Missouri, arrested Henry M. Davis on suspicion of driving under the influence and took him to jail. What followed is described in court documents as “physical contact between the officers and Mr. Davis.” One officer, Kim Tihen, allegedly “struck [Davis] in his head with a closed fist and hit [him] in the head with handcuffs.” Davis suffered a concussion and severe facial lacerations, while an officer was left with a broken nose. Afterwards, prosecutors charged Davis with four counts of destruction of property—because his blood had dirtied the officers’ uniforms.

Davis pleaded guilty to reduced charges and ended up moving to Mississippi. Officer Tihen, for her part, is no longer with the Ferguson Police Department. In 2012, after four years on the force, she won election to the city council, becoming one of the six-person body’s five white members. (The sixth is Latino.) Two-thirds of Ferguson’s residents are black, but the city holds elections in the spring, making for low turnout—in April 2012, when Tihen was elected, less than 9 percent of eligible voters went to the polls. (The Ferguson police force is even less representative of the city’s African American majority: Just 4 percent of its members are black.) Last week, after police cracked down on residents protesting the killing of Michael Brown, an unarmed teen, Tihen and the rest of the city council issued a statement calling on demonstrations to cease at dusk.

Davis’ alleged beating, first reported by the Daily Beast, has been cited as a particularly notorious episode in the history of the Ferguson Police Department. Some of the charges against him were flimsy—at the trial, one of the officers admitted that Davis never actually bled on Tihen’s uniform, and in fact that several other claims of bloodied uniforms were unsubstantiated. (Although an officer suffered a broken nose in the altercation, a later charge of felony assault against an officer was dropped).

At a deposition, Ferguson’s former police chief revealed that his staff did not keep records of incidents in which officers used force against citizens, so long as no one died; in other words, there was no way of telling how often incidents like Davis’ happened. Surveillance video of the jail was destroyed before the trial. Davis pleaded guilty to two of the four destruction-of-property counts and a handful of traffic violations. He paid $3,000 in damages. He also sued the officers, in a case that was dismissed but is being appealed.

Davis moved to Mississippi after the alleged assault and says he still struggles with his memory—a condition he blames on what happened that night at the Ferguson jail. “Kim Tihen—she was the one that was holding me up,” he said when I reached him Monday. “I was handcuffed laying on my stomach and she lifted me up like three-quarters off the ground.”

“They’re doing like they did me,” he said of the protests he’s watched from afar. “For the wrongdoing they’ve done, they’re trying to say that it’s the victim’s fault.”

Tihen did not respond to requests for comment. According to her official bio, her focus on the city council has been “crime prevention, fiscal responsibility, and increased communication between city officials and residents.”