Sen. Mitch McConnell (R-Ky.)—challenging the notion that Republicans are waging a war on women—recently told a group of Kentuckians that gender discrimination in the workplace is a thing of the past. “I could be wrong, but most of the barriers have been lowered,” McConnell said while visiting a small business in Buckner, Kentucky. “Women voters will look at the same issues as men are.” His remarks were recorded and reported by a local newspaper, the Oldham Era.

Speaking last Thursday at Fastline Publications, which produces farm equipment catalogs, McConnell, who’s in a tough reelection fight against Democrat Alison Lundergan Grimes, cited the prevalence of female CEOs as evidence that women are thriving within corporate America. “We’ve come a long way in pay equity, and there are a ton of women CEOs now running major companies,” McConnell said.

“I don’t grant the assumption that we need to sort of give preferential treatment to the majority of our population, which is, in my view, leading and performing,” McConnell said, referring to women in the workplace. He added, “Maybe I’m missing something here.” Noting that Grimes was claiming that McConnell has promoted “policies that are harmful to women,” he criticized her for pursuing an agenda of “exploitation for political purposes.” He asserted that Grimes was trying “to convince people that women should vote for her because she’s a woman.” He noted that the last time he ran for reelection, he won 50 percent of women.

McConnell’s facts are off. Women have had greater success in recent years in reaching the top-tier of corporate America, with a record number of women leading Fortune 500 companies this year. But that number is still small. Of the top 500 corporate CEOs, just 24—4.8 percent—are women. That’s hardly representative of the American public given that, as McConnell noted, women make up more than half of the population. Moreover, in 2013, women held just 16.9 percent of board slots at Fortune 500 companies, according to a study by Catalyst, a nonprofit that tracks gender trends in employment. That same study found that 10 percent of Fortune 500 companies didn’t have any female board members.

As for pay equity, Catalyst’s research shows that women represent only 8.1 percent of the top earner slots at major companies. The specific numbers are often debated, but the data shows that men tend to make more than women throughout the economy. Democrats contend that women earn 77 cents for every dollar pocketed by men, a figure calculated by comparing all full-time female workers to their male counterparts without taking into account differences in occupation. But when men and women in the same career field are compared, the men still come out on top, as shown by this chart from the Institute for Women’s Policy Research: 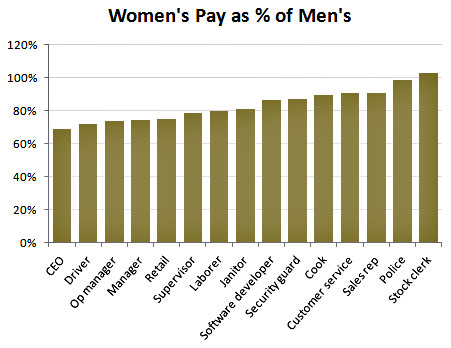 McConnell has repeatedly opposed measures designed to address the gender pay gap. He voted against the Democrats’ Paycheck Fairness Act in 2010, 2012, and this past April. In 2009, the Kentucky senator voted nay on the Lilly Ledbetter Act, a bill to give victims of wage discrimination more opportunities to sue their employers. That bill eventually became a law despite McConnell’s objections.