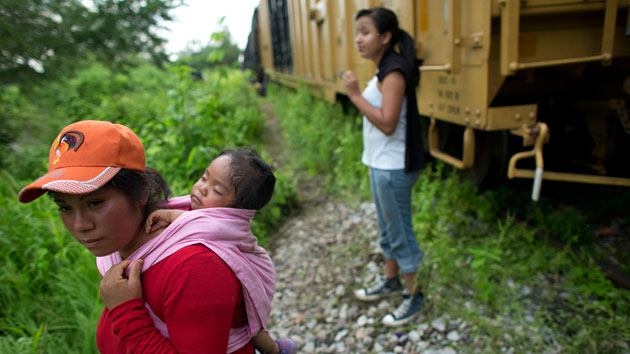 Guatemalan migrant Gladys Chinoy, 14, waits with more than 500 other migrants alongside a freight train in Chiapas, Mexico.Rebecca Blackwell/AP

Ever since unaccompanied child migrants became a national news story six weeks ago, many people have started asking: Is this an immigration crisis, or is it a refugee crisis? In response, the United Nations High Commissioner for Refugees said last week it wants to designate many of the Central Americans fleeing regional violence and gang extortion as refugees.

The announcement comes amid mounting evidence of the horrific conditions causing so many people to flee Honduras, El Salvador, and parts of Guatemala: kids escaping rape, gang recruitment, and murder all around them, as Pulitzer Prize-winning author Sonia Nazario detailed in a chilling op-ed in last Sunday’s New York Times. With this new designation, the UNHCR hopes to pressure the United States to give more immigrants, including many of the 70,000-plus unaccompanied minors likely to arrive at the US border this year, political asylum.

But if the UNHCR were to make such a move, it still would have no legal significance for the United States. So is it really that important? Yes and no, says Michelle Brané, director of migrant rights at the Women’s Refugee Commission. Brané and I talked about what a “refugee” designation could mean, and other ways the US can help ease the pain for immigrants—particularly those who’ve experienced targeted violence.

Here are nine key takeaways from our conversation:

1. Casting this as a “refugee situation” isn’t necessarily the important part.
“This population contains within it many children and mothers and parents bringing their children who qualify for refugee protection or for protection under international law. Whether you formally call it a ‘refugee situation’—that to me is less relevant than acknowledging that this is a population that is being driven out of their country. And their government is not willing or able to protect them.”

“Fifty-eight percent of the kids said, ‘I received a death threat’.”

2. It’s not just general violence and unrest that’s causing people to flee Central America and Mexico.
“It’s true that general conditions of war or of danger are not sufficient to qualify for asylum. But the UN agency of refugees, in interviewing 400 of these children, for over an hour each, they found that 58 percent expressed a targeted fear. Not just, ‘I was scared because my neighborhood was dangerous.’ Fifty-eight percent of the kids said, ‘I received a death threat.’ Or, ‘I had a body cut up in a plastic bag left on my doorstep as a warning.’ One hundred percent come from a dangerous place. That we know. But 58 percent were targeted. That’s the piece that people are not getting.”

3. Using gang violence as grounds for international protection is not a novel idea.
“The UN committee for refugees has recognized for many years now that gang violence absolutely qualifies, depending on the circumstances, as persecution and as qualifying for status under the refugee commission. And the US has granted many claims. People talk about this being difficult to do. It is difficult, especially if you don’t have an attorney. But children with attorneys requesting asylum are winning those cases. It’s absolutely a grounds that has been accepted in the US. It’s not something revolutionary.”

4. Yes, this is a crisis—but we shouldn’t throw our hands up.
“The numbers are small if you compare them to refugee situations worldwide. Like look at Syria. There’s over a million Syrian refugees in Turkey. There’s over 2 million Syrian refugees in Jordan. Those countries are tiny compared to the US, and the numbers are much bigger. It’s absolutely our responsibility as the United States to manage this and handle it in a way that does not roll back protections. We have been the ones to stand up there and say to Turkey:’ You’ve got to take these refugees’. For us to say, because of this small number, ‘Oh, maybe we’ll reconsider,’ is crazy. It’s absolutely manageable.”

5. Very few migrants are faking persecution in order to get to stay in the United States.
“The US has excellent asylum screening procedures. The problem is, you need to beef up the system in order to accommodate these numbers. But that’s something we need to do anyway. I know there’s been a lot of allegations and concern that it’s a system that can easily be gamed, and you can fake it—but it actually it’s quite a rigorous process. There’s several screening hurdles you have to get over, and then you have to go in front of a judge, and then there’s security clearance.”

6. And many of them migrate for multiple reasons.
“When people say they have family here, yes, that’s true. But that’s not what made them come entirely. Why are they coming now? A smuggler offered them passage to the US. Is the smuggler the reason you left? Part of it. But really, the reason you were looking for a way to come, again, goes back to the violence. Poverty, also. The majority of the kids coming also are experiencing poverty in their home country. Is that the main reason? Maybe, maybe not. It’s combined.

7. Requiring international protection, or refugee designation, for more migrants is the right start—but the US can’t solve this crisis alone.
“Mexico also has to acknowledge that many of these children need protection. Mexico also has very good asylum laws on the books. What they don’t have is the resources and the infrastructure to support implementing those policies. Frankly, I think one of the things the US should be doing, and could do if they talk about this in the context of a refugee crisis, is to provide support regionally, not just to Mexico but also to Belize, to Costa Rica, to Panama, all of the countries that are also seeing influxes of these children. Provide them with the support to implement their protection policies consistent with international law. And not all of these kids have to come to the US, right? The burden can sort of be shared in the region.”

8. We don’t have to wait to act until migrants get to our borders—we could process them before they leave their country.
“We’ve done that before: with the Vietnamese in the past, with Haitians, and with Cubans. The first thing that needs to happen is you have to set up what the criteria are going to be; who qualifies to be sort of preprocessed. You could limit it to kids with strong family connection to the US, who have been targeted and pass some sort of criteria. It can be done administratively. You do not need legislation to do that. And in doing it you basically cut out the smugglers. If you process the kids internally, they can get on a plane for $300 and fly over here—they don’t have to pay $3,000 to a criminal organization. It really undercuts the smugglers and trafficking operation in a huge way.

“If you process the kids [in their own country], they can get on a plane for $300 and fly over here—they don’t have to pay $3,000 to a criminal organization.”

“If children see there’s a legal way that’s safer to come—without taking this horrible journey—maybe they’ll wait a little bit. And at the same time, you’re building up the child welfare system and funding safehouses and anti-corruption campaigns. Maybe they’ll see things get a little bit better; I can wait, I don’t have to leave today. You slow the flow at that end. Not just by deporting people summarily, without a hearing. If you do that, and that’s all you do, they’re going to turn right around and come back.”

9. Even if Obama’s request for emergency supplemental funding to deal with this crisis isn’t perfect, it’s better than nothing.
“While we may not agree with all the details of where some of the money is going to—it’s sort of heavy on enforcement, in my view—there’s no question that they desperately need this money in order to be able manage the situation and get a handle on it. Frankly, it needs to go through. Blocking it will make the situation worse. They won’t have any place to hold these kids while they process them, they won’t have money to process them and deport them, and they won’t have money to put them on planes and send them back. So it’s crazy that there’s discussion about blocking it.”

UPDATE, 7/24/14: The Obama administration is considering a plan to screen Hondurans under the age of 21 in their home country to see if they qualify for asylum in the United States, the New York Times reports. As Michelle Brané points out in the interview above, this would allow the kids to apply for protection without making the dangerous crossing through Mexico or supporting human traffickers. If successful, the pilot program might also be adopted in El Salvador and Guatemala. That the administration is discussing such a measure helps legitimize that the Central American children migrating en masse are fleeing threats of imminent danger. According to an early draft proposal, 35 to 50 percent of Honduran applicants could be considered for asylum.