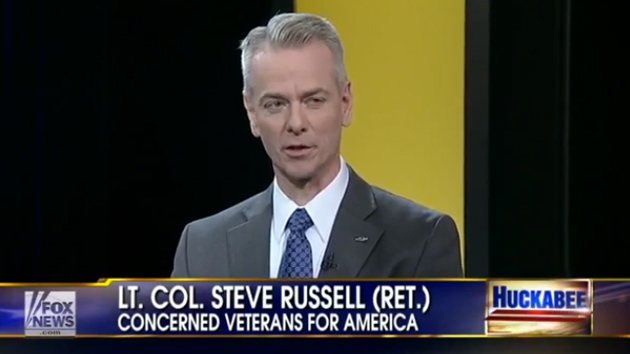 Steve Russell’s political career has largely been propelled by his Iraq War heroics. The retired Army Lt. Col., who’s vying in Tuesday’s Republican primary to run for the seat being vacated Rep. James Lankford (R-Okla.), led the battalion that hunted down and captured Saddam Hussein. After returning to civilian life, he barnstormed the country in support of a troop surge. He has also been one of the leading voices advancing the discredited claim that Iraq possessed an active weapons of mass destruction program at the time of the US invasion in 2003.

“He [Saddam Hussein] was trying to develop mass destructive weapons to include nuclear weapons,” Russell said in a 2012 speech. “The record is there. We found evidence of it even in Iraq. That’s a big misconception. Oh, there was no WMD, there was no nuclear program. That is false… They were clearly on a path to develop destructive weapons.” Russell, a former Oklahoma state senator, also made the dubious claim during this speech that the rationale for invading Iraq had little if anything to do with WMDs. “Was that the only basis for going in? No. It never was. It was never about WMD. It was about what right does one man have to defy the entire world.”

Since returning from Iraq in 2006, Russell has often said publicly that an active WMD program was uncovered there but that “the story was completely buried by the press.” Russell told an audience at Florida State University in 2007: “With regard to no weapons of mass destruction found, during my service in Iraq, US soldiers in Baghdad captured Saddam’s most prominent nuclear scientist, Dr. Ubaydi, and found a Zippe centrifuge, along with all the components and blueprints to produce more.” He explained that he had learned this from a “good buddy,” who had led the raid. “Saddam’s nuclear scientist stated that with the centrifuge technology, Iraq possessed all the technical skill to produce a nuclear bomb and were making efforts to do so. The centrifuge captured was the same centrifuge technology that Iran is currently using to enrich uranium and to develop their nuclear weapons.”

Russell’s assertions about Iraqi WMDs are contradicted by the official record. In 2004, at the request of then-President George W. Bush, Charles Duelfer, head of the Iraq Survey Group, released a report revealing that there had been no “concerted efforts to restart the [weapons] program.” As Duelfer told Congress, “we were almost all wrong.” While Ubaydi had indeed turned over a Zippe centrifuge after being captured, it was not part of any operating nuclear program—it was buried in his garden. The Duelfer report also deemed the transfer of biological and chemical weapons en masse from Iraq to Syria “unlikely.” (Russell did not respond to a request for comment.)

The idea that the United States uncovered an active weapons program in Iraq has lingered among Republican politicians. In May, Iowa state Sen. Joni Ernst, the Republican nominee to replace retiring Democratic Sen. Tom Harkin, told the Des Moines Register that she did “have reason to believe there were weapons of mass destruction in Iraq.” Ernst’s proof: her husband “served in Saudi Arabia as the Army Central Command sergeant major for a year and that’s a hot-button topic in that area.” Last year, Rep. Lee Terry (R-Neb.), speculated to an Omaha radio host that Iraq’s weapons of mass destruction were being used by the Syrian government against opposition forces.

After retiring from the Army in 2006, Russell set out to reverse the shifting political tides against the war. He formed a non-profit, Vets for Victory, that canvassed the country in support of the Bush administration’s plan to escalate troop levels. He had no patience for the war’s critics. “They’re basically rooting for our defeat over there,” he wrote in the New York Daily News in 2008. “It’s almost as if the enemy is working within our own borders, prompting America to lose heart.” At stake was no less than the nation’s manhood: “Do we honestly think then, that our nation can be held hostage by ten thousand insurgents equipped with little more than ‘man-dresses’ and flip-flops?,” he asked a crowd in Oklahoma City in 2007.

Russell was elected to the state legislature in 2008, where he floated a bill to expand open carry laws and made national headlines by comparing a back-to-school speech from President Obama that was aired in public school classrooms to “something you’d expect to see in North Korea or in Saddam Hussein’s Iraq.” After leaving office, Russell launched Two Rivers Arms Company, a gun manufacturer that specializes in replicating the Iraqi Tabuk rifle, an AK-47 spinoff.

In a crowded primary field, Russell’s Iraq war rep and previous electoral victory have moved him toward the front of the pack, which includes Oklahoma Corporation Commissioner Patrice Douglas, state Rep. Mike Turner, and state Sen. Clark Jolley. But with no obvious front-runner, it’s likely that none of the candidates will hit the 50-percent threshold needed to avoid a top-two runoff.