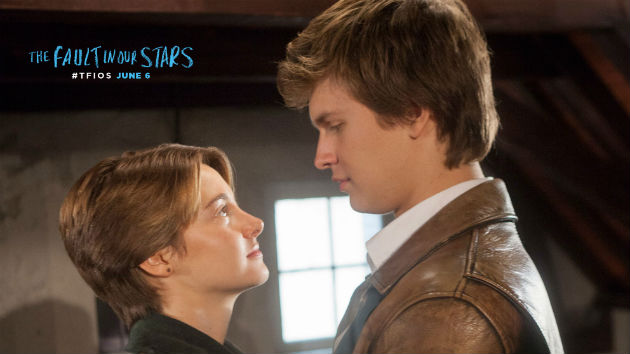 The scene set in the Anne Frank House in Amsterdam.Courtesy of 20th Century Fox

The Fault in Our Stars is a smartly crafted, touching film about teenage love and teenage cancer. The movie has been widely described as this year’s ultimate tearjerker: “Total emotional carnage—like having your head chopped off by a sword made of tears,” GQ staff writer Zach Baron said. “The Fault in Our Stars is an industrial-strength teen romance that will make you question everything you think you know about life, appreciate everything you have but didn’t appreciate before, and, unless you have no soul, cry like nobody’s watching,” ABC News’ David Blaustein declared. “The film sets out to make you weep—not just sniffle or choke up a little, but sob until your nose runs and your face turns blotchy,” the New York Times‘ A. O. Scott wrote. “It succeeds.”

So, yeah, there appears to be a consensus that the film will make you cry while you’re seated in a movie theater, surrounded by fellow sniffling patrons. Along with its various assaults on the tear ducts, The Fault in Our Stars also contains a bafflingly awkward (and arguably inappropriate) scene in which the two main characters make out in the same attic where Anne Frank hid from the Nazis.

Let’s back up for a minute. The film, based on John Green’s young-adult bestseller, tells the story of Hazel Grace Lancaster and Augustus Waters (played by Shailene Woodley and Ansel Elgort, both excellent), two lovebirds who found each other at a Jesus-heavy cancer support group. After their relationship starts to get serious, they travel to Amsterdam to meet Hazel’s favorite author. The trip includes a visit to the Anne Frank House, the world-famous museum that preserves the building where Anne Frank, the young Jewish wartime diarist, hid with her family during the Holocaust. Shortly after Hazel and Augustus reach the House’s attic (which features photos of the Jewish family members murdered by Nazi occupiers), they share their first kiss. A crowd of smiling tourists emphatically applaud the brief make-out session. Happy-sounding music plays.

Again, this scene is set in the attic where the Frank family would often go to get fresh air while trying to not get mass-murdered by Hitler.

Here’s Shailene Woodley describing the kiss to the Daily Beast (emphasis mine):

Anne’s story and Hazel’s story are so synchronistic, in a way—the theme of how you don’t have to live a long life to have a powerful and meaningful one—and Anne Frank had her first kiss in that house, and Hazel did, too. And then having the ability to film there and the history of what those walls held was powerful in those scenes. Hazel’s thinking, “This might be the last time in my life I’m here, and if I have to die going up these stairs, I’ll die going up these stairs.” She’s also thinking, “If Anne Frank did it, I can do it.”

Fair enough. Maybe. But they’re still making out in the Anne Frank House, which is at least a couple notches more problematic than making out during a screening of Schindler’s List. The scene has already weirded-out some in the press. “The Anne Frank House? Are you kidding me?” GQ associate editor Mark Byrne said. LA Weekly‘s Stephanie Zacharek called the kiss, “highly dubious.”

At the very least, it doesn’t seem as though the folks at the real-life Anne Frank House are offended by this. In the special-thanks section of the film’s end credits, the Anne Frank House gets the first shout-out for their cooperation. And though the cast and crew were on-location in the summer of 2013 for shots of the museum’s exterior and entrance, a spokeswoman for the Anne Frank House told me that the parts of the sequence set inside the building were filmed at a replica elsewhere. “We have not seen the film, so we cannot express any opinion on it,” Annemarie Bekker, at the House’s communications department, said. “In the book [the kiss in the attic] is a moving and sensitively handled scene.” Bekker also said that the Anne Frank House was not involved in the production, but that they did give the cast and writer a guided tour, and allowed them to film outside.

Anyway, it’s not like the kiss tanks the rest of the movie. The Fault in Our Stars is a well-acted, genuinely moving experience that also happens to include a strange moment of Holocaust-associated lip-locking.