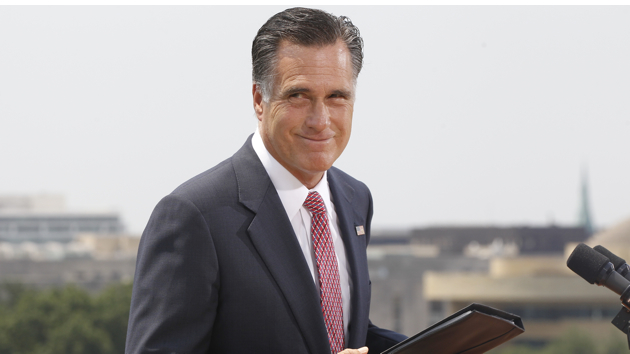 Wow, things sure have gotten dire for the supposed-moderate wing of the Republican Party. Over the weekend, just days after Rep. Eric Cantor (R-Va.) lost his primary to a tea party upstart, a group of business-minded GOPers convened in Park City, Utah, where they pined for what might have been. Let the Mitt Romney Resurrection begin!

With a theme of “The Future of American Leadership,” the conference had been convened by Romney, and included a host of Republican officials who have been speculated to be the nominee in 2016: New Jersey Gov. Chris Christie, Rep. Paul Ryan (R-Wis.), Sen. Rand Paul (R-Ky.), New Mexico Gov. Susana Martinez, and former Arkansas Gov. Mike Huckabee. But despite the presence of those bigwigs, attendees were still looking to the past. Near the start of Friday, according to the Washington Post, MSNBC host and former congressman Joe Scarborough called for a Draft Romney movement. “This is the only person that can fill the stage,” Scarborough was quoted as saying.

Scarborough wasn’t alone; Romney’s major donors joined the chorus of calling for his return, and former Montana Gov. Brian Schweit­zer (himself a potential 2016er on the Democrats’ side) offered a lukewarm endorsement of the cause. “He would be a giant in a field of midgets,” Schweit­zer said. Romney’s supporters have tried to repair his image since his failed presidential bid, pointing to instances like Russia where they claim he was right all along.

Romney himself isn’t buying into his own renewed hype. “I think people make a lot of compliments to make us all feel good, and it’s very nice and heartening to have people say such generous things,” he told reporters. “But I am not running, and they know it.” And just to help remind people of why he’s not likely to run again, Romney rolled out one of his patented Mitticisms: “The unavailable is always the most attractive, right? That goes in dating as well.”

Still, the concept isn’t wholly far-fetched. Richard Nixon was a joke after the 1960 election, but eight years later he called the White House his home. As time passes distasteful memories fade to fond remembrances. Even George W. Bush has seen his approval ratings nudge back up. And the Chamber of Commerce Republican crowd have seen their other favorites fall by the wayside. Christie is still mired in Bridgegate. Jeb Bush is another crowd pleaser among this cohort, but he’s been tepid about a potential bid and has the slight problem of his baby brother’s legacy tarnishing the family name. Paul Ryan has given donors mixed signals about his intentions. Perhaps they need Romney—else they end up with Rand Paul or Sen. Ted Cruz (R-Texas).

But lest his erstwhile supporters forget, Romney was a uniquely atrocious presidential contender, one who consistently put his foot in his mouth and alienated half of the country. With income inequality remaining one of the most salient issues for upcoming elections, a rerun of the the walking embodiment of the wealth gap wouldn’t do the GOP any favors. Romney lucked into the nomination last time around, facing off against a slipshod assortment of ill-suited candidates. Even as potential candidates like Christie struggle, Romney wouldn’t be so lucky the next time around.