With the battle for control of Eastern Ukraine waging on, President Obama arrived in Poland for a four-day trip intended to reassure Europe of US support. He met with Poroshenko, and also proposed the formation of a $1 billion security fund to protect US allies in Europe from further Crimea-esque expansion efforts by Russia. Below, some photos take you through this week’s developments in the Ukraine conflict: (WARNING: Some graphic images) 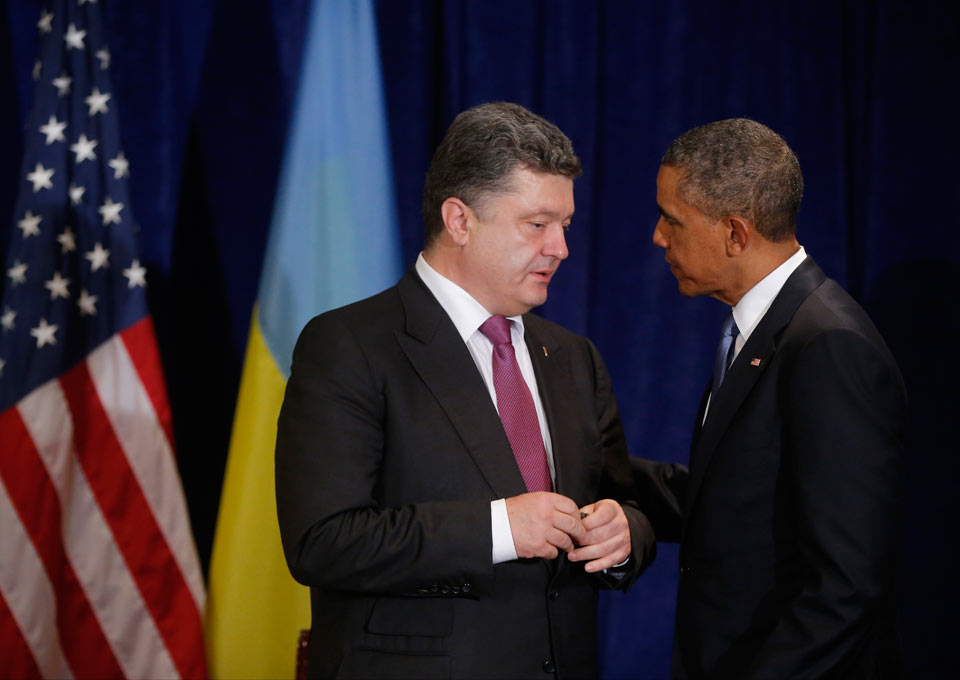 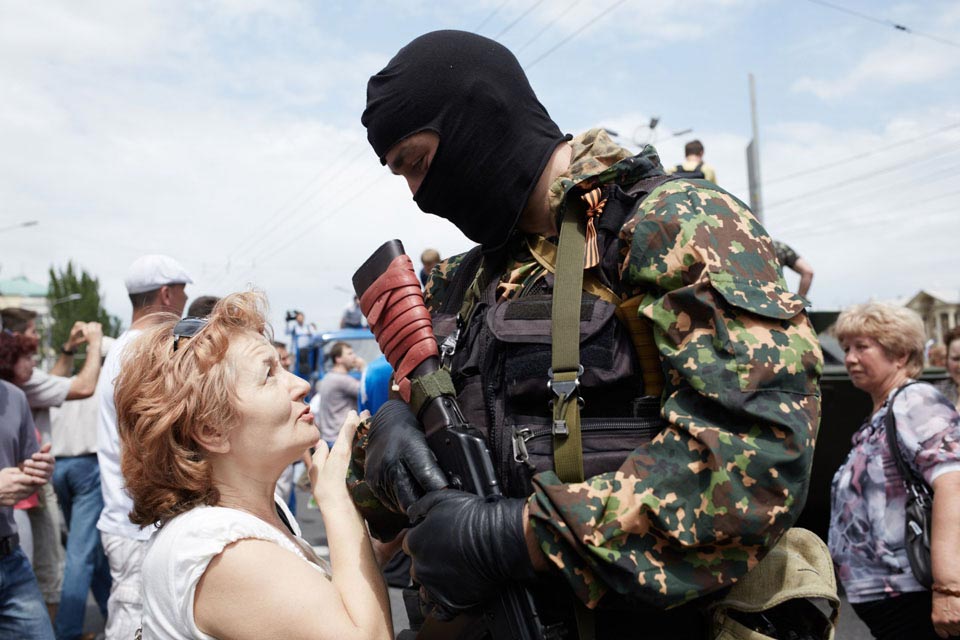 A woman thanks a member of the Vostok Battalion. Earlier, the battalion came to Lenin Square in Donetsk to celebrate the area’s boycott of the election by firing shots into the air. Rex Features/AP Photo 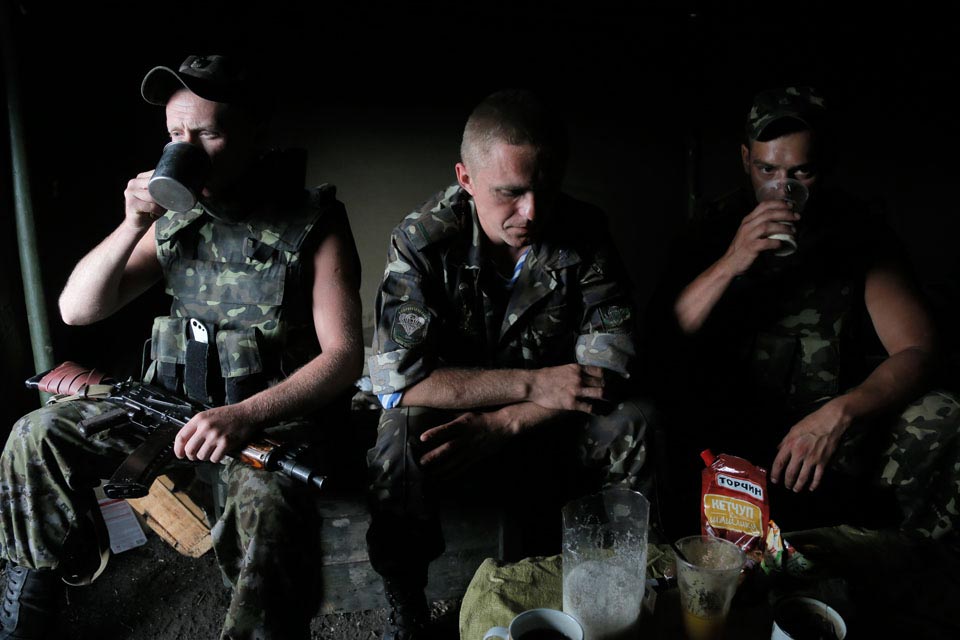 Ukrainian soldiers take a rest at a checkpoint outside Slovyansk, Ukraine, on Thursday, May 29. Efrem Lukatsky/AP Photo 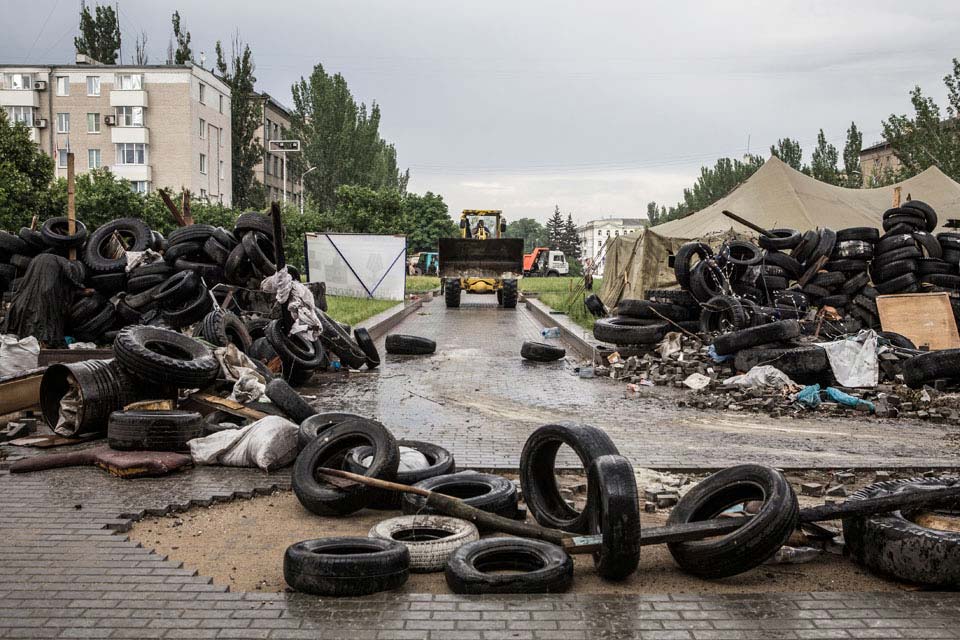 Dismantling barricades in the city of Donetsk after members of the Vostok Battalion cleared out the regional administration building, where activists were running the self-proclaimed People’s Republic of Donetsk. Sandro Maddalena/NurPhoto/Sipa USA/AP Photo 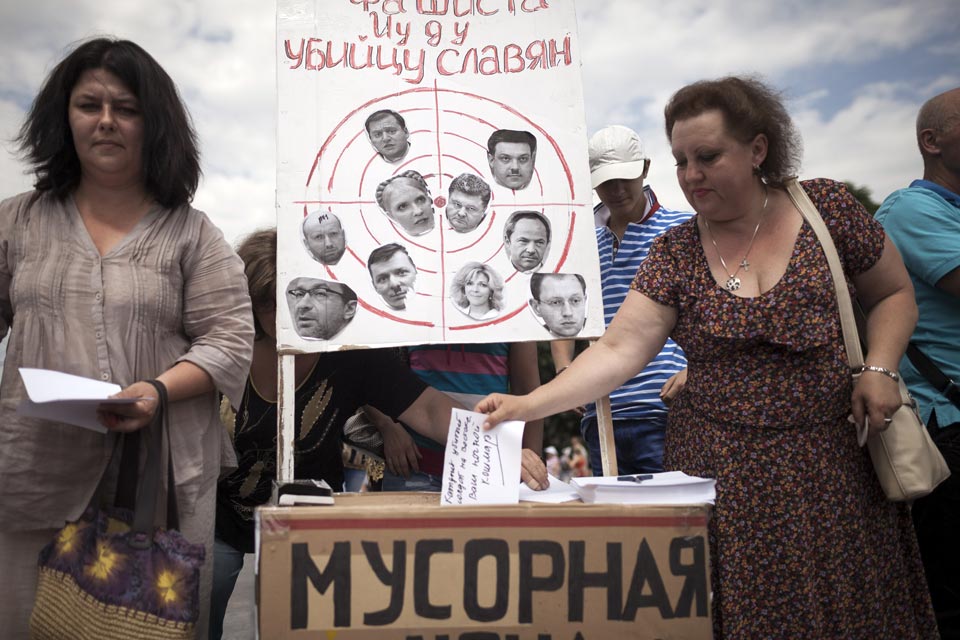 Pro-Russians in Donetsk, Ukraine hold a mock presidential election in May, choosing which candidate to kill by depositing “ballots” into a box labeled “garbage can.” Janos Chiala/NurPhoto/ZUMA Press 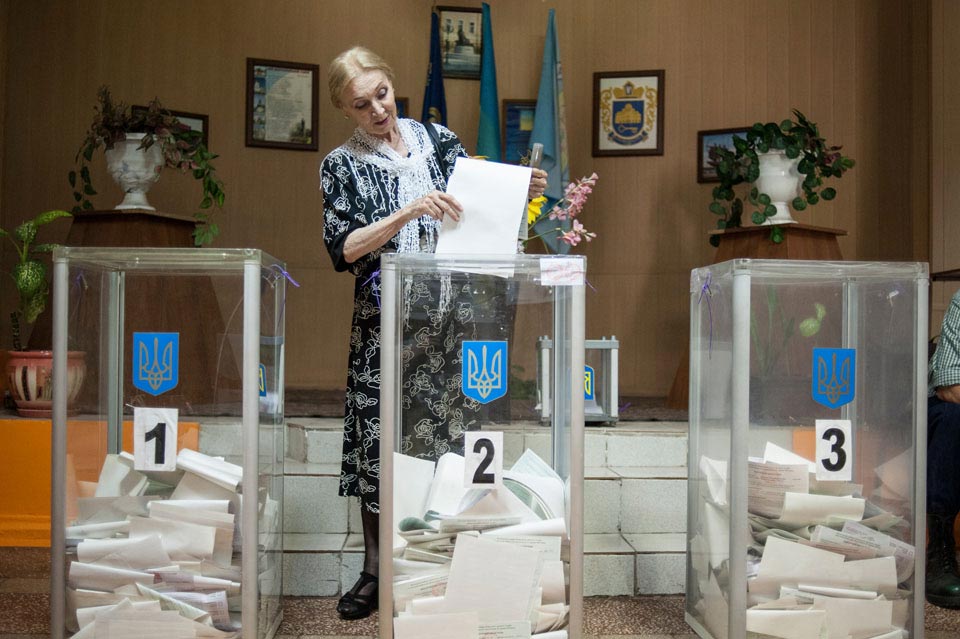 A woman casts her ballot at a polling station during presidential and mayoral elections in Kiev on Sunday, May, 25. Evgeniy Maloletka/AP Photo 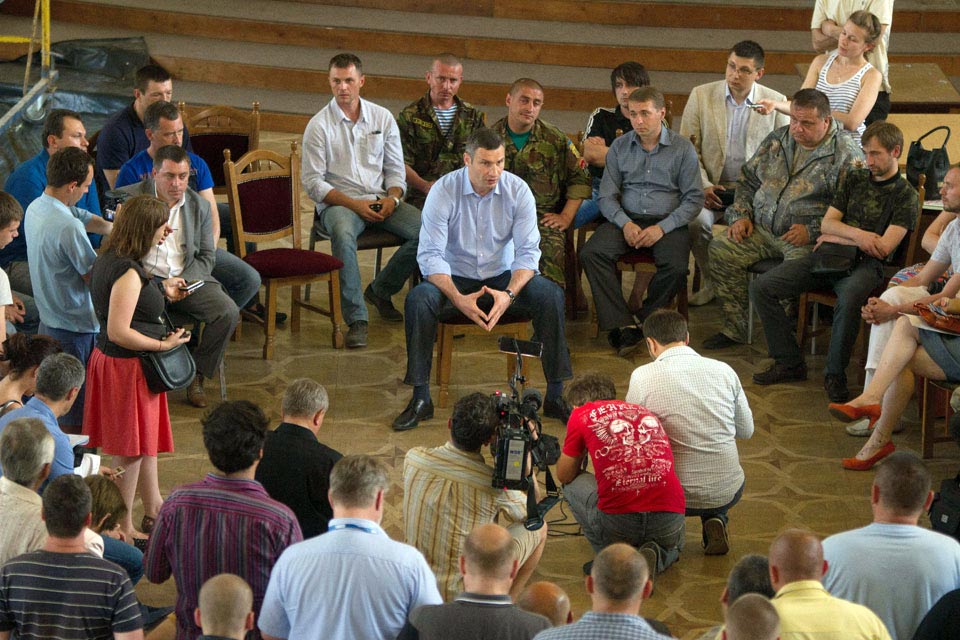 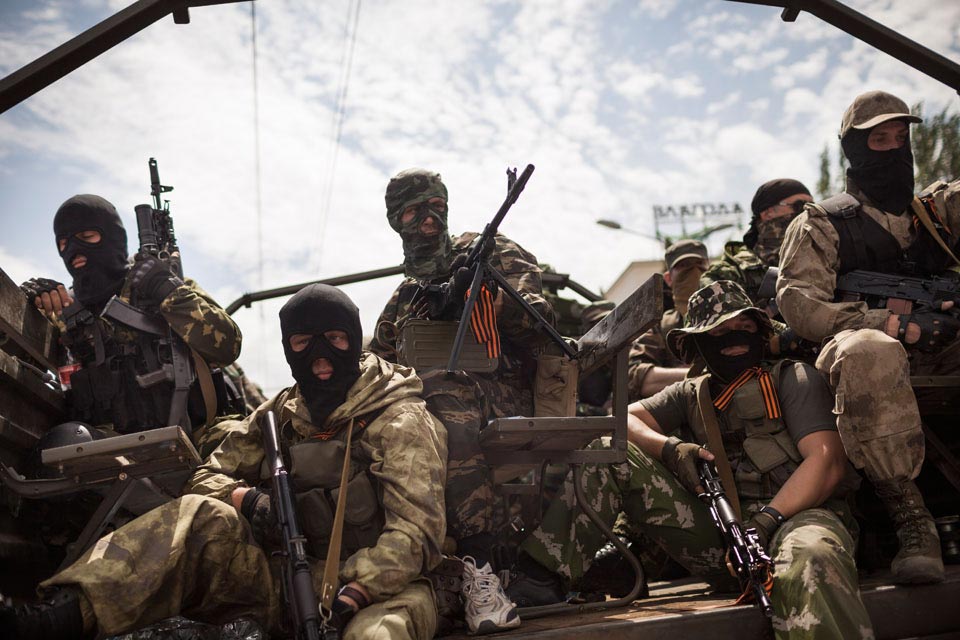 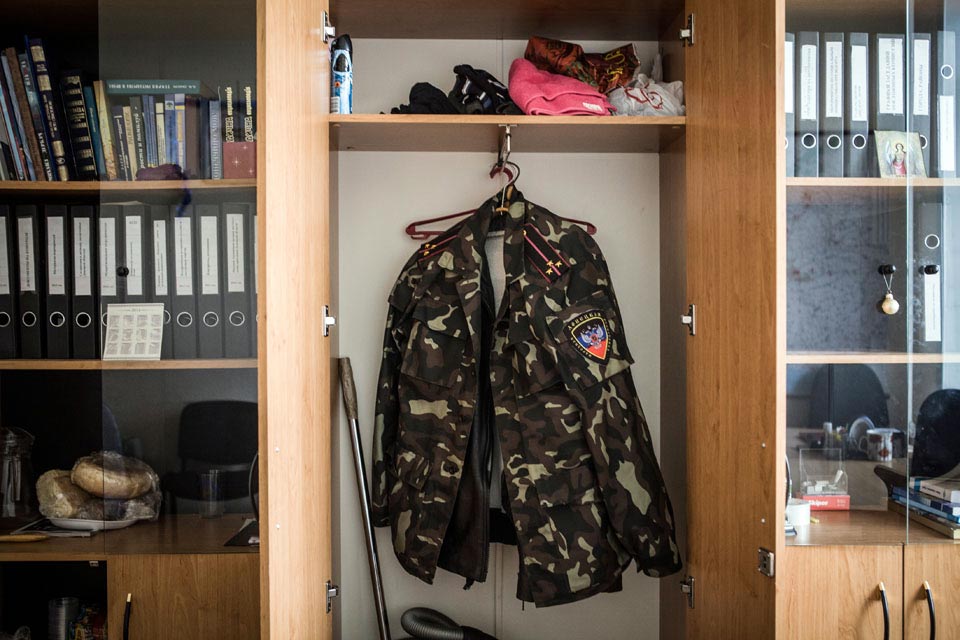 A jacket belonging to a member of the Vostok Battalion hangs in Donetsk’s regional administration building after the battalion ousted the activists occupying the building. Sandro Maddalena/NurPhoto/Sipa USA/AP Photo 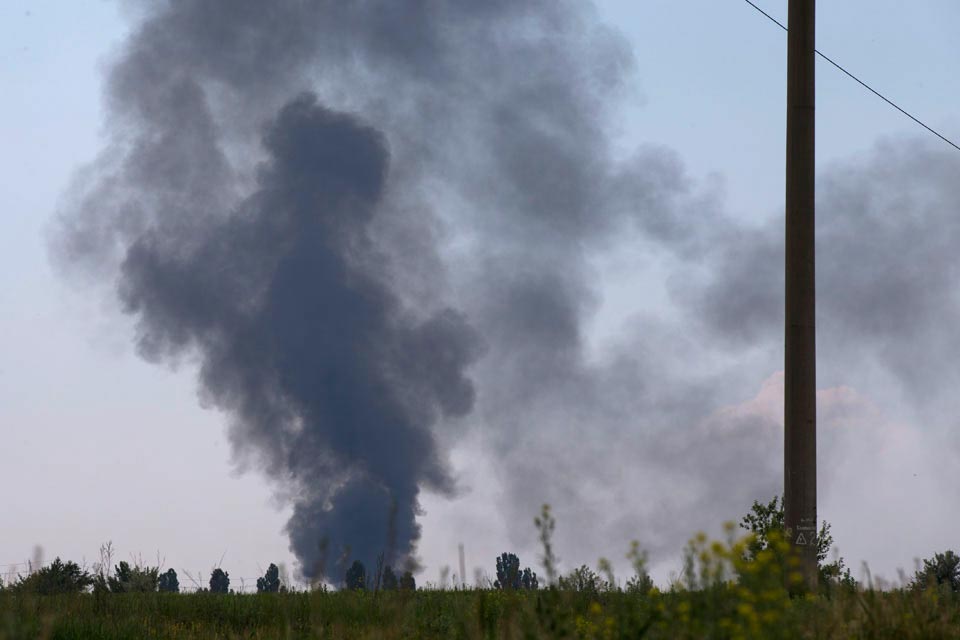 Black smoke rises from a shot down Ukrainian army helicopter outside Slovyansk, Ukraine, on May 29. Alexander Zemlianichenko/AP Photo 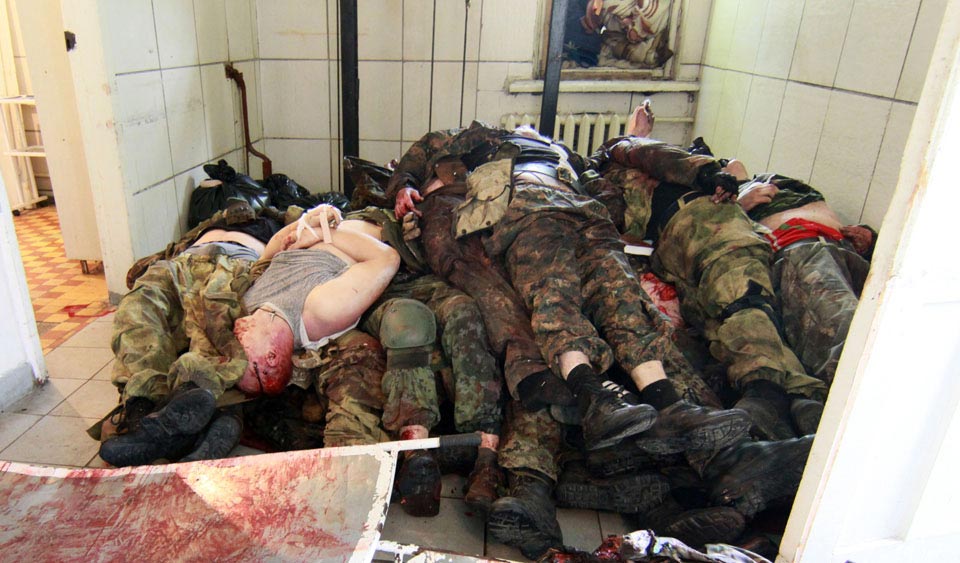 The bodies of pro-Russian gunmen killed in clashes with Ukrainian government forces around the Donetsk airport at the city morgue, which received at least 30 bodies. Konstantin Sazonchik/ITAR-TASS/ZUMA Press 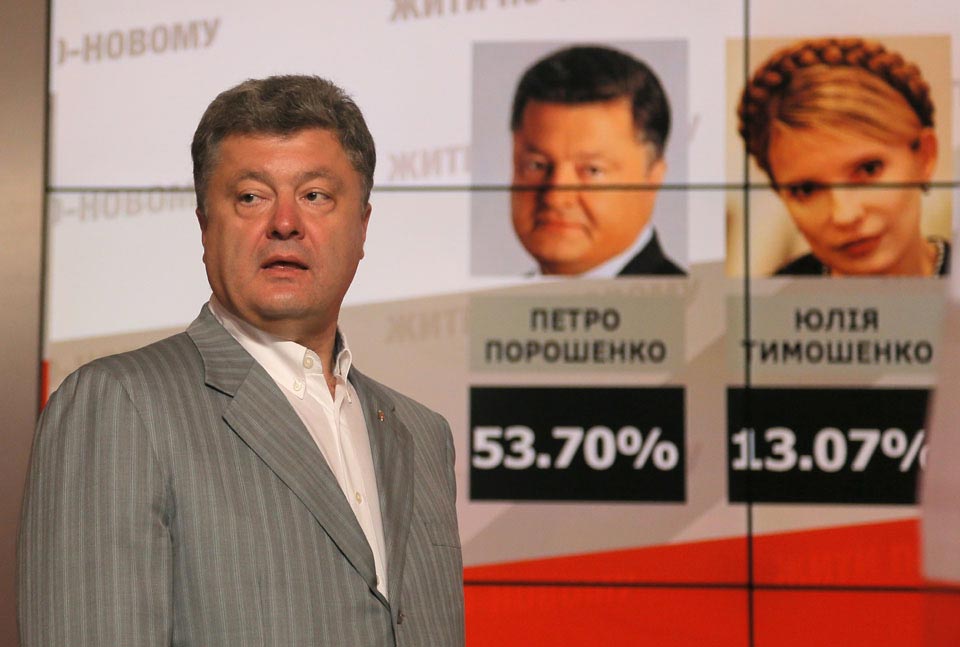 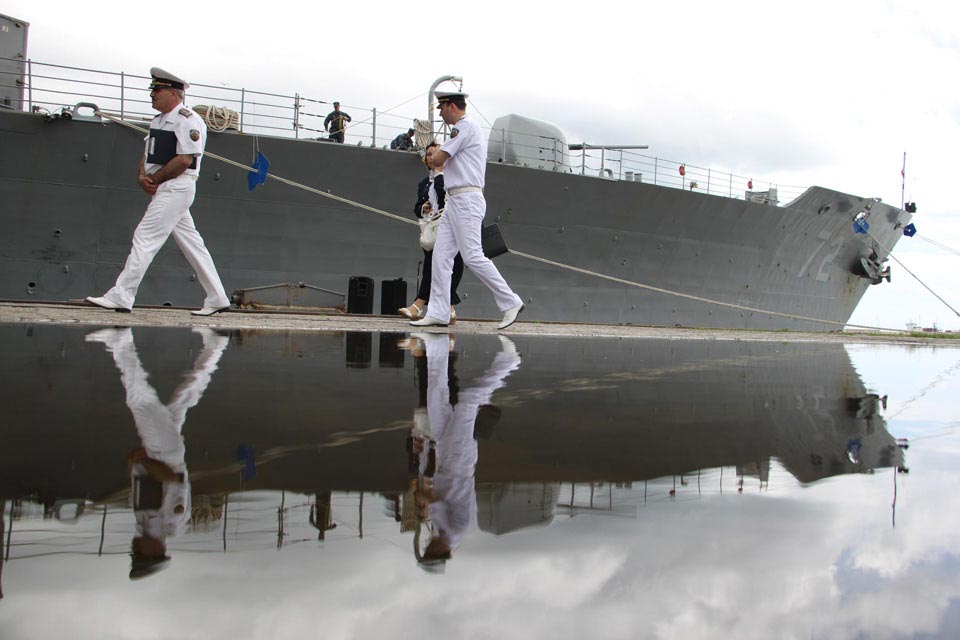 The Navy’s USS Vella Gulf takes a part in a peacekeeping mission in the Black Sea, which borders both Russia and Ukraine. Rex Features/AP Photo 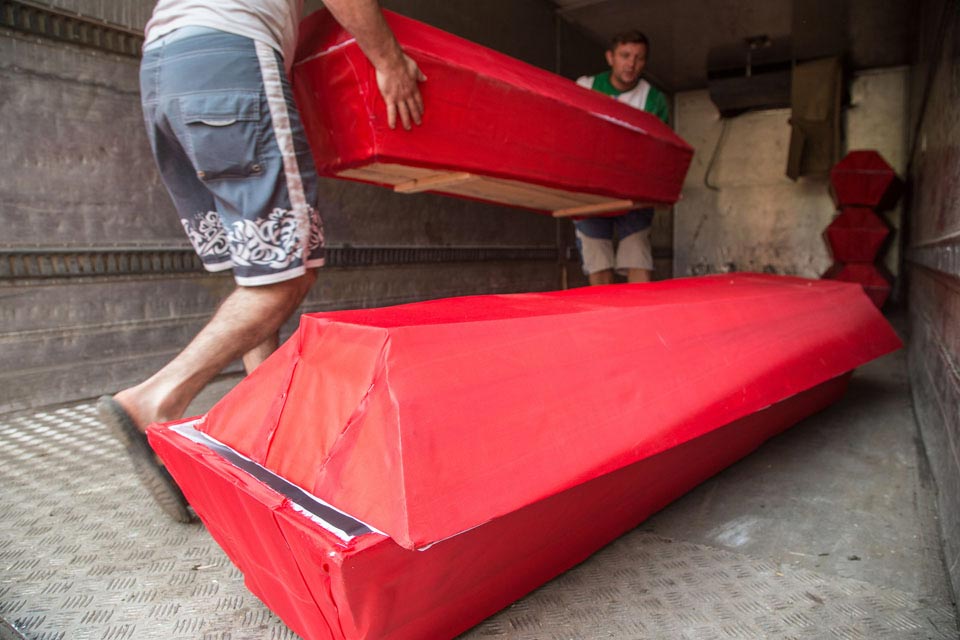 Empty coffins are loaded into a refrigerated truck in Donetsk, Ukraine, on May 29. The coffins will be used to send the bodies of pro-Russian fighters killed at the Donetsk airport to Russia. Jan A. Nicolas/DPA/ZUMA Press 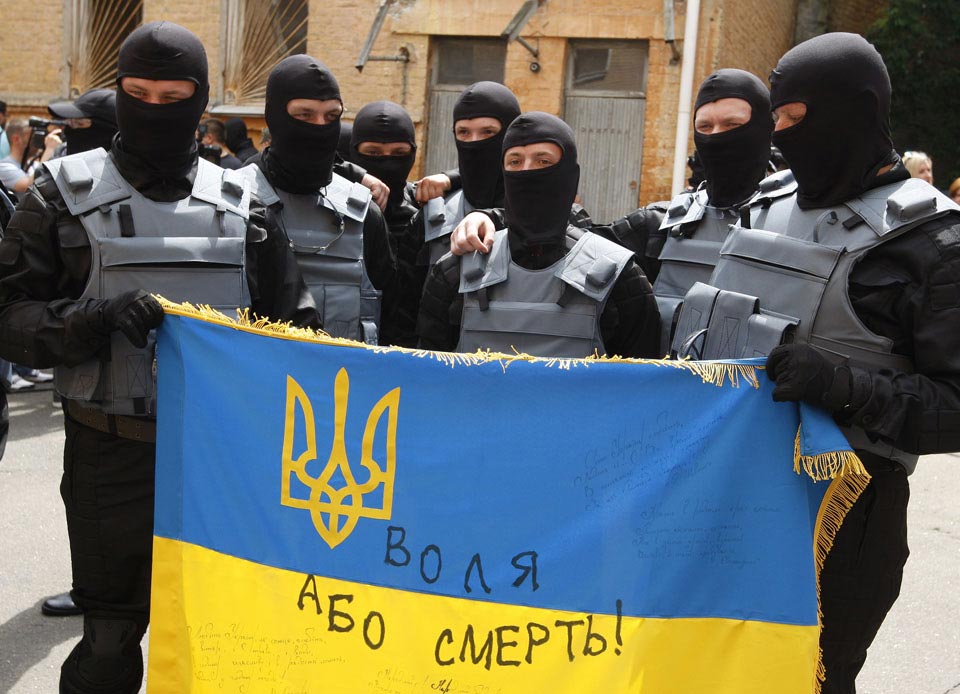 Volunteers pose with a Ukrainian national flag on June 3 as they join the Azov Battalion. It reads “liberty or death.” Maxim Nikitin/ITAR-TASS/ZUMA Press 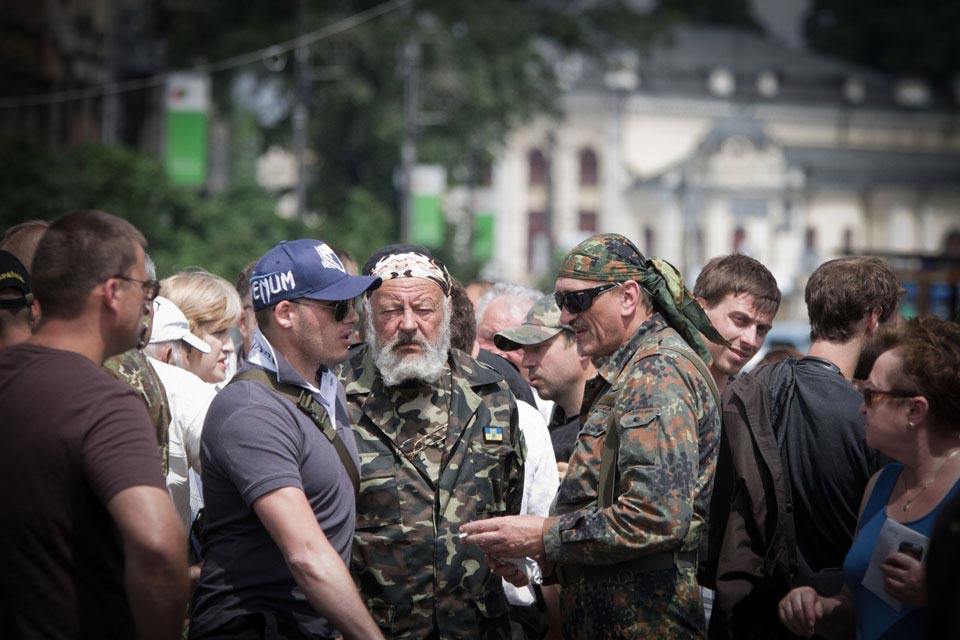 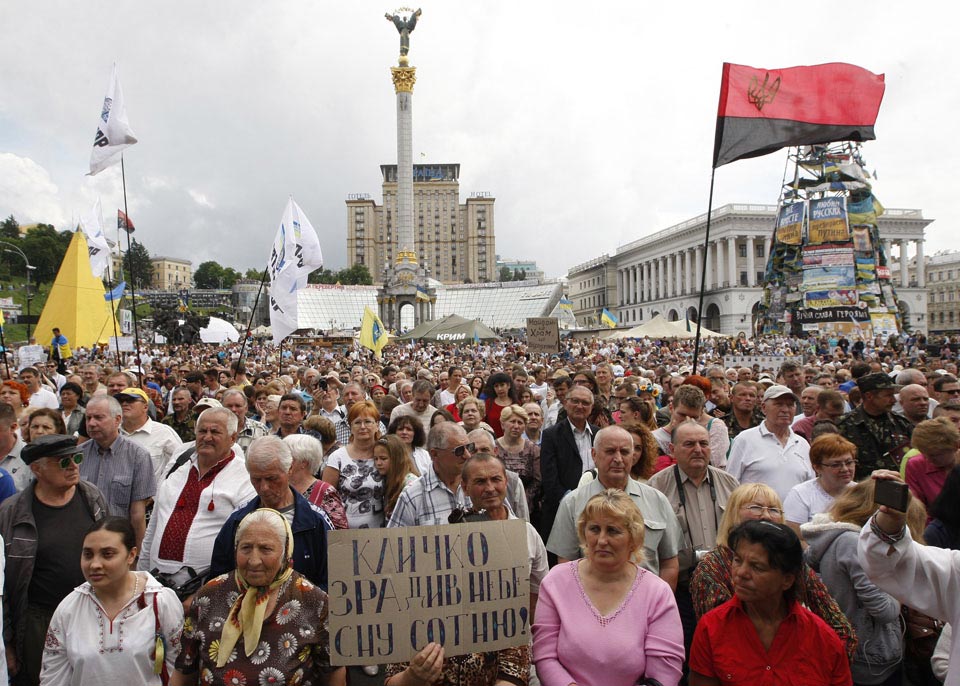 A rally in Kiev’s Independence Square on June 1, intended to address the future of Maidan. Maxim Nikitin/ITAR-TASS/ZUMA Press 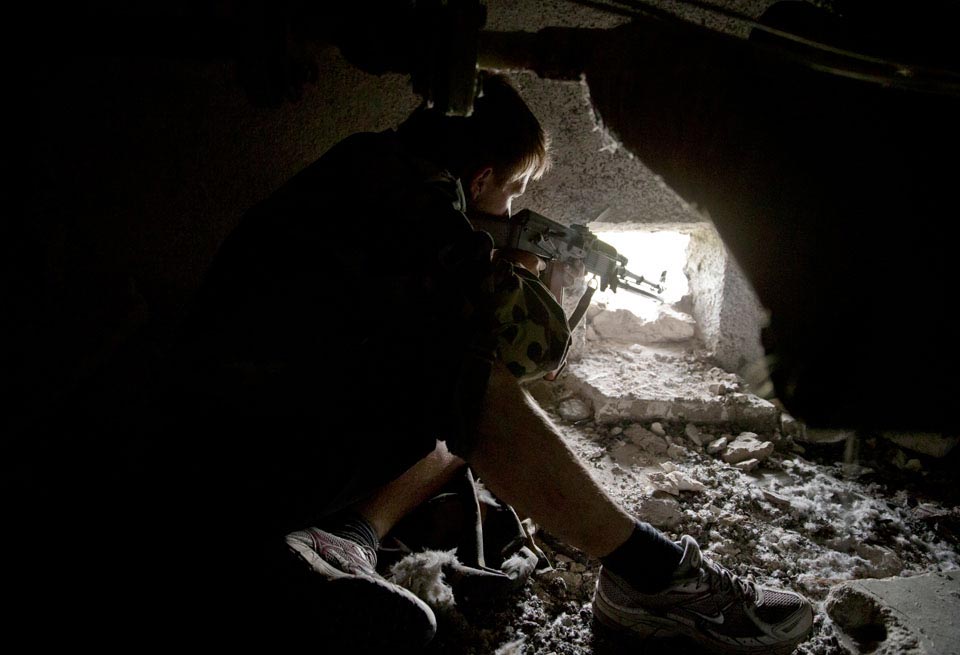 A Pro-Russian rebel fires at Ukrainian troop positions from the top level of an apartment building during clashes on the outskirts of Luhansk on June 2. Vadim Ghirda/AP Photo 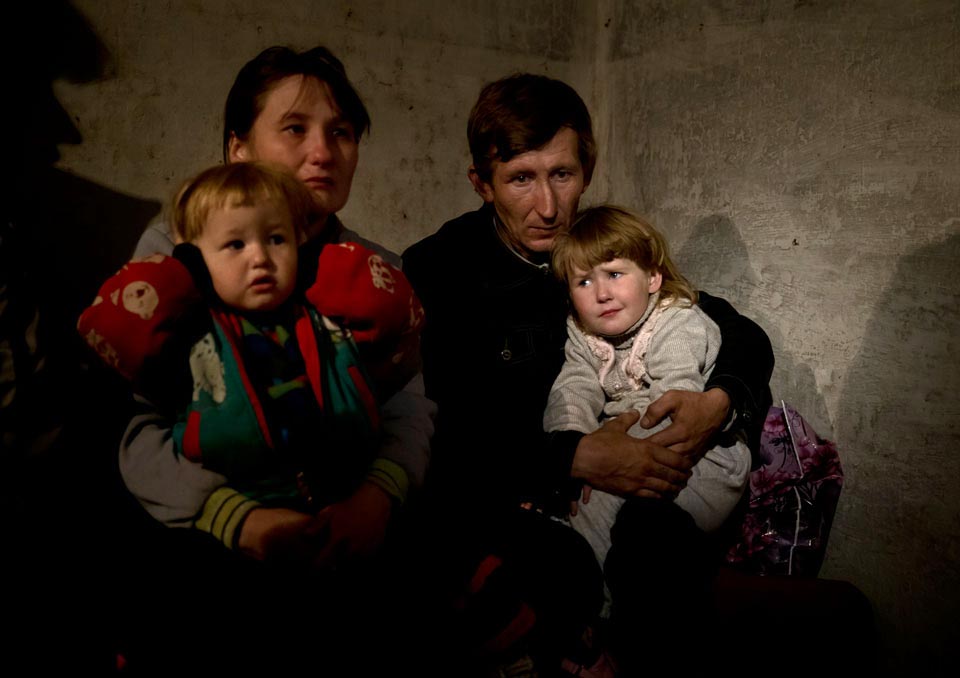