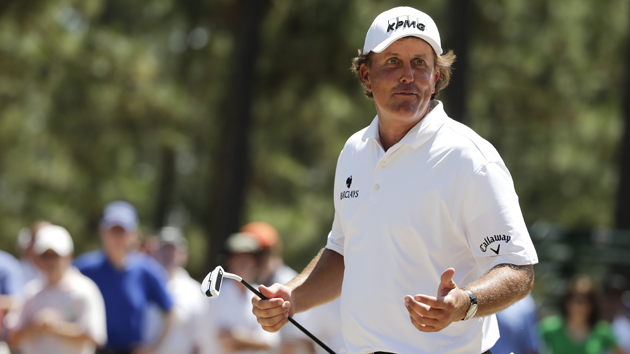 Conservative conspiracy theories about President Barack Obama know no bounds. But the latest incarnation might be the craziest yet. It centers around Obama’s alleged plot to destroy pro golfer Phil Mickelson.

At the end of May it was reported that the FBI and SEC were investigating whether Mickelson and bigwig sports gambler and golf course owner Billy Walters had engaged in insider trading using secret knowledge obtained from billionaire investor Carl Icahn. The initial leaks suggested that Icahn may have given advance warning to Walters in 2011 that he was planning a takeover of Clorox, which Walters relayed to Mickelson so he could buy stock in the company right before its value soared.

Mickelson has denied wrongdoing and cooperated with authorities, and further news reports appear to absolve the golfer. (The SEC declined to comment for this story.) Last week, the New York Times reported that Mickelson hadn’t traded shares of Clorox, although the probe remains open on Icahn and Walters. But that hasn’t stopped conservative blogs from speculating about how the personal politics of Mickelson, Icahn, and Walters are the reason the federal government is investigating their business dealings.

“Our nation is under attack. The Obama Crime Family is at it again,” opens a blog post by Wayne Root at Glenn Beck’s The Blaze. “They are practicing the art of Chicago thug politics to kill free speech and ban political dissent. And no one is connecting the dots.” Root notes that each of the three have supported Republican causes or been critical of Obama. “You think that’s a coincidence? Not a chance,” he writes. “There is a six-year widespread pattern of conspiracy to take down critics and GOP donors. This is just more of the same pattern.”

Root isn’t alone. Conservative blog American Prosperity News Network also cried foul play on the part of the Obama administration. “What’s the crime these gentlemen are truly guilty of?” their post reads. “Criticizing—and funding the political opposition of—one Barack Hussein Obama. He knows that ObamaCare is an abysmal failure, and the VA Hospital, Benghazi and IRS scandals have made Democrats very politically vulnerable.”

All three do have ties to conservative politics. Last year Mickelson railed against high tax rates for millionaires. Icahn donated to Mitt Romney’s 2012 campaign. Walters’ company chipped in $100,000 to a super-PAC devoted to maintaining the GOP’s majority in the US House. But the idea that Obama concocted a scheme to have the federal government root out a fake scandal for these minor slights is a tad far-fetched.

“Phil has never mentioned a political motivation or any other motivation, for any agency to include him in the investigation,” T.R. Reinman, a spokesperson for Mickelson, said in an e-mail to Mother Jones.