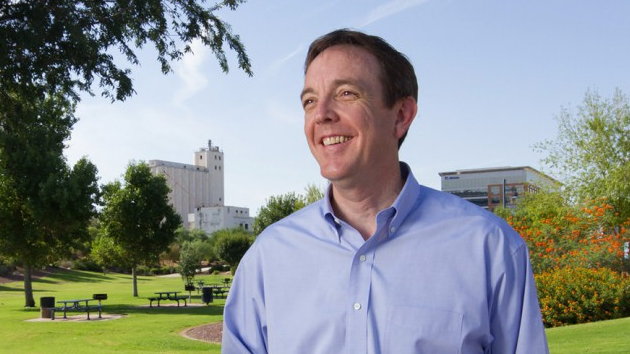 Ken Bennett, the Arizona secretary of state best known for threatening to leave President Obama off the ballot in the state if Hawaii didn’t produce verification of Obama’s birthplace, is now a leading candidate in the Republican primary to become the state’s next governor.

Bennett, who insists that he’s not a birther, sent a request to Hawaiian officials for verification of Obama’s birthplace in the spring of 2012, about a year after the White House produced a detailed copy of Obama’s birth certificate. Bennett was following in the footsteps of Joe Arpaio, the controversial Republican sheriff of Maricopa County, who had launched his own investigation into the authenticity of Obama’s birth certificate the year before. (Arpaio ultimately concluded that the birth certificate released by the White House was “definitely fraudulent.”) Bennett asked Hawaii to provide “a verification in lieu of a certified copy of a birth certificate.” (As Alex Koppelman points out in The New Yorker, a die-hard birther would never be satisfied with “verification in lieu” of a birth certificate.) At first, Bennett told CBS 5 that he looked into the issue on the request of “a constituent.” (He told Mother Jones this week that he received “thousands” of emails from constituents.) Bennett told Phoenix station KFYI that if Hawaii refused to comply with his request, it was “possible” that that he would exclude Obama from the ballot.

“As Arizona’s chief elections officer, I have the responsibility to certify the ballot to the state’s 15 counties,” Bennett tells Mother Jones in an email. “At the request of numerous constituents, I merely asked Hawaiian officials to verify the information contained within President Obama’s original birth certificate. They eventually complied with the request and I considered the matter closed.” He adds, “I always felt the President was a U.S. citizen, and the controversy was a distraction from the real issues of the campaign.?”

Although there’s not a clear favorite yet in the Arizona GOP gubernatorial primary, early polling shows Bennett at the front of the pack. David Berman, a professor at Arizona State University who focuses on state and local politics, says that “most pundits would think of Bennett and [former Mesa Mayor Scott Smith]? as the top two.” The winds could shift, Berman adds, towards whichever candidate wins Republican Gov. Jan Brewer’s endorsement. The winner of the primary is expected to face Democratic candidate Fred DuVal in November.

Bennett isn’t the only controversial figure in the race. The candidates include state Sen. Al Melvin, a tea party darling who championed Arizona’s anti-gay bill and claimed that he’s never seen discrimination in Arizona, and Andrew Thomas, a former county prosecutor who was disbarred in 2012 over allegations of ethical misconduct.