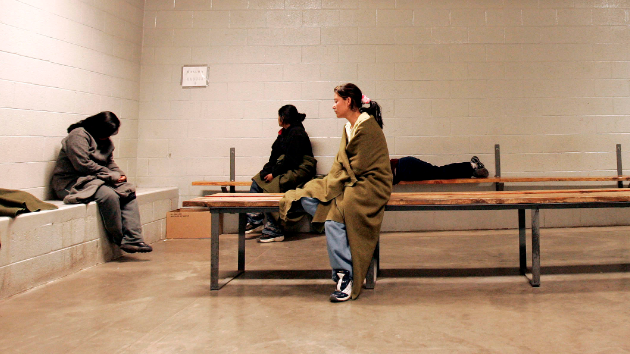 Alba Quiñones Flores started her period the first week that she was in the custody of US Customs and Border Protection. Every morning, a guard delivered sanitary napkins to her cell of 20 women—but only four or five pads for all of them. Quiñones couldn’t scramble to the door fast enough to claim one. She’d injured her ankle crossing the Mexican border before CBP picked her up near Falfurrias, Texas, and she still hadn’t received first aid. A CBP agent had thrown out the pills and insulin she needed to treat her myriad health problems, including hypertension, diabetes, migraines, anxiety, and convulsions. So Quiñones wound up using the same, single sanitary pad for her entire period. She tried to extend its life by covering it in toilet paper, but without success, and her pants and underwear became soaked in menstrual blood.

This is just one of a series of allegations that Quiñones has lobbed at CBP in a lawsuit she filed in federal court in late May. Quiñones, who fled her native El Salvador to escape domestic abuse, is among the first former CBP detainees to sue the agency for abuse suffered while in custody, and her complaint is one of a string of lawsuits that immigrants rights advocates kicked off in March 2013 to highlight dismal conditions in CBP facilities.

Quiñones’ allegations are commonplace, according to immigration attorneys and immigrant rights advocates who have interviewed hundreds of the hundreds of thousands of immigrants temporarily detained by CBP every year.

“Her story was particularly horrendous—but lots of these stories are pretty horrendous,” says Melissa Crow, the director of the legal division at the American Immigration Council, a group that advocates for immigrants’ right. “We hear people say, ‘They took my insulin,’ ‘I broke a bone and didn’t get any treatment,’ all the time,” adds Jennifer Podkul of the Women’s Refugee Commission. Detainees have little recourse. The American Immigration Council obtained more than 800 complaints of physical, sexual, and verbal abuse lodged by detainees between January 2009 and January 2012, and found that 97 percent of complaints resulted in no punishment.

The problems plaguing CBP facilities are directly linked to overcrowding at detention centers run by Immigration and Customs Enforcement (ICE). Beginning in 2006, conservative lawmakers forced ICE to meet detention quotas. At the same time, the number of ICE detention facilities has shrunk. CBP’s role is to detain suspected illegal immigrants—for a very short period of time—before turning them over to ICE custody. (An internal CBP directive from 2008 reads, “Whenever possible, a detainee should not be held for more than 12 hours.”) But with space at a premium in ICE facilities, CBP outposts increasingly have been used to warehouse the backlog of thousands of suspected undocumented immigrants. In South Texas’ Rio Grande Valley sector alone, where CBP held Quiñones, there are nine stations housing some 3,500 detainees—nearly half of them children.

When she arrived at the border patrol station in February, Quiñones claims, CBP kept her and the 20 other women in a frigid concrete holding cell that prisoners and guards alike called a hielera (Spanish for “icebox”), a well-documented feature of CBP custody. (In an anonymous survey of former CBP detainees, an advocacy group called No More Deaths heard from 3,000 respondents who weathered extreme cold.) “Quiñones Flores and the other detainees in the cell were not provided mattresses, blankets, or any other form of bedding,” her lawsuit reads. “She and the other detainees were left to sleep on the frigid cement floor of the cell where, absent complete exhaustion, they could not sleep. Many stood up during the evenings until they simply collapsed on the floor.” Quiñones’ suit also claims “the cell was so cold that Ms. Quiñones Flores’ fingers turned blue and her lips split”—echoing the accusations of another prisoner, “Amelia,” from a March 2013 lawsuit.

Quiñones claims that CBP held her for an unspecified number of days in three different short-term facilities. During that time, she claims:

Neither the agency nor the CBP agents union responded to requests for comment.

CBP eventually released Quiñones to ICE custody. It was then that she made contact with immigration attorneys—not to complain about her treatment, but to pursue her original goal in coming to the United States: asylum. In the meantime, Quiñones is suing the government for monetary damages. Joseph Anderson, a member of the nonprofit Americans for Immigrant Justice and one of Quiñones’ attorneys, says that as far as legal relief goes, she doesn’t have any other options because CBP sets all guidelines for detainee treatment internally; those standards aren’t a matter of federal law. As a result, while Quiñones can sue on her own behalf, “we can’t also go to court on behalf of thousands of people being held in similar situations,” Anderson says. “We can’t ask the court to stop what’s happening.”

Through public records requests, organizations such as Anderson’s have managed to discover what some of those internal standards are. They include timely access to medical attention and prescriptions, and access to drinking water, soap, toilet paper, and sanitary napkins, and clean bedding.

Sen. Barbara Boxer (D-Calif.) and Rep. Lucille Roybal-Allard (D-Calif.) have introduced separate bills to make standards for the treatment of detainees in CBP and ICE facilities federal law. As with most immigration legislation, however, neither bill has a good chance of passing Congress, says Anderson.

In the past year, as more allegations like Quiñones’ have cropped up, CBP has begun to rewrite its internal standards. But Crow points out that the problem is not that there are no standards—it’s that there is weak oversight, internal or external, to ensure that CBP agents abide by them. Crow says that to date, the agency has not agreed to set up such an oversight process.

Anderson says this is part of why his group has moved forward with Quiñones’ lawsuit. “It’s just crystal clear that they’re wildly out of compliance with their own internal standards,” he says. “If they don’t enforce the standards they have, we don’t see why they would do that with the new ones.”