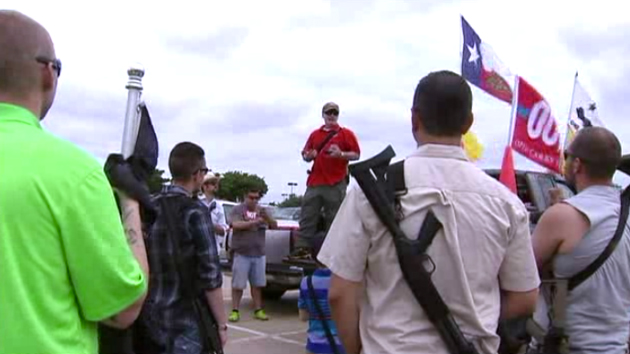 On Saturday in the Dallas suburb of Irving, a group of men armed with semi-automatic rifles gathered in a parking lot outside a Target store for a demonstration led by the group Open Carry Texas, whose goal is the loosening and abolishment of gun regulations. (It’s legal in Texas to carry rifles on display in public, but not handguns.) As I reported recently, Open Carry Texas drew Target into the ongoing political battle over gun laws by encouraging its armed supporters to parade through the store’s toy aisles, tote Oreos along with their ammo, and boast that “Target is very 2A friendly.” (The group and its allies have also been involved in some disturbing intimidation tactics and recently were rebuked by the National Rifle Association.) 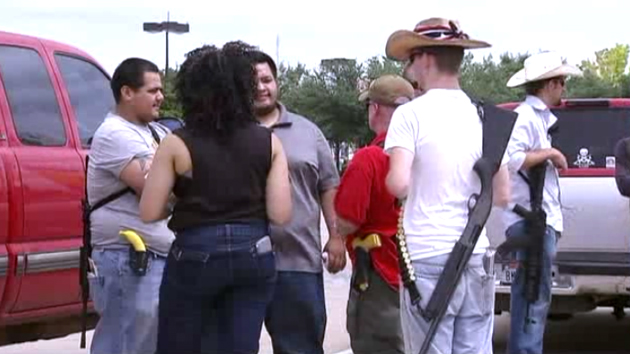 In response, the national advocacy group Moms Demand Action for Gun Sense in America has put pressure on Target via social media, a petition campaign, and a protest outside Target’s annual shareholders’ meeting last week, which happened to be in Dallas.

While Moms Demand Action has now helped push seven corporate food and beverage chains—including Starbucks, Chipotle, Sonic, and Chili’s—to reject firearms at their places of business, to date Target has essentially dodged the issue, saying it has no policy regarding open carry. “As we have previously shared, the safety and security of our guests and team members is our top priority and we follow all local, state and federal laws,” Target spokesperson Molly Snyder told me in an email on Sunday, adding, “We respect the rights of our guests to express their opinions and we will continue to listen and take their feedback seriously.”

According to Jennifer Hoppe, a program director for Moms Demand Action, Target knew that the open carry activists were coming. Hoppe told me she spoke by phone on Saturday with a manager at the Target store in Irving, who said that Open Carry Texas had alerted them in advance of the armed rally. According to Hoppe, the manager confirmed that the gun activists were on Target property but did not enter the store, and that local law enforcement officers were also present “so that customers would feel safe.” (The manager declined to give her full name, according to Hoppe.)

Snyder, the Target spokesperson, confirmed that the demonstration took place “in an area in front of our store” but said that it wasn’t on Target property.

On Sunday, members of Moms Demand Action stepped up their criticism on social media:

@Target You have an obligation to protect children in your store. Don’t be #OffTarget #MomsDemand @shannonrwatts pic.twitter.com/ZfoZtdvi0O

@Target What do you suggest we tell our kids when we drive up for a Bday gift & see this? #OffTarget #MomsDemand pic.twitter.com/9FLTibObnB

That tweet referred to the yellow “Don’t Tread on Me” flag popular among pro-gun activists and tea party supporters, which two cop killers left on their victims during a gun rampage in Las Vegas earlier this month. 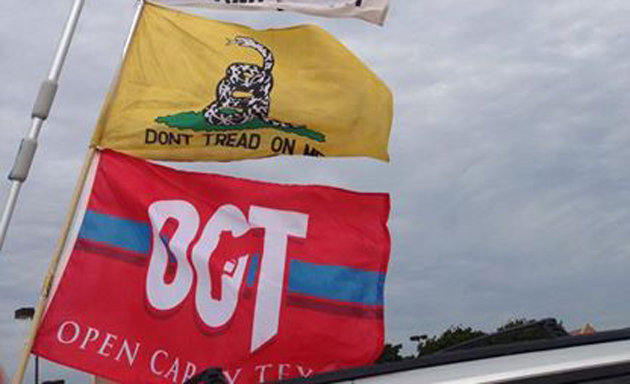 For more of Mother Jones’ award-winning investigative reporting on guns in America, see all of our latest coverage here, and our special reports.