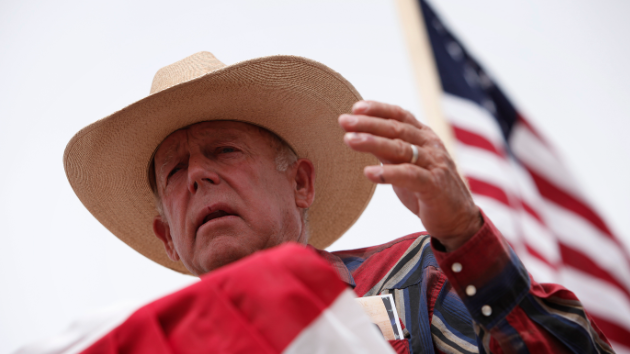 It looks like a new front has opened up in Cliven Bundy‘s war against the US government.

This Saturday, angry residents of San Juan County, Utah, plan to illegally ride their ATVs through Utah’s Recapture Canyon—an 11 mile-long stretch of federal land that is home to Native American archeological sites—because they don’t think that the federal Bureau of Land Management should have designated that land off-limits to motor vehicles. The protest was meant to be a local affair. But on Thursday, Bundy, the rancher who wouldn’t pay the feds grazing fees and sparked a gun-drenched showdown in Nevada, called on his supporters to join the anti-government off-roading event, E&E Publishing’s Phil Taylor reported. Bundy, whose crusade against the federal government became tainted by his racist comments, is looking to spread the cause from cattle to cross-country cruising.

“We don’t expect any violence,” San Juan County Sheriff Rick Eldredge told the Denver Post last week.  Others aren’t so sure, especially since the out-of-staters in attendance could help rile things up—which is what happened during the Bundy stand-off. “This may blow up to be significantly more than they thought,” Bill Boyle, a resident of San Juan and publisher of the San Juan Record newspaper told the Post. “I think there are those who would like everyone with an AK-47 to be here.”

San Juan County residents who plan to attend Saturday’s event are Bundy supporters and Ted Nugent fans, according to an analysis of their Facebook pages by the Denver Post. They also hate President Barack Obama and Senate majority leader Harry Reid, according to the newspaper, which reports that “BLM employees in San Juan County have had windows shot out of their homes and their yards torn up by ATVs in the middle of the night.”

The BLM made the Recapture Canyon land off limits in 2007 because ATVs were damaging the land and folks were vandalizing Native American sites. San Juan County Commissioner Phil Lyman, who is organizing Saturday’s protest, does not believe the feds have the authority to protect cultural resources. He says the goal of the ride is to reassert county jurisdiction in the face of federal “overreach,” according to the Salt Lake Tribune. Federal overreach was the theme that Bundy’s champions in the national conservative media repeatedly pressed—until Bundy’s racist comments became news.

Local officials do not have a good estimate of how many mad-as-hell ATV riders will show up to zoom through sacred Native American land on Saturday. But the BLM has decided to stand back and avoid a conflict for now, as it did several weeks ago on the Bundy ranch in Nevada. Utah’s BLM director Juan Palma, however, said there will nonetheless be consequences for the anti-government activists. “The BLM-Utah has not and will not authorize the proposed ride and will seek all appropriate civil and criminal penalties against anyone who uses a motorized vehicle within the closed area,” he said in a statement.