Update, Monday, May 12, 2014: On Monday, Boko Haram released a video claiming to show about 130 of the schoolgirls it kidnapped on April 15. In the video, the leader of the group, Abubakar Shekau says that the girls have converted to Islam and will not be released until Nigeria frees from prison all Boko Haram members. Via the BBC:

In mid-April, more than 300 schoolgirls were kidnapped from Chibok boarding school in northern Nigeria by gunmen from the Islamist sect Boko Haram. Three weeks later, most of those girls are still missing. More than a week ago, a group of Nigerians launched the Twitter campaign #BringBackOurGirls, sparking global outrage over the attack. And on Tuesday, Secretary of State John Kerry offered to send a team to help rescue the children. Meanwhile, Nigeria’s nightmare gets worse by the day: On Monday, the leader of the group, which has terrorized the country for years, threatened to sell the girls off as slaves, and on Tuesday, Boko Haram kidnapped another eight girls. But let’s back up a minute. What is Boko Haram, exactly? And why do its members kidnap schoolgirls?

What is Boko Haram? Boko Haram is a group of Islamic fundamentalists based in northern Nigeria that has been terrorizing the country since 2009. The group believes Western culture is sinful and wants to return the country to the pre-colonial era of Muslim rule. To that end, Boko Haram has attacked government targets, including military checkpoints, police stations, highways, and schools, as well as churches, mosques, the UN building, and, recently, a bus station in the capital city of Abuja. Over the past five years, Boko Haram has slaughtered roughly 5,000 Nigerians whom the group viewed as pro-government. Here is a map of Boko Haram attacks over the years, via Business Insider: 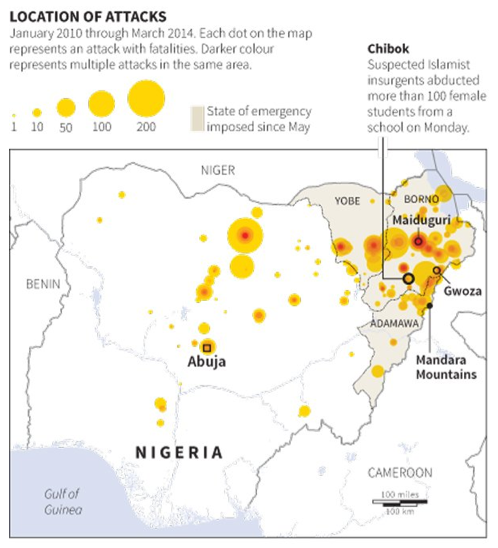 What gave rise to the group? Boko Haram has roots in the 1970s-era Islamic revival in the region, but was founded in 2002 by a Muslim cleric named Mohammed Yusuf, shortly after Nigeria’s transition from dictatorship to democracy in 1999. The Boko Haram ideology—disseminated through a mosque and Islamic school Yusuf set up—gained traction in post-dictatorship Nigeria because many northern Muslims saw Western-style democracy as a scheme to disenfranchise them; voter turnout is higher in the Christian south than in the Muslim north. Persistent extreme poverty in the region has reinforced the notion that the government, which the group believes has been corrupted by Western values, cares more about enriching itself than helping Nigerians, and it has helped drive Boko Haram recruitment over the years. It’s hard to say how many Nigerians the group counts as members, but the Nigerian security forces claim to have killed thousands of them.

Nigerians have labeled the group Boko Haram, which loosely translated means “Western education is a sin.” But that’s not what Boko Haram calls itself. Its official name is Jama’atu Ahlis Sunna Lidda’awati wal-Jihad, which in Arabic means “People Committed to the Propagation of the Prophet’s Teachings and Jihad.”

Has the group ever attacked Americans? No. But Boko Haram has threatened to attack the United States, which it calls “a prostitute nation of infidels and liars.” And the group has kidnapped Westerners before.

Why did the militants kidnap the schoolgirls? In an effort to scare Nigerians away from Western education, Boko Haram and other militants have attacked 50 schools over the past year, killing more than 100 schoolchildren and 70 teachers. Thousands of students and teachers across the northern part of the country have been forced to flee their schools because of the violence.

This is not the first time Boko Haram has kidnapped girls, either. Just two weeks before the Chibok abduction, 25 young girls were kidnapped by the Islamist militants from the northern town of Konduga. Those girls are likely still being held captive. And Boko Haram abducted handfuls of children last year, as well as Christian women, whom the group converts to Islam and forces into marriage. But the Chibok kidnapping “is the largest number of children abducted in one swoop in the country,” Nnamdi Obasi, a senior Nigeria analyst for the International Crisis Group, told Mother Jones this week.

Some of the girls have reportedly been married off to the militants. On Monday, the leader of Boko Haram threatened in a homemade video to sell some into slavery:

How did the Chibok attack play out? Here is Michelle Faul, of the Associated Press, who interviewed one of the girls who was able to escape:

She says that when the gunmen came to her dormitory, they were sleeping. This is before dawn. These men came in, they had uniforms. They said, “Don’t worry. We’re soldiers here to help you.” And she said it wasn’t until that they were outside and…started setting fire to the school and shouting…”God is great,” that it suddenly dawned on them these were not soldiers. These were Boko Haram.
[…]
You can imagine the conditions that they’re in [now]. They were taken initially to the Sambisa forest, dense forests, humid heat, blocks of malaria-carrying mosquitoes. They’re probably drinking water from rivers and streams that [are] not clean. We’re told they’re kept on the move. Every couple of days, they’re moving.

Have any of the girls escaped? Nigerian police report that 53 of the girls have escaped, but 276 remain missing. Here is the AP’s Faul again, explaining how some of the girls managed to flee the terrorists:

The girl I spoke with was able to escape on the first night. She said that they were loaded onto trucks. It was dark. In the dark, some of the girls clung to low-hanging branches overhead. This was an open-back truck. She said she hesitated. And then one of the girls said, “Me, I’m going. If they shoot me, they shoot me, but I don’t know what else they might do to me if I don’t go.” So this girl jumped down, and the girl I spoke to jumped down. She said she ran into the bush, and she said, “I ran and I ran.” And she said, “That’s how I was able to save myself.”

What is the Nigerian government doing to rescue the girls? The Nigerian government claims that it has deployed aerial surveillance over the forest and that it has soldiers on foot searching for the girls. But from the start, Nigerian security forces made a pretty weak effort to find the girls, Mausi Segun, a researcher for Human Rights Watch based in northern Nigeria, told Mother Jones last week. She says the military did not make use of information provided by parents and locals in its rescue efforts. Desperate parents took to the forest themselves to search for their daughters.

Meanwhile, Nigerian President Goodluck Jonathan waited three weeks before publicly acknowledging the abductions and admitting he had no idea where the girls might be. The tepid response by the government has sparked a string of protests in Abuja. (First lady Patience Jonathan recently alleged that women protesting in Abuja against the government’s weak response to the Chibok abductions had fabricated the kidnappings.)

What is the rest of the world doing to help rescue the kidnapped girls? On Tuesday, the Nigerian government accepted a US offer to send a team of military and law enforcement officials to help the search and rescue effort. The United Kingdom will send a similar team. China and France have pledged assistance, too.

In the wake of the kidnapping, the rest of the world was slow on the uptake. Only after Nigerians criticized the international media’s initial indifference to the massive kidnapping did the foreign press start covering the attack. Since then, global outrage has grown by the day. The Twitter hashtag #BringBackOurGirls has been tweeted more than a million times. On Wednesday, First Lady Michelle Obama tweeted her support.

Our prayers are with the missing Nigerian girls and their families. It’s time to #BringBackOurGirls. -mo pic.twitter.com/glDKDotJRt

How is the Nigerian government fighting the broader Boko Haram insurgency? Jonathan has vowed to defeat Boko Haram, but the insurgency is deadlier now than at any point in the group’s history. In the the first few months of 2014, the Islamist militants have already killed 1,500 people.

As Mother Jones reported last week, one reason the Nigerian government has not been able to stem attacks by the group is that the military does not coordinate with security forces in the countries that border northern Nigeria—including Cameroon, Chad, and Niger—where Boko Haram hides out. And the military’s expenditures are not tracked, so it’s hard to tell how much of the $6 billion a year the country spends on defense actually goes toward fighting Boko Haram.

The United States provides about $1 million a year in aid to the Nigerian military, as well as $3 million in law enforcement assistance. And the US military will soon start training Nigerian special forces to fight Boko Haram.

Update, Thursday, May 8, 2014: Boko Haram killed more than 300 people in an attack on a northern town of Gamboru Ngala this week, the New York Times reported Wednesday night. There were no security forces in the town because they had all been drafted to search for the missing girls.

Update 2, Wednesday, May 21, 2014: On Wednesday, President Obama notified Congress that he has sent approximately 80 US military personnel to Chad to aid in the recovery of the kidnapped Nigerian school girls.