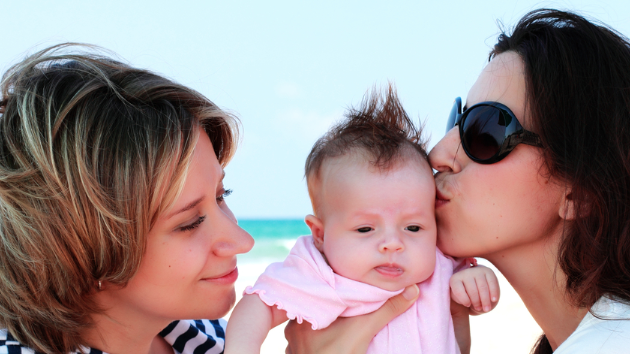 Kentucky Gov. Steve Beshear filed an appeal last week in federal court defending his state’s ban on same-sex marriage, after a federal judge invalidated a portion of the law earlier this year. In the appeal, the state argues that legalizing interracial marriage in 1967 made sense because those unions made babies, but gay couples should not be allowed those same rights. Why? Because that would harm Kentucky’s birth rate.

“Kentucky’s marriage laws are rationally related to the state’s interest of preserving the traditional man-woman marriage model,” the appeal reads. According to the state, the case for legalizing same-sex marriage in Kentucky is different from Loving v. Virginia—the landmark 1967 Supreme Court case that invalidated state laws banning interracial marriage—because “man-man and woman-woman couples cannot procreate” and Kentucky has an interest in encouraging procreation in the name of promoting “long-term economic stability through stable birth rates.”

The state claims that marriage benefits cost the state money, and stable birth rates offset that cost. However, the appeal does not cite any research supporting this, nor does it provide any evidence that legalizing same-sex marriage decreases the birth rate. The appeal does not mention the economic impact of same-sex couples having children through alternative means, such as artificial insemination, nor does it address the costs to the state of allowing infertile heterosexual men or women to get married, allowing straight couples who don’t want children to get married, or housing foster children. (In 2012, Kentucky had almost 7,000 children in foster care, according to the latest government data.)

“The argument is ridiculous,” says Greg Bourke, one of the plaintiffs in the case, who has been with his husband for 32 years (they married in Canada a decade ago) and has two adopted children. “This argument is not only offensive to same-sex couples, but is equally insulting to opposite-sex couples who are unable to have children, choose not to have children, or are beyond childbearing years.” James Trussell, a Princeton University economics and public affairs professor who has co-authored more than 350 scientific publications, primarily in the areas of reproductive health and demographic methodology, says that the state’s argument “sounds like nonsense.” (Beshear’s office declined to comment on the case.)

This is hardly the first time that states have tried to cite procreation as a reason that same-sex marriage shouldn’t be legalized. Earlier this year, after Utah’s ban was knocked down in federal court, Republican Gov. Gary Herbert’s appeal also cited birth rates as a reason to defend the state’s ban, arguing that states that have legalized same-sex marriage, like Massachusetts, have low birth rates. The Utah appeal conceded, however, that those statistics “do not prove a causal link between same-sex marriage and declining birthrates, [but] they do create cause for concern.”

In February, a federal judge ruled that Kentucky must recognize legal same-sex marriages performed outside of the state. Gov. Beshear, a Democrat, was forced to hire outside counsel to defend the state’s ban after state Attorney General Jack Conway, a fellow Democrat, refused to defend the ban, calling it discrimination. (Earlier this year, Attorney General Eric Holder said that state attorneys general are not obligated to defend laws they believe to be discriminatory.) After the Supreme Court struck down a key section of the Defense of Marriage Act last year, state laws banning same-sex marriage began falling like dominoes. Camilla Taylor, marriage project director at Lambda Legal, which advocates on behalf of LGBT clients, says that since that decision, every judge that has considered the constitutionality of marriage bans—14 in all—has rejected procreation-related arguments.

“Kentucky already has a problem with perception throughout the country of being backward and ultra-conservative,” notes Bourke, the plaintiff in the case. “Here was an opportunity for a Democratic governor to make a progressive move, and he chose to bow to political pressure instead.”