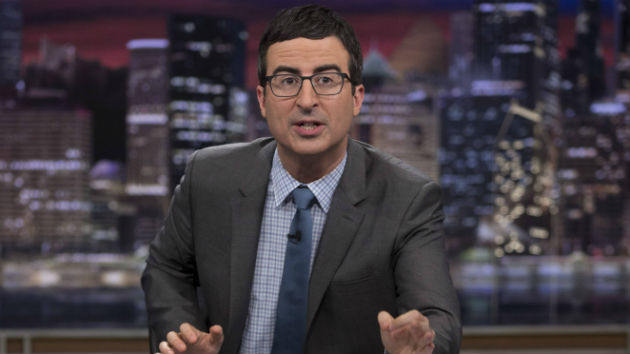 On Sunday’s episode of HBO’s Last Week Tonight, host John Oliver and his crew got… graphic.

During one of the segments, Oliver discussed the state of the American political attack ad, and argued that as more money floods into the system, the quality of the ads declines. He said that the only way attack ads could get any worse would be if they were shown on cable TV, which doesn’t have to abide by network content standards. To demonstrate the point, the LWT crew made a pair of fake attack ads for the Kentucky Senate race between Alison Lundergan Grimes and Senate Minority Leader Mitch McConnell.

“For too long, politics in Washington have been dominated by old, white, wrinkled dicks,” the narrator says in the fake anti-McConnell ad. “And no dick is older, whiter, or wrinklier than Mitch McConnell’s.”

And then viewers are treated to a shot of an old, wrinkled penis that is supposed to represent Mitch McConnell.

Try unseeing that. You can’t.

Anyway, I talked to Oliver on Tuesday to get the inside scoop on the humor and the horror that is his show’s old, wrinkly attack ad. Here’s an excerpt of our conversation:

MJ: Whose idea was it, if you recall, and whose penis did you use?

JO: Okay, those are two excellent questions. The first one, I’m not sure, and it might help to just [go with] collective responsibility. I don’t want to go with a sort of “I am Spartacus” moment but I think plausible deniability might be useful at that point. The second is the much more interesting question. And that is that, of course, you do need to cast a penis. And to do that you have to be presented with a selection of penii—I don’t know if that’s the collective term. And so then what you’re looking for—it’s amazing—when you look at then you start judging them for the purpose, because you want something that is funny but not sad. Because, you know, a sad penis does not help the comedy. No, it makes you think about the person the penis is attached to. So really, you just want a representative old man penis. And I’m not sure that sentence…has ever been said out loud before…We got to one that we liked, and the owner of that penis was generous enough to model it for us.

MJ: How did you get to one you liked? Like, what is the process of “getting” penii?

JO: We went through photos. It was basically the penis version of a headshot.

JO: Models, basically. And you go through and say, “This one’s good, this one’s good, let’s get down to a short-list. Okay, it’s between these three. Um. I like this one.” And then what you do is you make a decision, you walk out of a room, and you stare out a window and question what the fuck you’re doing with your life…That’s basically how it goes.

MJ: I’m assuming you weren’t in the room when they shot it?

JO: I actually wasn’t because we were having to write…But apparently the man was very happy…I just came back and our editor, she had to live with that footage for a few days, but she did a fantastic job.

MJ: Has she recovered, psychologically?

JO: Yeah, she was very good. She’s called Cori [McKenna], and she actually edited both the commercials…The other commercial was basically a chainsaw massacre in a mine involving a kitten, and I think she found that slightly less alarming to cut together than a sequence of beautiful tracking shots of an old man’s junk.

So there you have it.

My full interview with Oliver with be featured on Friday’s episode of the Inquiring Minds podcast, so stay tuned.